What I missed in the AFL this weekend

What did we miss with Round 1 of the AFL? Was it the story of a comeback by a team?

Was it listening to a coach explain how the tactics were spot on, or that the team did not play up to their potential?

As the games unfolded on the screen what I missed was the crowd. At this time when we are told to keep apart and to have places closed, it was jarring to see the empty seats in the stadiums. We see sport as a place where people gather – and here we saw none.

In an ordinary week around 320,000 people would have been coming together to watch the AFL games. In part, this shows the social nature of humans, the need to congregate and socialise, to be part of a community.

To be part of a gathering is what makes the game the game as we think and feel it. In my personal life, going to the pub to meet some friends and then move to the local soccer stadium.

In the US going to a football game and meeting the people who set up the barbie and eat and drink hours before the game starts, to be in the stands where the passionate supporters of Columbus Crew gather before and during a match, or at the away Millwall where the hostility of the home fans is blatant.

The crowd can be a pain. People can drink too much and puke where you stand; they can abuse players in ways that have little to do with the game, the transport from the ground can be cancelled, your snack can be spilled by a stray elbow all over your new coat, your ears can be abused by tonally deaf singers.

To be part of a crowd during the match is to become part of an organism. It can seem to bend a match’s narrative to its will, it can make and affirm that a player can ‘walk on water’, that it can make time stand still or quicken. We are in a place of sweet balm.

Now, we watch the game from the TV, where we sit in a room and make sure we keep our distance from others. Where the noise from the TV is not the susurration of thousands, but the echo chamber of umpires, players and trainers. Where the game feels less the start of the season than the resumption of pre-season games.

We have been told to self isolate. We cannot be part of a collective in the normal manner. Yet, we are in self-isolation a new form of collective.

We can affirm, support and share in ways that will help us get through the isolation and loneliness. 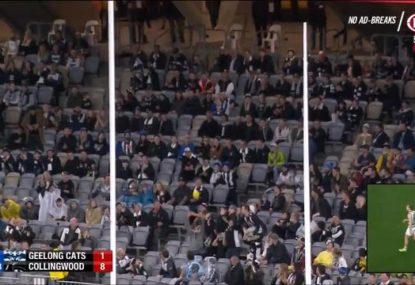