Australian football has many detractors. For a variety of reasons, that might be said.

Domestically the elite AFL level of the game is perhaps regarded jealously. To put the game down, there’s some well worn lines that get trotted out.

Ironically this weekend, a retired American NFL punter with a high profile in his homeland has dispelled one of those myths about our homegrown game.

The easy putdown that we so often hear is that in 160 years, the game of Australian football has struggled to break into New South Wales and Queensland. So what’s to think that it could have international appeal? The suggestion is that no one outside of Australia can fall in love with the game unless they grew up with it.

And then along came Pat McAfee. 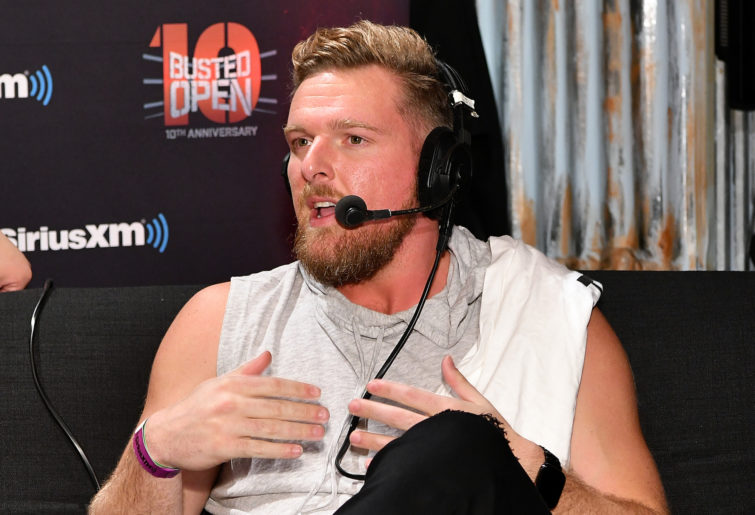 American sports analyst Pat McAfee is a new fan of the AFL. (Photo by Slaven Vlasic/Getty Images for SiriusXM)

He is a retired punter for the Indianapolis Colts, who since his retirement in early 2017 has developed a profile as an American football and wrestling analyst, plus as a stand-up comedian as well as appearing on nationally syndicated radio.

With many sports shut down due to the current Covid-19 pandemic, in the early hours of Saturday morning Indianapolis time, McAfee stumbled upon some live sport. Fremantle were taking on Essendon in a game he’d never before seen in an empty 55,000-seat stadium on a field that is as foreign to McAfee as are the rules of this game.

There’s nothing familiar. No crossbar goals. No rectangular field. No formation plays or offside concepts.

And yet, this first game has made an impression despite the absence of crowd-generated atmosphere. McAfee posted a series of tweets in the first quarter, including this one.

I’ve watched one quarter of Aussie Rules Football and I already know that this sport was supposed to be my calling back in the day.

This was supposed to be my sport.

When my child arrives in the next couple yrs, his ass is gonna be punting & punching balls all around the house.

And the next day he continued.

Last night I was introduced to the @AFL.. I don’t know how I’ve gone this long not knowing it existed.

The game has certainly made an impression.

As it is, I’ve followed international Australian football for about 20 years and have spoken with many men and women from around the world who have fallen in love with a game played professionally on the other side of the world. It can and does happen. So many have regretted that they didn’t have access to the game as they grew up.

The point being that the all-round skill requirements are a feature. Many people grew up playing volleyball, or basketball, or football, or rugby, or gridiron. However, in Australian football, they find a sport where they can combine pretty well all the skills they’ve developed across a broad range of sports in just one game.

For the AFL, this weekend has already been worth it from this promotional perspective. Alas, we now see a major clampdown on activities and the AFL is postponing its season.

The AFL would have loved to provide more content for another couple of weeks at least to the sports-starved world. We can only assume that as the southern hemisphere moves towards winter that normal sporting activity will likely resume in the northern hemisphere before it does here.

We can only hope that by May 31 the authorities have pulled the trigger at the right time and a local resumption is foreseeable. However, May 31 is the best part of ten weeks away and I seriously doubt that we’ll be resuming prior to winter.