There are two ways to improve the A-League’s exposure via free-to-air television.

The first is an opportunity when the league becomes a 12-team competition, and the second requires a forced change.

1. Two Friday night games
When Macarthur FC becomes the 12th A-League team, there will be six games each weekend for the first time in the competition’s history.

Each season to date, the A-League has played its five games each round in separate timeslots across the weekend, which has maximised exposure for each club and Fox Sports.

Playing six games, however, will be more difficult, as there is no clear position for an additional timeslot.

The summer heat already regularly makes 5pm and 4pm games unfair for players and spectators, so a new timeslot earlier in the day, such as 3pm, is unthinkable. Second, the unfriendly time for spectators of 6pm Sunday already hurts, so a similarly unfriendly time – such as 8pm Sunday night or Thursday night – would only exacerbate low crowd figures.

If there is no room for a new timeslot, two games will need to be played simultaneously, or at least overlap.

Saturday night is traditionally reserved for the big games, such as derbies, so Friday presents an exciting opportunity: the free-to-air timeslot. This time, however, it would be better targeted at viewers and be a more valuable piece of content.

With two games to choose from, the free-to-air broadcaster would decide state-by-state which of the two games is preferable.

This state-by-state arrangement occurs with the AFL for the same reason of maximising each club’s exposure in its home state.

This set-up would mean fans can see their team play around a third of their games on FTA, which is effectively double the current number to keep fans engaged.

In addition, the A-League is showcased at the start of each round as the Friday night broadcast gets people’s attention and promotes the four remaining matches. 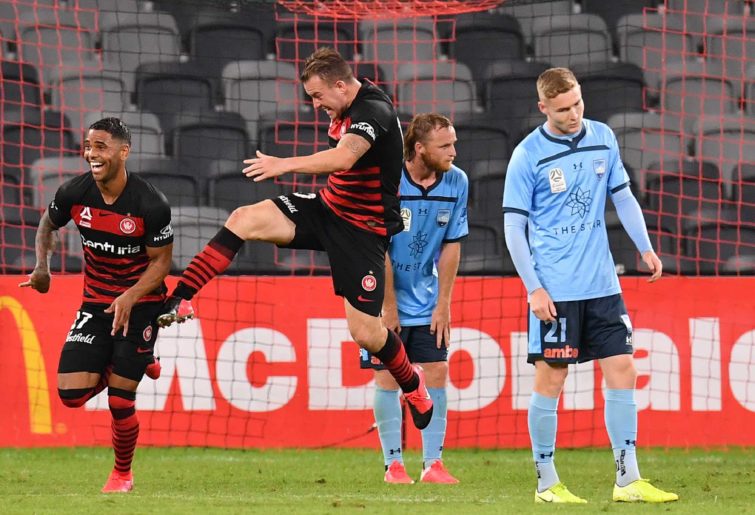 2. SBS is a better home than the ABC
Presuming the three commercial channels are not interested in paying Fox Sports for access to one game a week, the only option is for one of the government broadcasters (ABC and SBS) to show it.

The ABC is the main government broadcaster and generally gets around double the ratings of SBS, but SBS is a better home for the A-League.

First, SBS has the historical and cultural link to football. SBS’s long history of covering football is well known to football fans in this country – there is a reason it was referred to as ‘soccer bloody soccer’. Its multicultural foundations link it perfectly to the world game and the A-League needs to connect with these roots.

Second, SBS (probably because of its traditional links) covers today’s world of football better than the ABC. Unfortunately, SBS’s weekly television program ‘The World Game’ only covers European leagues and international football, and therefore conspicuously does not cover the A-League, but it is still a good thing that this football-dedicated program exists at all. On the ABC, the only dedicated sports program, ‘Offsiders’, barely mentions the A-League or football more broadly.

These two suggestions would allow fans to see their team play around a third of their games on FTA television on Friday nights, through a broadcaster in SBS that is the spiritual home of football in this country.

It would allow the A-League to connect both with its grassroots base and provide access to new fans, and therefore strengthen its future.