What is happening at Hull City?

As the world game comes to an abrupt halt with the outbreak of the coronavirus, Hull City sit 21st in the Championship, only two points away from the relegation zone.

The Yorkshire club, who were in the Premier League as recently as 2017, now sit in a precarious position if and when the season resumes. But after finishing a reasonably comfortable 13th last season, despite early wobbles in the season, how has it gone so wrong for the Tigers this campaign?

Well, the first half of the season wasn’t going too badly, with a win on New Year’s Day propelling Hull to eighth in the Championship, only a point outside of the play-offs. They had also scored 40 goals by that stage, second most behind QPR out of teams not in the top six. But then it went very bad, very quickly.

Three losses in a row in the league in the rest of January took Hull firmly out of the play-off hunt, with mid-table mediocrity looking the most likely destination as only an extraordinary run of bad results could threaten this Hull side with a relegation battle. But on January 31, the deadline day for the winter window, things went from bad to worse at the KCOM Stadium.

With safety surely all but assured at this stage, Hull City owner and chairman Assem Allam decided to cash in on his two most prized assets, with Kamil Grosicki heading to West Brom in a deal worth £900,000, as well as talisman Jarrod Bowen moving to West Ham for a record £18 million. A loan move for Peterborough attacker Marcus Maddison softened the blow somewhat, but the club had just lost its star player and its second best player in the matter of hours.

However, Hull were nowhere near as safe as Allam thought, with the club almost solely reliant on Bowen and Grosicki to provide the entire attacking threat of the team before their departure. A deeper delve into the stats proves just how integral the two attackers were to the Tigers’ season. Up until his move to the Hammers, Jarrod Bowen had played in every minute of Hull’s season with a direct contribution in over 60 per cent of the side’s goals.

It is clear that Bowen was the key creator in this side, but experienced Polish winger Grosicki also chipped in with six goals and five assists (second to only Bowen’s tally in the squad) as well as 1.9 key passes per game, even higher than Bowen’s 1.5 and 12th best in the league. If there was a player that could potentially fill the massive boots left by Bowen, it was Grosicki, but the 31-year-old was also cashed in on by Allam. 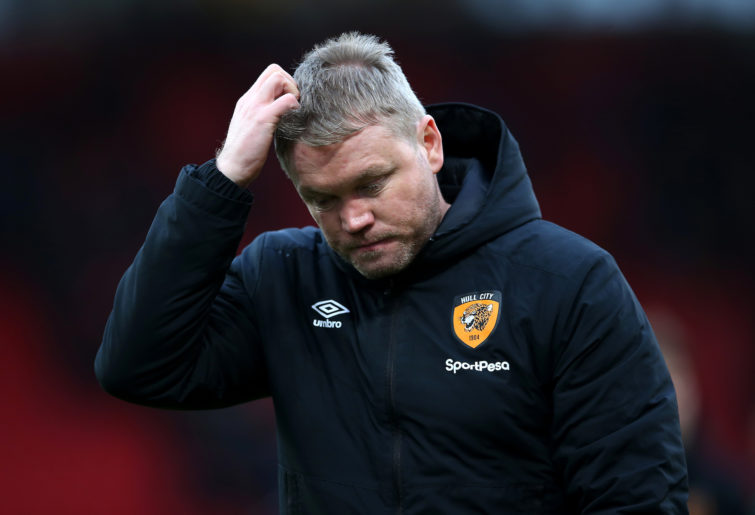 Hull boss Grant McCann has a challenge on his hands. (Photo by Barrington Coombs/EMPICS/PA Images via Getty Images)

Marcus Maddison was signed on loan from League One side Peterborough to provide Grant McCann’s side with some form of attacking relief, but his underwhelming numbers since joining the Tigers, just one goal and no assists in seven league appearances, leaves a lot to be desired for in attack. Since a New Year’s Day victory over Sheffield Wednesday, they have scored just nine goals in 11 games, joint worst in the league with Wednesday.

But that isn’t even the worst of it. Since that win over the Sheffield club, they are yet to win a game, with nine losses and two draws between that clash and their most recent 5-1 loss to Stoke. In that period, they have conceded 29 goals, six more than any other side, and that includes four occasions in which they have shipped four or more goals. They have also only picked up two points, which is seven less than any other team in the Championship and the least across any team in England’s top four divisions in that period.

When football resumes in a number of months, Hull will face very much an uphill battle for survival. After the sale of their two most influential players in Bowen and Grosicki, they lack the goal threat to score themselves away from the drop, nor do they have a sturdy enough defence repel the likes of West Brom and Bristol City, who they still face this season. Their next game, whenever it is played, is possibly the most crucial game of the season as they go head to head with relegation rivals Charlton Athletic.

In hindsight, it is easy to say that Allam made an extremely risky decision in selling both Bowen and Grosicki in a number of hours, and that risk has embroiled Hull in a relegation battle they simply weren’t prepared for. Only time will tell if Allam’s mistake costs Hull City their status as a Championship club, with the likelihood of Hull becoming a League One club for the first time since 2005 looking more and more likely.

Liverpool continued their unbeaten start to the Premier League season with a 3-1 victory over Arsenal at Anfield. The Gunners made a few changes from the side that beat Leicester City midweek as Mikel Arteta looked to go to Anfield and get a result.

The battle between the PFA and A-League owners underlines the challenges faced by football in Australia. It’s time the PFA show some leadership and deal with reality.