Back in 2009, the great French thinker and anthropologist Claude Levi-Strauss died at the ripe old age of 100. One of his most influential works was a book about mythology entitled The Raw and the Cooked.

Levi-Strauss looked for structures of thinking and behaviour which were repeated from one era to another, and he crossed and re-crossed the academic borders between sociology, anthropology and philosophy in his study of the myths of so-called primitive cultures.

He was a pioneer who helped show that those cultures were not so primitive after all.

“What I tried to show… is that people whom we usually consider as completely subservient to the need of not starving, of continuing able just to subsist in very harsh material conditions, are perfect capable of uninterested thinking; that is, they are moved by a need or a desire to understand the world around them, its nature and their society.”

Far from being raw in their very direct relationship to their surroundings, these makers of early mythology were ‘cooked’ – they used their creation stories to understand the world around them.

It is not so different now, in the world of professional sports. While rugby teams still need the most basic attitude of ‘eat or be eaten’ when they step out on the field, they also need to see a bigger picture – to understand how they are going to play and how their opponents will try to play against them.

The best sides can play in the bloody raw, but they are always fully cooked in the top two inches.

Coaches look for players who have been seasoned by their experiences on the levels below Test rugby – ready to emerge into the overpowering heat of the kitchen without being charred by the new environment.

The two primary candidates for the Wallaby number 6 position from the Australian conference-leading Brumbies, Rob Valetini and Pete Samu, are not quite polar opposites in this respect, but they are not far off.

Samu’s career has been steady and progressive: four seasons with the Mitre 10 Cup’s Tasman franchise morphing into 29 Super Rugby appearances for the Crusaders, New Zealand’s academy of rugby, followed in 2019 by a return to Canberra, and an opportunity to broaden his chances in the green and gold.

Partly because of injury, Rob Valetini is at a much earlier point in the curve of his development. Back in 2017, he became only the second age-group player to sign a Super Rugby contract while still a schoolboy, but serious knee damage restricted him to a mere 13 appearances in the 2018 and 2019 seasons. 2020 represented his first consistent experience of professional rugby as a starter.

He has had the opportunity to learn lessons off the field in the new setting:

“Being with the Brumbies has helped me read the game better. In an amateur environment, it used to be just about catching the ball and running. Now there’s a lot more detail to the game and where you have to be,” Valetini told the Canberra Times back in 2017.

Rob Valetini is still raw – only 21 years old, but already a hefty 113 kilos and 6’4. Pete Samu is 28 and pretty well cooked, but gives up over ten kilos to Valetini on the scales while conceding three inches in height.

Both players have some weaknesses in defence, but for the purposes of this article we will compare their contribution when the Brumbies have possession of the ball.

Samu has been starting at number 8 for the men from Canberra, and his attacking stats compare favourably with the two leading Wallabies contenders – Isi Naisarani and Harry Wilson:

Now let’s take a look at Valetini’s attacking stats compared to those of two other young blindside flankers in the Australian conference:

The difference in back-row philosophies is immediately apparent. At number 8, both Wilson and Naisarani are heavy-duty workhorses on primary phases, carrying almost three times more than Samu per game. Samu’s work is done further out, off the second or third pass, and that accounts for his much higher average metres per carry.

The Reds will go heavy and tight on the first two carries with Wilson and Salakaia-Loto punching the holes close in. The Brumbies will shift Valetini inside to fulfil the Salakaia-Loto or Swinton role, but the first-phase carry will need to be made by a back (typically Tevita Kuridrani or Solomone Kata) instead of Samu.

The build-up to the Brumbies’ first try of the game against the Chiefs in Round 4 of Super Rugby provided a model example:

Kata cuts up underneath Sam Cane on the first phase, then Valetini wraps around to smash Chiefs number 12 Alex Nankivell off the map on the following play. The Brumbies used their gain-line advantage to score on the very next phase:

Rob Valetini likes to stay high and use his power to bump off the first tackler:

But not all of Valetini’s carries work out as well. Against the Waratahs in Round 7, he found a worthy opponent in Michel Hooper:

Hooper has the strength to stick at the point of contact and hold Valetini up above ground for over five seconds. That kills the momentum of the lineout move stone dead in the first example.

Samu reveals his extra experience in the little details of the game – in re-alignment while waiting for the pass:

Where Valetini overruns the pass and is never a serious receiving option, Samu takes a shuffle step back to ensure he draws the eyes of the inside defence and preserves a little more space outside for Tevita Kuridrani: 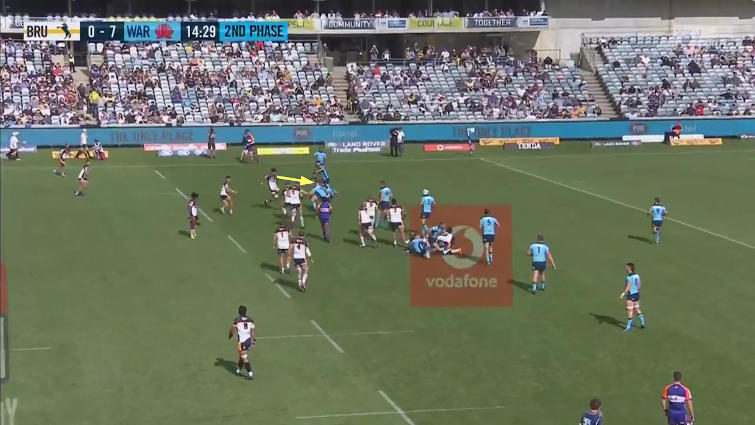 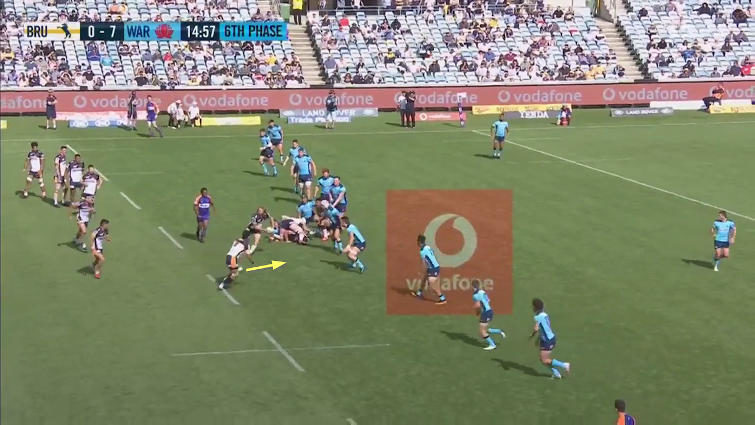 Likewise, at the breakdown:

Both players are slightly offline and need to adjust their angle into the tackle zone, but Samu recognises the urgency of the situation far more quickly than Valetini, so his cleanout is the more successful of the two.

Perhaps it is own-ball lineout which exhibits the difference between the two players most clearly. Rob Valetini is clearly the better athlete, able to hang in the air and take the ball imperiously at the tail:

However, he also makes mental errors: a loose tap destroying the rhythm of a set-piece attack; or a late back-lift at a critical position in the opponent’s red zone:

At the key moment, the Waratah lifter (Harry Johnson-Holmes) is at full extension, while Valetini still has bent arms, despite the Brumbies having the throw: 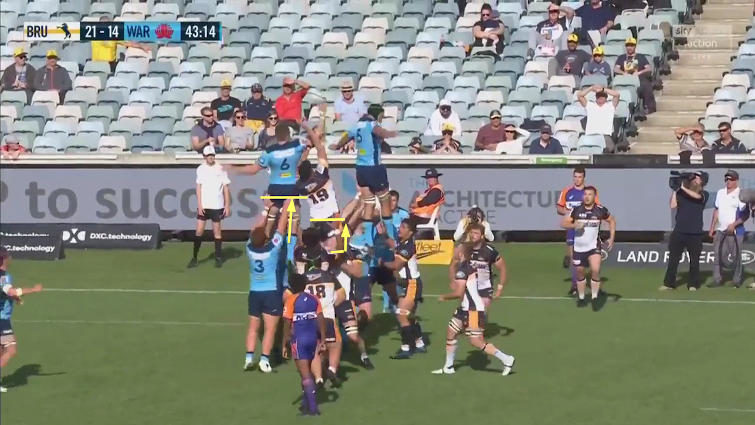 Pete Samu does not have Valetini’s range and only offers a front-jumping alternative, but he is also the go-to lifter in the Brumbies’ lineout scheme:

Whenever you see a forward standing slightly out of the line like this, it means he is one of the most integral pieces of the puzzle, able to lift for a receiver both fore or aft: 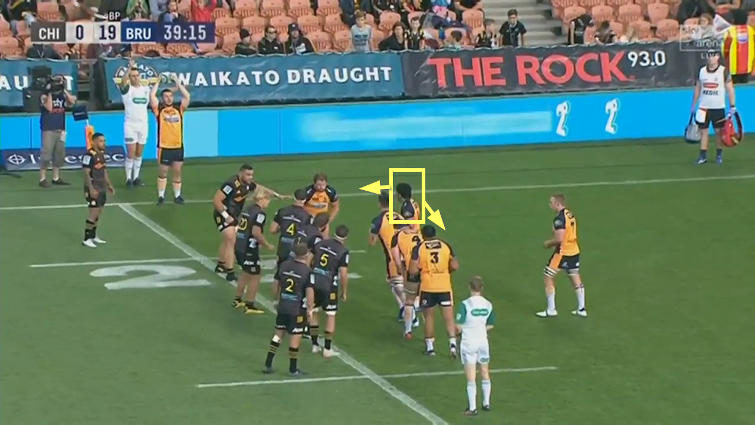 Summary
At 6’4 and 113 kilos or more, Rob Valetini has magnificent physical tools for the job of a modern number 6. By the time of the 2023 World Cup, he may very well be the real deal, but for now he is raw, very raw.

You can have all of the tools that you need, but until there is a real understanding of how the game is played at the top level, those attributes will be inconsistently applied. You will not be fully ‘cooked’.

The rawness shows up in the little details which Valetini knows he has yet to master. It comes to light in the small adjustments – entry lines into cleanout, the timing of a lift at the lineout, the change of body height into a tackle, the realignment needed to provide a convincing decoy in attack.

It is these little details which are now a part of Pete Samu’s armoury at 28 years of age. If the time for Test match football is ever to arrive for him, it must arrive now.

Lachie McCaffrey, Jack Dempsey and Liam Wright may all have something to say in the number 6 debate, too. In time, maybe Lachie Swinton and Pat Tafa will join them.

But for Dave Rennie it’s all about the now, separating the raw from the cooked, and finding out who is really ready to play Test footy for Australia.