Record signing and star striker Christian Benteke had only scored one goal that season, and Eagles fans were desperate for someone to provide the side with a constant goal threat. Scoring ten and assisting eight in his 19 games in the Danish league for Midtjylland gave fans hope that he could be a focal point in attack at Selhurst Park.

However, the Norwegian striker was only afforded four starts between February and March, two of which were in an unnatural position for Sorloth on the left wing, in which he failed to score or assist. He was not seen again for the rest of the season as Palace finished in 11th. Zero starts and 12 sub appearances that amounted to only 173 minutes of football for the Norwegian followed at the start of the 2018-19 season before being loaned out to KAA Gent for the rest of the season in January.

He improved slightly at Gent, scoring three and assisting one in nine appearances, most of which were on an unnatural position on the right wing. In the Belgium Pro League he showed glimpses of the form at Midtjylland that persuaded Palace to take a chance on the young striker. However, another loan at the start of the 2019-20 season for Sorloth has shown just how bright the future is for the 24-year-old. 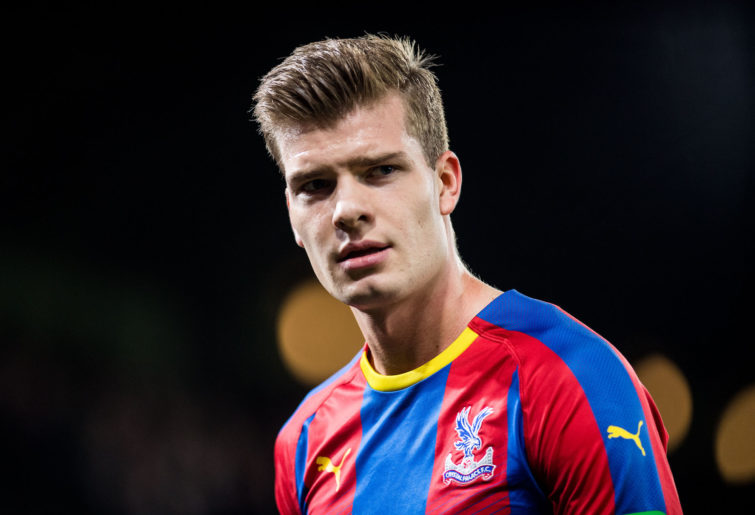 In August of 2019, Palace agreed to loan the out-of-favour striker to Turkish outfit Trabzonspor on a season-long deal. As the season takes an indefinite break due to the COVID-19 outbreak, Trabzonspor find themselves as unlikely leaders of the Turkish Super League, which is largely down to the 19 goals scored by Sorloth so far this season, which sees him three strikes clear in the league scoring charts.

The underlying numbers show an even more impressive side to his game this season. He has provided seven assists for his teammates, which ranks fifth in the league. While he only takes a relatively low three shots per game considering the sheer amount of goals he’s scored this season, 2.9 of them come from inside the box, proving he has efficient shot locations. He also completes 1.8 dribbles per 90 minutes, which is surprising for a player who spends a large portion of the game in the opposition box.

If you compare Sorloth’s numbers to that of the other two strikers predominantly used by Roy Hodgson this season, Jordan Ayew and Christian Benteke, it is clear as to why loaning him out at the start of the season was a mistake for Palace. The combined total of league goals between Ayew and Benteke is less than half of Sorloth’s league goals this season, with both current Palace strikers contributing one assist each compared to Sorloth’s seven in total.

A delve into the underlying stats shows the extent to which Sorloth is outperforming the other strikers at Selhurst Park this season. Neither Ayew or Benteke, with 1.6 and 1.5 respectively, come close to the three shots per game taken by the Norwegian. This gap between is also evident in chance creation, with Ayew’s 0.8 and Benteke’s 0.9 chances key passes per 90 match Sorloth’s 1.2.

There is a valid argument to say that Sorloth’s current numbers couldn’t be replicated in the Premier League, nor do I expect him to score as many goals for Palace next season as he has for Trabzonspor. However, there is little doubt that he offers a better option up front than the current crop of strikers residing at Selhurst Park. And the argument that the Norwegian has had his chance at Palace is simply untrue, as no player can be judged on as few chances as he received at Palace.

With the departure of star man Wilfried Zaha in the English summer looking increasingly likely, a large weight of attacking responsibility will be placed on other Palace attackers next season. Although it is unlikely that the return of Sorloth will be able to fill the shoes left by Zaha, the Norwegian can provide the Eagles with a focal point and constant goal threat up top not seen at Selhurst Park since Benteke’s first season at the club in 2016-17.