The tough-tackling defender doesn’t have the reputation of Zinedine Zidane or Thierry Henry or Didier Deschamps, but his place in World Cup folklore was sealed in the space of 22 amazing minutes at the Stade de France on 8 July 1998.

Thuram pulled on the French jersey 142 times in a glittering international career that spanned 15 years. In 141 of those games he didn’t come close to hitting the net, so wasn’t renowned for his prowess in the attacking penalty area.

Not many around the world would expect him to score, but score he did, twice in fact.

Croatian fans can turn away now.

Let’s set the scene. It’s the 46th minute of the 1998 World Cup semi-final between hosts France and underdogs Croatia. Davor Suker had just given Croatia a 1-0 lead after brilliantly controlling the ball and neatly drilling it past French goalie Fabien Barthez. French hearts sank and Croatia celebrated.

It wasn’t supposed to be like this. France were supposed to see off their opponents easily and were supposed to meet Brazil in the final to try and win their first ever World Cup. But for one minute, the dream turned into a nightmare.

Enter Thuram, who had never scored for his country in 37 prior appearances, and in fact only scored ten career goals in 503 club appearances for the likes of Monaco, Juventus, Barcelona and Parma. 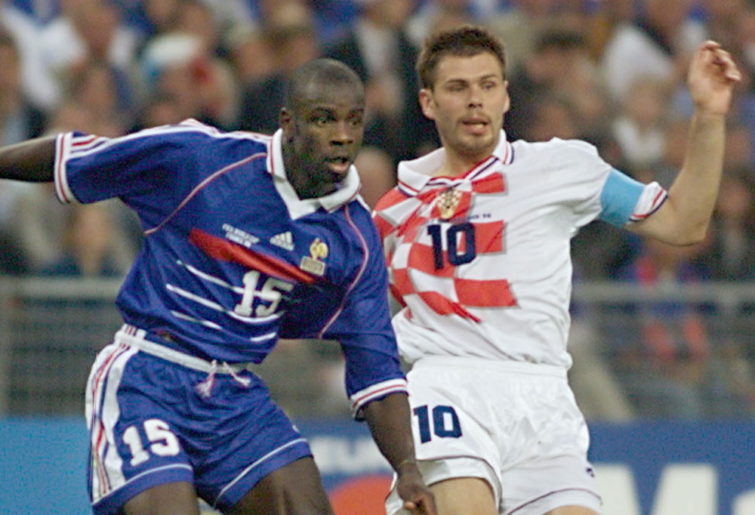 It’s the 47th minute, and barely 60 seconds had passed since Suker’s superb finish. Thuram dispossesses a Croatian defender, then plays a neat one-two with Youri Djorkaeff and calmly slots a right-foot shot past a despairing Marjan Mrmic.

France are level. The dream is alive.

It’s the 69th minute. Thuram is busy down the right wing. He attempts another one-two, this time with Henry. Henry’s wayward pass ends up with a Croatian defender. Thuram bustles his opponent off the ball, something he did regularly over the course of his decorated career. The ball bobbles just outside the Croatian box. Thuram hooks his body and throws his left boot at the ball and watches as it ends up in the bottom right-hand corner of the net.

The crowd roars. France rejoices. Thuram sinks to his knees, wondering why on earth he bothered being a defender. To cut a long story short, France went on to win 2-1 and then thrashed Brazil 3-0 in the final. This was a game where the legend of Zidane was born.

But that is another story. This is the legend of Lilian Thuram.