When you consider that the club’s top 100 game-players and goal-scorers lists means that only 8.25 per cent of all the players who have played for the club make the grade, you realise how elite this group has become.

While no one from the original 1897 team makes the cut, it is extraordinary that seven players who started their careers over 100 years ago are still in the top 100 greatest game-players of all time at Carlton.

In 1920 and before, the clubs played less games, had less players in the team, played fewer finals and did not have the medical facilities available nowadays to maintain their fitness so it is no surprise that the elite list is top heavy in recent champions.

It should be acknowledged that it still takes at least seven years of form and fitness to break into the top 100 game-players list. The two advantages current-day players don’t have is the ability to start your career at a young age and two-way loyalty with the club.

Carlton’s greatest game-player came to the club after already chalking up 89 games, one premiership and three best-and-fairest awards at SANFL club Port Adelaide. Craig Bradley is now 56 years old, but still holds the record for the most elite games of football and the most games played the Blues.

He won three more best-and-fairests at Carlton, played in two premierships and made four All Australian teams. Also an outstanding cricketer, Bradley eventually chose football when he could no longer combine the two sports and captained the Blues from 1998 until 2001.

One of the most popular players of all time – both with Carlton and opposition fans – was the Flying Doormat, Bruce Doull, the second greatest game-player at Carlton. 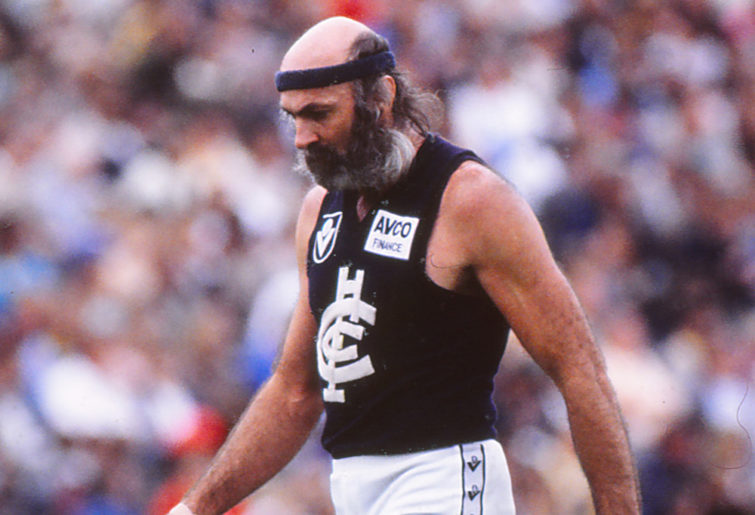 Bruce Doull remains one of the elite Blues. (Photo by Getty Images)

He started his career in 1969. One of the fairest players to ever play the game, Doull was Scott Pendlebury-like in the illusion he created to always have plenty of time to dispose of the ball.

Extremely shy and reserved, Doull rarely spoke to the press, instead letting his football skills speak for him. Now 69 years old, Doull won four premierships, four best-and-fairests and a Norm Smith Medal for best on the ground in the 1981 premiership win. He wore the number 11 jumper in all of his 356 games and holds the AFL record for the number of games in this jumper with no current player close to catching him. He also played 162 consecutive games for the club – another club record.

Number three on the list is the player voted the greatest Blue of all time: John Nicholls. Now 80 years old, Nicholls was recruited from Maryborough with his older brother Don, and played 328 games for the club. He was the first Carlton player to play 300 games and in the nearly 50 years since, has still only been passed by the two players featured above.

Bradley won three best-and-fairests and Doull four, but Nicholls holds the record at five. The trophy at the time was called the Robert Reynolds Trophy, but the name of it was changed to the John Nicholls Trophy in 2004 to recognise his contribution to the club. He figured in three premierships at the club, the first two as captain and the last as captain-coach.

This trio of players – whose careers overlapped – had all finished playing by 2002 and the Blues have yet to find a player who can match their exploits, although Patrick Cripps has now appeared on the horizon. 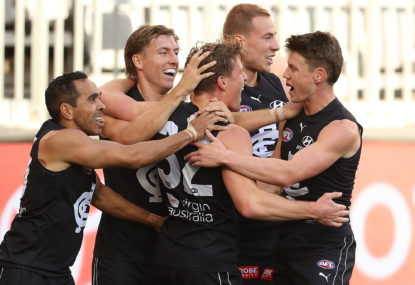