The dynamic nucleus of Paul Pierce and Antoine Walker are on the up, but lack a supporting cast. And the Boston Celtics have been sold by owner Paul Gaston, who had run the team since 1993 and was only given the team from his father. The new owners, the Boston Basketball Partners led by a group of investors, issued a new reign of ownership, away from the Gastons.

Their first matter of business was trading long-time starting point guard Kenny Anderson and current Memphis Grizzlies assistant coach Vitaly Potapenko for Vin Baker, who was tied for the highest-paid player on the team with Antoine Walker.

Baker was no scrub. Some forget he was on the 2000 Olympics team that won gold, but he struggled with alcoholism during this stage of his career.

The season went by pretty quick for Boston fans, the team went just okay, not well.

Fans were getting upset with the lack of depth on the team, because this had been a serious but untouched problem for a long time. Paul Pierce and Antoine Walker were in the middle of their primes, with Pierce receiving All NBA third-team honours, and Walker reaching his third and last all-star appearance. Something had to be done. 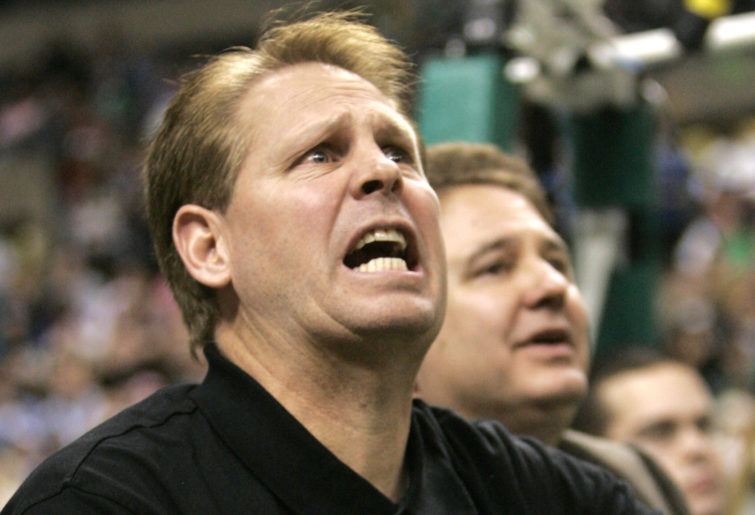 The Celtics had five more losses than last season even with Paul Pierce averaging 26. Still with only the sixth seed, fans were scared that the franchise were going back to another dark period like the late ’90s.

Facing up against Jermaine O’Neal and the Indiana Pacers for Round 1 of the playoffs, Celtics fans were not overly confident their season would continue into the next round. What the Pacers lacked in superstar talent, they made up for in depth with a squad made up of Reggie Miller, Ron Artest and Brad Miller.

This was a direct contrast to the Celtics, who relied heavily on their front court of Walker and Pierce. But then again, the Celtics had Paul Pierce, who dropped 40 in nail-biting Game 1 victory. The series would end in six games, and be remembered for that one play where Pierce buried a three in a trash-talking defender’s face.

But now starts the story of Danny Ainge, who enters the scene as the executive director of basketball operations just before the Celtics get eliminated by the Nets. Scratch that, the Celtics were technically swept by the Nets, who were led by Jason Kidd, with former Celtic Rodney Rogers.

Disgruntled Celtics fans were unaware that Danny Ainge was about to change everything, and did not care if he was liked, especially by Jim O’Brien and Antoine Walker.