Here are my top five knocks by West Indian batsmen that I’ve seen. I would love to see what yours are in the comments.

Then out came the 23-year-old.

Holder batted brilliantly from ball one, fearlessly taking on Stuart Broad and Jimmy Anderson with the second new ball to reach 50 off just 67 deliveries.

Holder formed a 105-run stand with his skipper, Denesh Ramdin, before Ramdin was dismissed with 18 overs left of play. Still, Holder remained calm and composed as he and Kemar Roach batted until the game was mathematically impossible for England to win.

It was an innings of maturity. There’s a fine line between playing your natural game and batting recklessly, and the all-rounder showed he could score quickly, bat for 50 overs, and save a Test.

Holder’s knock would lead him to bigger things, as a few months later he was announced as the West Indies Test captain.

4. Darren Bravo 218 versus New Zealand – Dunedin, 2013
Under an aggressive Brendon McCullum, New Zealand started their home summer with a bang, declaring at 9-609, bowling out the West Indies for 213, then enforcing the follow-on.

Darren Bravo walked in after Kieran Powell was dismissed for 14, with a Kiwi innings win seeming only a matter of time.

The left-hander started his innings confidently, he and Kirk Edwards gaining momentum, before Edwards departed for 59. Bravo then formed another two crucial partnerships, of 122 and 90 with Narsingh Deonarine and Darren Sammy, on his way to his maiden double century.

Bravo would finally depart for 218 – bowled by a Trent Boult off-cutter. His innings had everything – patience, grit, determination, aggression and good temperament. Despite battling for nine and a half hours, Bravo’s disappointment at his dismissal was evident.

New Zealand were 4-79 on track for victory chasing 112 but the heavens in Dunedin opened up and the tourists got away with a draw.

Pakistan were right on top before Devendra Bishoo’s 8-for gave his side a chance, with 345 the target and 121 overs left of play.

Bravo was patient, having faced 258 balls for his 87 in the first innings, and his approach was no different in this knock. While wickets were falling, he took his time and reached his second fifty of the match off 139 balls.

He then switched gears after the fall of the sixth wicket, as he and Holder started to take the game towards the Windies’ favour.

Bravo was given a slice of luck on 96, chasing an outswinger and slicing it just past backward point, and he recorded his eighth Test century. Tragedy would strike for him and the West Indies as Yasir Shah took a screamer off his own bowling, seeing Pakistan win by 56 runs in a thriller.

But Bravo gave the Windies a sniff and it showed the small gains they were making under the leadership of Holder.

Darren Bravo does not get the credit he deserves. While he might not have the flair of his hero Brian Lara, he has been a shining light in an underperforming team for a long time.

All of his hundreds in the red ball arena have been outside of the West Indies – two in Bangladesh, India and New Zealand and a century apiece in Australia and the UAE. 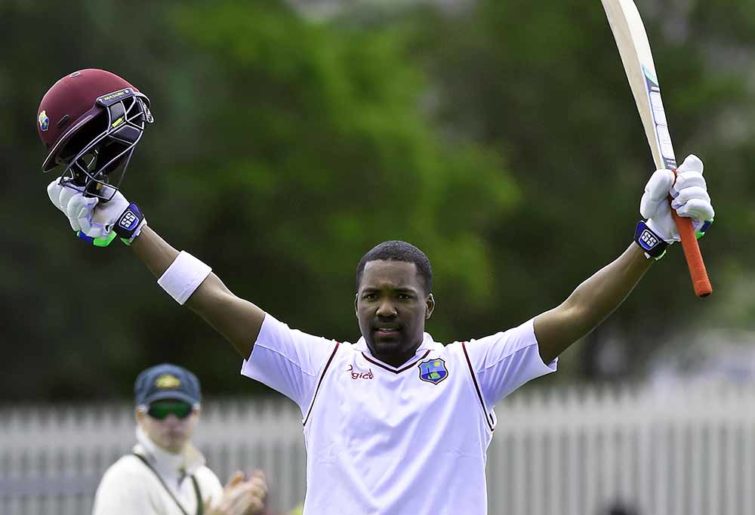 Shai Hope 118 versus England – Leeds, 2017
While Hope’s hundred in the first innings was a quality knock, this second innings effort was on a Day 5 pitch and led to an incredible win.

Chasing 322 off 96 overs, Shai walked in at 2-53 after his elder brother Kyle was run out for a duck. Hope was watchful at first but after lunch he took on England’s main man, Jimmy Anderson, to show that he was here for the win.

His fifty came off just 70 deliveries and despite the dismissals of Kraigg Brathwaite and Roston Chase, Shai was providing hope of an unlikely win.

His constant presence at the crease gave the Englishmen nervous moments as he scored his consecutive ton of the match off 175 balls.

Hope then held an end while Jermaine Blackwood swung the bat around before he was stumped just two runs away from victory.

In the 92nd over, Hope clipped it square for two to pull off the unthinkable in Headingley.

Hope was a nobody in international cricket before this Test, averaging just below 19, before his twin tons got his international career up and flying.

While he hasn’t been able to kick on, he has been one of the most consistent and underrated ODI players of this era.

Kraigg Brathwaite 142 versus Pakistan – Sharjah, 2016
Having conceded the series, the West Indies were playing for pride and in reply to Pakistan’s first innings total of 281, Brathwaite played the innings of his life.

In deep trouble at 4-68, Brathwaite stood firm to build partnerships of 83, 83 and 60 with Chase, Shane Dowrich and Bishoo on his way to his fifth Test century.

He was patient, boring the Pakistani bowlers throughout his innings, with solid defence but punishing the bad balls.

Brathwaite ran out of partners, stranded on 142 not out when No.11 Shannon Gabriel was stumped – the fifth West Indian to carry his bat in Test cricket.

This knock is the best I’ve seen this old-fashioned, gritty opener play and it was a testament to his patience against a quality attack on the subcontinent.

Brathwaite ended up scoring 94 not out in the second innings, as his team won by five wickets and Jason Holder finally had a win as Test captain.