The Roar
9th April, 2020
16
Join the conversation
Advertisement
Write for The Roar

Today sees two of England’s finest ever batsman – and one of their greatest opening partnerships – go head to head.

Jack Hobbs was the second most popular opener in last week’s poll, picked in 40 per cent of sides, while his former partner Herbert Sutcliffe came in at third, ten per cent further back.

Both, it’s no great shock to say, had phenomenal Ashes careers. Jack Hobbs, in addition to being the most prolific batsman in first-class cricket history, also scored more runs in Ashes Tests than any other Englishman, his 3636 bettered only by Don Bradman.

While he did play a mammoth 41 Tests, those runs were scored at an excellent average of 54.26, and Hobbs also has 12 Ashes tons to his name – as well as 15 half-centuries.

Sutcliffe might not have the sheer weight of runs, but his Ashes average is peerless: his 2741 runs came at 66.85. Add in eight centuries and 16 fifties and you have one of the finest openers in the history of Tests between England and Australia.

But only one of these two legends can make the side, so who’s it going to be: Hobbs or Sutcliffe? Make your selection in the form below, and then be sure to reveal your choice in the comments.

Australian cricketer Steve Smith just want to get back to doing what he does best after returning to training with the NSW Blues.

We’ve picked all the batsmen, now it’s time to move onto the all-rounder in The Roar’s greatest Ashes XI of all time.

For the final middle-order spot in The Roar’s greatest Ashes XI of all time, we have a match-up between two former Australian skippers who didn’t mind getting into the contest.

As we continue our journey to create the greatest Ashes XI of all time, today we have one of the best batsmen since Bradman – many would say the best – against the man who played a considerable role in Australia’s cricketing resurgence. 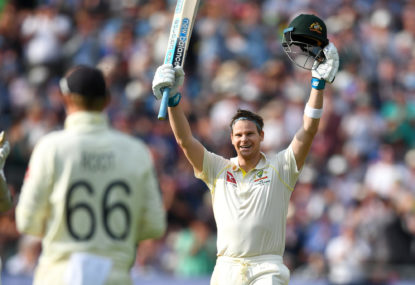 The two opening positions in our greatest Ashes XI of all time have been closely-fought races so far. This one is probably going to be less so.