The missed opportunities of Steve O’Keefe

Who was the most overlooked Australian cricketer of the 2010s?

Glenn Maxwell? David Hussey? Callum Ferguson? Everyone has their favourites.

For many it would be Steve O’Keefe, also known as SOK.

One day some historian is going to sit down and explain to us why O’Keefe played so few games for Australia that decade.

O’Keefe’s emergence as a top-level first-class cricketer in the summer of 2009-10 should have been a godsend for Australia’s national team.

When Shane Warne retired, it was confidently assumed Stuart MacGill would fill the gap until a new champion emerged.

Then MacGill quit early, and Australia floundered looking for replacements. They picked Beau Casson without ever seeming to really believe in him and Casson wound up retiring early.

Cameron White, a batsman who bowled a bit, was converted into a bowler in India of all places and was found wanting.

Jason Krejza was given a shot and took wickets, but leaked so many runs he scared away selectors.

Bryce McGain – who should have played more Tests – got his chance, then was injured, then came back and played one Test, where he was thumped so badly he had ‘never to play for Australia again’ stamped on his passport. Would giving him a second chance have been so bad?

Nathan Haurtiz was tried, more out of desperation than anything else, and actually did okay. But that wasn’t enough for selectors, who think Warnes grow on trees, and he was booted.

Then along came Steve O’Keefe. He emerged in 2009-10 when he took 15 first-class wickets at 30.93. It was encouraging, especially in the Krejza-Hauritz era.

He was picked to play for Australia A against Sri Lanka A over the winter, taking 7-35 in the first game. That was even more encouraging.

This led to him being selected to replace an injured Hauritz in the national squad to play Pakistan in England. If he was a leg-spinner, his figures probably would’ve earned him a spot in the Test team.

And if you need proof of that, Steve Smith was picked as the team’s spinner off the back of summer first-class figures of 21 wickets at 44. And, to be fair, 772 runs at 72. O’Keefe had to watch from the stands. But he did play an international T20.

At the beginning of the 2010-11 summer, O’Keefe took seven wickets for NSW against South Australia, then made the Australian A side to play England and took 4-88, including the wickets of Kevin Pietersen and Alastair Cook, plus top-scoring in Australia A’s first innings with 66.

For the first Test, Haurtiz is dropped and replaced by Xavier Doherty, who had been around for a bit, was in decent form and averaged in the late 40s. Doherty did okay in the first innings. He was tonked in the second and the second Test, and was then dropped.

Australia replaced him with Michael Beer, who had only played six first-class games. Beer was 12th man for two Tests as Australia used four pacemen and Smith.

For the fifth Test they decided to try a specialist spinner and it’s Beer, who gets tonked. Australia lose the Ashes 3-1. England’s spinner Graeme Swann has a wonderful series.

When the 2011 Australian squads for Sri Lanka and then South Africa were chosen, O’Keefe was selected in the T20 squad. But he missed out to Nathan Lyon and Michael Beer in the team.

Let’s recap. Earlier in 2010, O’Keefe was clearly a player closely watched by the selection panel, being picked in several Australia A games. But he lost out on Test selection to Doherty, Beer, Smith and Lyon.

What happened? What did he do? Why did he fall so far back in the pecking order? Was it a behaviour issue? A temperament clash with someone? Did they simply assume he was a T20 specialist because his first-class record was so good?

My theory was that Michael Clarke didn’t rate him. This was the time that Clarke held a great deal of power in Australian cricket and he reportedly had troubles with O’Keefe.

Clarke was also close to Shane Warne, who didn’t rate O’Keefe either. And Warne would continue to not rate him, calling SOK’s occasional Test selections the “safe option” and continually propagating for Mitchell Swepson.

For the 2013 tour of India, Australia pick two specialist spinners: Lyon and Doherty. Maxwell and Smith are picked as spinning all-rounders. Oh, another spinner did join the squad later: Agar, not O’Keefe.

This was one of the worst selected Australian squads of all time, including Shane Watson as a specialist batsman, plus Moises Henriques, even before homework-gate. To make it worse, Lyon was dropped after a poor first Test for Doherty, who played two dud Tests, before being dropped for Lyon. Australia lost 4-0.

The Australian selectors decided to take Lyon and Agar to England and wind up dropping Lyon again in the first two Tests, this time for Agar. Agar plays that one incredible innings with the bat and gets tonked with the ball. Lyon was back in the side by the third Test and he’s never left.

O’Keefe got thumped in the first Test, along with all the other bowlers, and was dropped for a paceman for the second. Australia are thrashed in both Tests. What next?

In 2014-15 O’Keefe took 28 Shield wickets at 23 but lost out on selection as Lyon’s back-up on the 2015 tour of the West Indies and England to Fawad Ahmed, who took 48 first-class wickets that summer. I like Ahmed and wish he’d played more international cricket.

But O’Keefe isn’t forgotten – he toured India with Australia A and took 14 wickets (including Virat Kohli) at 20.  In 2015-16 he took 20 wickets at 24. This was enough to see him back in the Test side against the West Indies in Sydney, grabbing three wickets.

In 2016 he toured Sri Lanka, an old hunting ground. O’Keefe picks up ten wickets in a tour game and makes the side for the first Test, where he three wickets. That was before he was injured, leading him to miss the rest of the series, which Sri Lanka won 3-0.

What would have happened if O’Keefe had stayed on the field? Certainly not five losses on the trot.

Anyway, in August 2016 O’Keefe makes a dill of himself at the Steyne Hotel. But his first-class form that summer is decent and he’s back in the team that summer for the SCG Test against Pakistan, taking four wickets in a victory.

More importantly, he’s selected for the tour of India. The other spinners picked in that squad were Lyon, Agar (who took 16 wickets that summer at 28) and Swepson (ten wickets at 43). The hard-luck story was Holland, overlooked despite taking 50 wickets.

The first Test is O’Keefe’s greatest moment, bowling Australia to a famous victory in Pune with his 12-70. 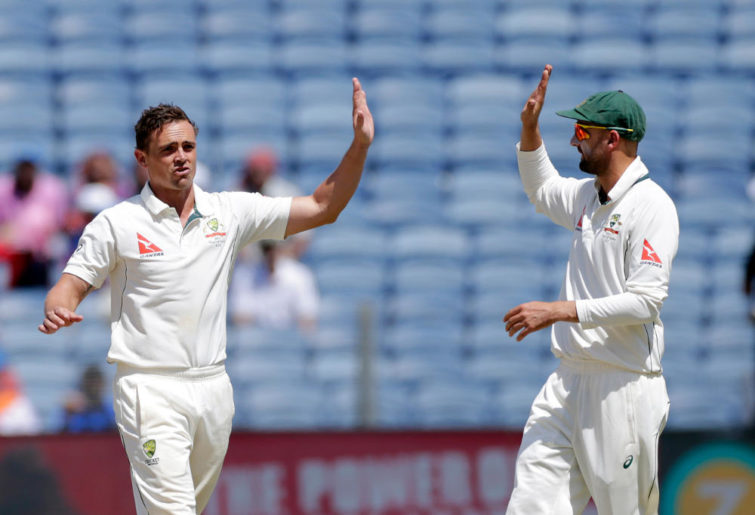 They were declining returns, but surely he’ll keep his spot for the Bangladesh tour?

Nope. Agar is brought in instead. Oh, it must be because O’Keefe a dill of himself again at an end of season awards dinner in April. Fair enough.

But apparently it wasn’t this issue – it was his form, according to Trevor Hohns: “Whilst Steve O’Keefe bowled well in Pune, he did not maintain this level in the remaining matches of the series and we believe the timing is right for Ashton to enter the set-up and test his all-rounder ability.”

He’d been dropped, on grounds of form, for Ashton Agar and Mitchell Swepson. Huh?

An injury to Josh Hazlewood (and a shock first Test defeat to Bangladesh) sees O’Keefe recalled to the Australian side for the second Test. He took 0-79 and 2-49 as Australia bowled their way to victory.

So he’s back? As Lyon’s back-up, at least? No. That’s been it for O’Keefe at international level. 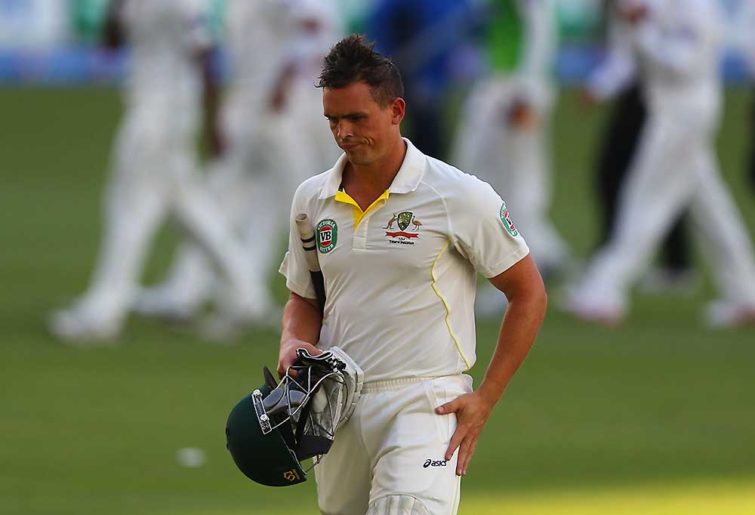 In the 2019-20 summer Mitchell Swepson was added to the squad for the third Test but didn’t play. O’Keefe took 16 wickets at 22.

At the end of the season, NSW told him he won’t be offered a contract so he quits first-class cricket.

My take on this? Nathan Lyon is a great bowler. Steve O’Keefe was a very good bowler. If O’Keefe was ever not picked because of behavioural issues, they should have said so. Like they did for David Warner, Cameron Bancroft and Smith, and James Pattinson, Usman Khawaja and Watson. But that was never the case.

Every single time O’Keefe was overlooked for national selection despite his stats demanding it, it turned out badly for Australia. Every single time. The 2010-11 Ashes, 2013 in India, the second Test in 2014 in the UAE, the first Test in 2017 in Bangladesh, and 2018 in the UAE.

SOK was hard done by through missing out on these Tests. But Australia suffered more by not picking him.

Is O’Keefe Australia’s most hard-done-by cricketer of the 2010s?

Of course not. That’s Glenn Maxwell.

But best of luck, SOK. You’ll always have Pune.