Our next period is the Diehards. Although rugby union did not completely shut down during World War Two as it had during World War One, it nevertheless once again went through a severe contraction.

Consequently, this is the diehard era, because adherents of the code had to work hard to hold onto what they had. It was also during the 1940s and ’50s that the game became associated, perhaps unfairly, as belonging to the private schools.

It was a good time to be on the land. Farm produce was booming, and many farmers were making such good money that they could afford to send their kids to private schools in the metropolitan cities around Australia. This added to the perception in NSW and Queensland that rugby was the preserve of private schools.

Alternately, rugby league was booming everywhere. The English Challenge Cup of 1954 saw a world-record rugby crowd of over 102,500. The first rugby league World Cup was also held in 1954, 33 years before the inaugural rugby union edition.

While rugby union struggled to attract 22,000 fans to three Wallabies-All Blacks Tests in 1951, a staggering 67,000 fans attended just one of three Kangaroos-Chanticleers Test.

At many stages throughout the ’50s, although there were only four rugby league nations – Australia, Great Britain, France and New Zealand – they were all capable of beating each other regularly. The ’50s was probably the high watermark for international rugby league, although no-one knew for sure at the time.

In this confronting atmosphere, rugby union had to circle the wagons and the diehards had to hang tough. There was plenty of outstanding talent on display throughout the ’40s and ’50s, but as with previous eras, these players rarely hung around long enough before either taking the lure of rugby league or settling down to a career.

Also, as we get closer to players we saw play, the bios will get shorter, especially as we are dealing with fewer war heroes!

1. Nick Shehadie
Born 1926, 30 Tests 1947-58, Randwick and NSW
At the time of his retirement, Shehadie was our most capped Wallaby. Shehadie was one of the most revered and respected ex-Wallabies, noted for his honest toil and hard-working ethic. Later a successful businessman and public office holder as lord mayor of Sydney.

2. Nev Cottrell
Born 1927, 14 Tests 1949-52, Brisbane Souths and Queensland
‘Notchy’ was honoured as Queensland’s all-time hooker in 1999 despite the considerable counter-claims of Eddie Bonis (1930s) and Tom Lawton Junior (1980s). A lightning fast striker of the ball, skilful scrummager and splendid in the tight-loose and a dogged tackler. A persistent knee injury forced his premature retirement. With more game time, he might well have become our best ever hooker.

3. AJ Baxter
Born 1920, nine Tests, 1949-52, Sydney Easts and NSW
Nicknamed ‘Tarakan Jack’ for surviving severe burns as a sailor aboard HMAS Tarakan in World War Two, he was regarded by the Kiwis on his tour there in 1949 as one of the best props to to play in NZ. High praise indeed!

4. Tony Miller
Born 1929, 41 Tests 1952-67, Manly and NSW
‘Slaggy’ epitomised the kind of Wallaby we all wanted to be: honest, tough, resolute, indomitable. Moved to prop in the ’60s to begin an entirely different career. Played club first grade until he was 44. Was also the most capped Wallaby at the time of his retirement.

5. Rex Mossop
Born 1928, five Tests 1949-50, Manly and NSW
The loss of ‘Moose’ to rugby league was incalculable. He had three massive qualities too often missing in Australian rugby. He had bulk (height and weight), he had tremendous talent, and he possessed high-octane mongrel. We missed him more than we realised. After retirement he became the TV face and voice of rugby league, delighting us with his malapropisms, mangling the English language to our continual amusement.

6. Bill McLean
Born 1918, five Tests 1946-47, GPS and Queensland
A member of the aborted 1939-40 tour, McLean was a commando during the war before being awarded the captaincy of the 1947-48 touring team. Sadly, a broken leg in the sixth tour game ended his career. He was a brave and resourceful back-rower of rare technical skill. One of the famous McLean clan, the father of Peter and uncle to Jeff and Paul.

7. Col Windon
Born 1921, 20 Tests 1946-52, Randwick and NSW
Nicknamed ‘Breeze’ for his speed, he was for a long time our most acclaimed openside flanker until George Smith came along. During the war, he occupied the precarious position of signals runner between various HQs, noted for his incredible acceleration. Incredibly fast to the breakdown, he played like a back in the open, understandable considering his previous position of winger. Younger brother of pre-war back-rower Keith.

9. Des Connor
Born 1935, 12 Tests 1957-59 (plus 12 Tests for New Zealand) 1962-64, Brothers and Queensland
There can’t be too many guys who can say they played for both the Wallabies and All Blacks, especially as an Aussie. Queensland’s greatest scrumhalf, Connor quit Australian rugby union when it became obvious the biased NSW Test selectors were going to dump him in favour of the young gun from south of the border, Ken Catchpole.

Not particularly fast over the ground, but short and stocky, he had a very long and quick pass, and was an early exponent of the reverse pass. Also an excellent general play kicker, powerful defender, capable of good line breaks, using his nous and strength. Later an innovative Wallabies coach. 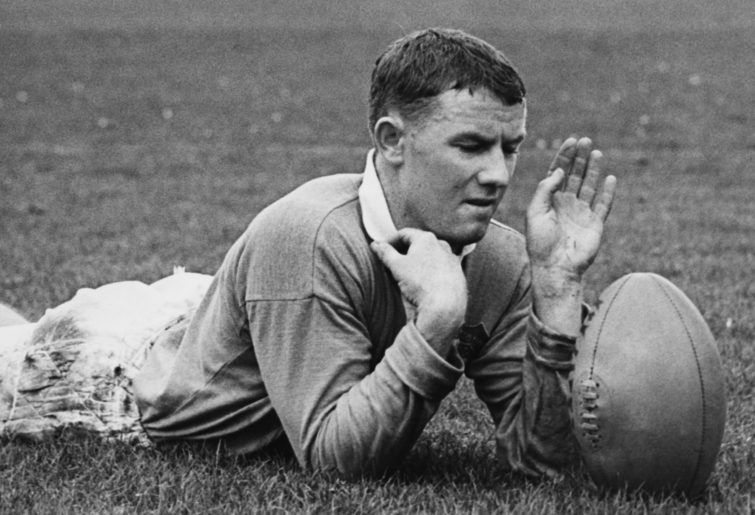 10. Dick Tooth
Born 1929, ten Tests 1952-57, Randwick and NSW
Was disgracefully dumped as Wallabies captain in 1957. It turned out to be one of the dumbest decisions of all time, as a young and inexperienced back line struggled for direction and cohesion on the 1957-58 tour. Incredible utility value, having occupied three positions in the Wallabies’ back line: fullback, centre and flyhallf. A versatile and intelligent player, as befitting his later career as a surgeon.

11. Rod Phelps
Born 1935, 23 Tests, 1955-62, University, Sydney Norths and Parramatta and NSW
The ‘Phantom’ was another versatile player. Before the invention of Polyfilla, he was Mr Fixit. Need a fullback? Phelps is your man. Need a centre? Pick Phelpsy. But winger was his best position. Ultimate team man who did everything at a consistently high level.

12. John Solomon
Born 1929, 14 Tests 1949-56, University and NSW
Yet another capable of playing multiple positions: winger, centre and flyhalf. Like his surname, he was a wise leader. A chunky, resilient, scheming three-quarter. Also became a doctor.

13. Trevor Allan
Born 1926, 14 Tests 1946-49, Gordon and NSW
Another who was horribly missed when he defected to league. He later became a highly respected commentator of rugby union on the ABC. After regular skipper Bill McLean was injured early in the 1947-48 tour, Allan took over the captaincy, and was acclaimed as the boy captain. Allan was a dramatic attacker with fast, incisive running and a deadly tackler. Regarded to this day as our finest outside centre.

15. Terry Curley
orn 1938, 11 Tests 1957-58, Newcastle Wanderers and NSW
Tall, long, swarthy and lanky, he crammed 11 Tests into just two seasons, then just as quickly, he was gone, deciding to become a Marist brother. Was a long-time revered coach of the Joeys first XV. Possessed flawless handling, prodigious kicking and immaculate tackling, coupled with outstanding poise and calm for one so young. There are some who claim, even judged on just 11 Tests, he might possibly be our best-ever fullback.

2. Ken Kearney
Born 1924, seven Tests 1946-48, Parramatta and NSW
Nicknamed ‘Killer’ for his perfectly coiffured hair and dapper dress, plus a mean streak on the pitch. Kearney later achieved huge acclaim as the man who started the St George Dragons’ run of 11 successive rugby league premierships, being captain-coach of the first five (1956-60) and coaching a sixth in 1961. Although slow around the paddock, he possessed a fearless and ruthless attitude. He had a magnificent football brain and indomitable will.

3. Bob McMaster
Born 1921, seven Tests 1946-48, Rockhmpton, Brothers and Queensland
McMaster spent his entire Wallabies career terrified officials would find out he was a professional wrestler. But somehow he got away with it! His wrestling background made him an indefatigable scrummager of immense strength and endurance. Nicknamed ‘Wallaby Bob’ because he was a great team man, especially when the fists were flying in a fight breakout.

4. Dave Emanuel
Born 1934, nine Tests 1957-58, Sydney Easts and NSW
His height and bulk was most useful at a time when Australia didn’t have too many big men. Quiet and reserved off the field, he never shirked a stink on the pitch. Was totally committed as a player.

6. Keith Cross
Born 1928, 19 Tests 1949-57, Randwick and NSW
An all-round, energetic flanker. Was another shock omission from the 1957-58 tourists, when the selectors went for too much youth, leaving the team massively undermanned in quality experience.

7. Charles Wilson
Born 1931, four Tests 1957-58, University and Queensland
‘Chilla’ was one of the fastest and most enterprising flankers of his time, but yet another victim of state politics and poor selection choices. He played one Test in 1957, before becoming one of many inexplicable omissions from the worst selected Wallabies team of all time. Came back in 1958 as captain to NZ. Go figure!

8. Norm Hughes
Born 1932
It was tough to leave out Kevin Ryan, considering his later heroics in rugby league, but Hughes deserves his place here. Sound, reliable and speedy, with safe hands courtesy of his schoolboy days as a fullback. His height was most useful at the back of the lineout.

9. Cyril Burke
Born 1925, 26 Tests 1946-56, Newcastle Waratahs, Merewether-Carlton and NSW
Legendary scrumhalf of the ’40s and ’50s, more or less as good as any who came before or after. Perhaps his greatest strength was his dangerous, incisive running from the scrum base.

10. Arthur Summons
Born 1935, ten Tests 1957-59, Gordon and NSW
Became one half of a famous photo (and later statue) from the 1963 rugby league grand final, alongside Norm Provan. He was a smart, resourceful, gutsy and totally committed inside back. 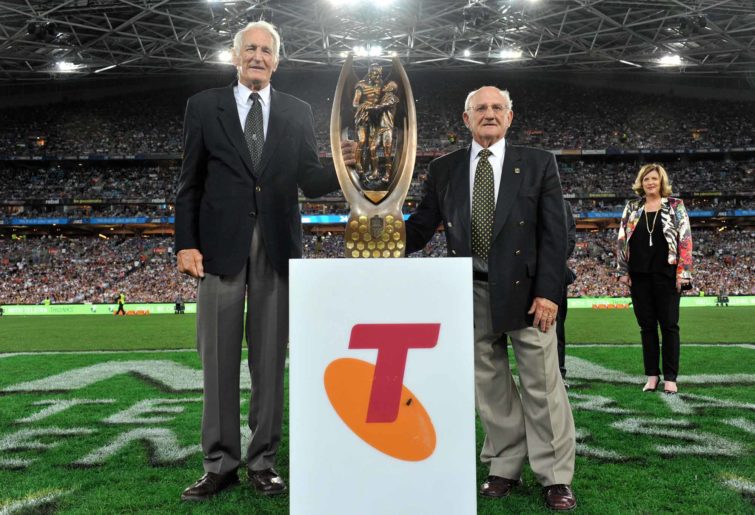 11. Gavin Jones
Born 1931, 12 Tests 1951-56, University and Queensland
A red-haired version of the All Blacks’ Grant Batty. Jones was a small man but blindingly fast, especially on the break or chasing. Not a noted tackler, though.

12. John Blomley
Born 1927, seven Tests 1949-50, University and NSW
The last known Wallaby to operate in a war zone, Blomley was a medical officer and surgeon in Vietnam in the late ’60s. Blomley was an outstanding centre – a big, strong strider who created many gaps, timed his passes to perfection and tackled soundly.

13. Jim Phipps
Born 1931, 11 Tests 1953-56, Gordon and NSW
Another big, long-striding centre and strong defender. Also appreciated for his speed and anticipation. Probably the only international rugby player born in Java.

14. Eddie Stapleton
Born 1930, 16 Tests 1950-58, St George and NSW
Bullocky winger, considered outstanding during the 1950s, appreciated more by Kiwis and South Africans than his fellow Aussies. Preferred the direct path to the try line, either through or over an opponent.

15. Brian Piper
Born 1925, 12 Tests 1946-48, Randwick, Gordon and NSW
A stylish fullback, highly rated just after the war. He based his game on safe catching and catching, and good positional sense. Early on the 1949 tour of NZ, he fell several floors off a hotel escape balcony, fracturing his arm and ending his tour. There was a whiff of scandal surrounding the incident! Yet another who later became a doctor.