Now we come to our next era, and fans will become increasingly familiar with the players.

I have referred to this era as the Reformists because two significant reformists movements occurred during this period.

In 1962 New South Wales was so concerned at the drop in standards of Queensland rugby that they refused to play them. This was a slight that Queensland never forgave and used as motivation to overcome NSW over the next several decades. Queensland thus began the slow climb that would ultimately see the state team thrash NSW 42-4 in 1976. The underdogs were now the masters.

In addition, QRU bought land to build their own stadium, which they named Ballymore, and began regular contact with NZ provinces (before NSW) in order to help lift their own standards. But it was a slow process.

Then, in 1973, the Wallabies were sensationally beaten by lowly Tonga, sending Australian rugby into a spiral confronting the fact that the standards of the game nationwide had slipped precipitously. In 1974 ex-Wallaby Dick Marks was named as national coaching director, a position he held until 1995, to help coordinate and lift coaching and playing standards around the country.

As a direct consequence of this, the 1984 grand slam team became the first Wallabies team to be undefeated in tests in the northern hemisphere. The 1991 and 1999 World Cup champions were also beneficiaries of this process that began way back in 1974.

So let’s look at the teams.

2. Peter Johnson
Born 1937, 42 tests 1959-72; Randwick and NSW
Although hookers throwing into the lineout only became popular in Johnson’s last years as a Wallaby, in all other respects he was probably the outstanding hooker – a fast striker and excellent scrum technician – and played like an extra backrower around the paddock. He also possessed a wicked sense of humour.

3. John Thornett
Born 1935, 37 tests 1955-67; University, Sydney Norths and NSW
Our most universally acclaimed and respected captain to the end of last century, Thornett completed our greatest front row until the 1980s and 90s came along. A deep thinker, modest and committed in all he did.

5. Rob Heming
Born 1932, 21 tests 1961-67; Manly and NSW
A latecomer to test rugby, Heming made up for lost time to become the most acclaimed Wallabies lock until the end of the century. He earned a reputation for spring-heeled jumping. From a standing jump he could wrap his hands around a goal post’s crossbars.

6. Greg Cornelsen
Born 1952, 25 tests 1974-82; Armidale, New England and NSW; Teachers-Norths and Queensland
They called him ‘every mother’s favourite son’. Cornelsen was a gentleman off the field but a lion on it. For most of his career he looked like a bearded bushranger, possessing speed to the breakdown, creative with ball in hand (or under jersey), a good lineout jumper, industrious in rucks and mauls, a strong tackler and a tireless 80-minutes player.

7. Greg Davis
Born 1939, 39 tests 1963-72; Drummoyne and NSW
Davis didn’t have to be a native-born to give 100 per cent for his country. He was 10 years in Australia, his entire Test career, before returning home to New Zealand. He was a destructive tackler and phenomenal dynamo who carried the Wallabies during their many dark days.

9. Ken Catchpole
Born 1939, 27 tests 1961-68; Randwick and NSW
Still regarded as our best scrum half, Catchy had a long and accurate pass. A solid defender despite his diminutive size and possessing an intuitive flair for where the next point of attack should be, he was constantly backing up and was an excellent leader. 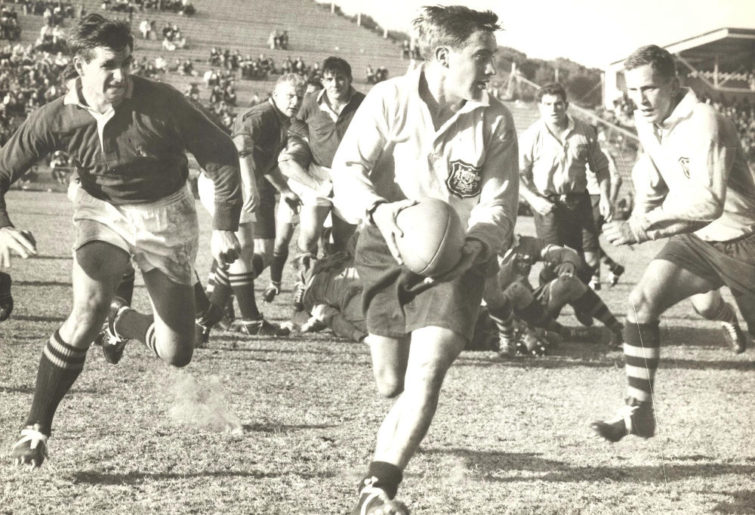 10. Phil Hawthorne
Born 1943 21 tests, 1962-67; Newcastle Wanderers, Randwick and NSW
He debuted as an 18 year old, displaying maturity and composure beyond his years. Small but possessing excellent mental agility and superb hands, he tackled well, had a long, quick pass and kicked brilliantly in all capacities.

11. Paddy Batch
Born 1953, 13 tests 1975-79; University and Queensland
A burly, bullocking winger of powerful physique, determination and pace made him an ideal finisher. But he also scored many tries through opportunism, using his bulk and swerve to break tackles, displaying high leg drive and a well-timed fend.

12. Geoff Shaw
Born 1948, 28 tests 1969-79; Kiama and NSW; University and Queensland
Built like a panzer tank but still agile on his feet, Bunter was an early exponent of the ‘crash ball’ and also igniting second-phase play. He was deft in breaking tackles with subtle swerves and making sweet, well-timed passes.

13. Dick Marks
Born 1942, 17 tests 1963-67; University, Teachers-Norths and Queensland
In an era of few quality Queensland players, Marks stood out like a light beacon on a lonely shoreline. He tackled and ran strongly and was rarely caught out of position.

14. Mike Cleary
Born 1940, six tests 1961; Randwick and NSW
He had only one season in the Wallabies, but it was enough to show his class. He was a pretty boy, but a tough pretty boy, combining size with speed. He played for Souths Rabbitohs as an amateur in 1962 while he represented Australia as a sprinter at the Perth Commonwealth games.

15. Jim Lenehan
Born 1938, 24 tests 1957-67; Wagga Wagga, Riverina and NSW
In 1957-58 Australia took two talented 19-year-olds to the northern hemisphere, Lenehan and Terry Curley and left another talented 20-year-old at home – Ken Thornett. By 1960 only Lenehan was left of the trio, with Curley becoming a Marist brother and Thornett defecting to league. Lenehan was fast, a punishing defender and a prodigious punter of the ball with a high work rate.

1. John Meadows
Born 1949, 22 tests 1974-83; Kiwis-Hawthorn and Victoria; Brisbane Wests and Queensland
English-born, he played way above his light weight for a prop. Meadows was the most technically proficient Wallabies prop of his era, and a wholehearted performer around the paddock.

2. Peter Horton
Born 1945, 21 tests 1974-79; Armidale, New England and NSW; Teachers-Norths and Queensland
Another English-born player, he lobbed into Australia in 1969, quickly taking to all things Aussie, especially a take-no-prisoners attitude. Full of ginger, spirited and combative, he was just the kind of guy Australia required up front.

3. Ray Prosser
Born 1942, 25 tests 1967-73; Sydney Norths and NSW
Highly regarded by his peers, Prosser was considered a guru of scrummaging technique at a time when many Wallabies props were technically inept. He was highly skilled in the art of mauling and a fine forager.

4. Reg Smith
Born 1948, Sydney Norths and NSW
Country born, robust, enthusiastic, tough as old hide, Smith was a true workhorse in every sense of the word, revelling in the rucks and mauls. He and Fay made a great combo for club, state and national team.

5. Garrick Fay
Born 1948, Sydney Norths and NSW
Although he possessed the physique of a colossus, Fay was a gentle giant. Nevertheless, the selectors relied upon his bulk and height for most of his career. He was an outstanding lineout jumper and committed team man. He was lucky to have Reg Smith beside him at club, state and test level.

6. Tony Shaw
Born 1953, 36 tests 1973-82; Brothers and Queensland
One of my favourites. Rough around the edges but totally committed to the cause. Crazy Eyes was an inspirational leader who didn’t know the meaning of the word ‘quit’. Indomitable and durable, his nickname mimicked his playing style.

7. Ray Price
Born 1953, eight tests 1974-76; Parramatta and NSW
Pricey possessed many of the qualities often missing among Wallabies. He was aggressive to the point of being mad. He had no respect for reputations. He was long-haired, bearded, mobile, lanky, industrious, fearless and impervious to trash talk, pain and injury. A huge loss to rugby league.

8. John O’Gorman
Born 1936, 18 tests 1961-67; University, Manly and NSW
Cyrano, as he was nicknamed, was a tall, dexterous backrower. He displayed the speed around the paddock of a former three-quarter, which he had been. He missed many tests due to his medical studies.

9. John Hipwell
Born 1948, 35 tests 1968-82; Newcastle Wanderers, Armidale, New England and NSW
Hippy learnt the hard way to become a competent scrum half behind poor packs. Consequently he possessed many fine skills those who came after him lacked – an ability to make good use of bad ball, uncomplaining and resolute, always looking for attacking opportunities.

10. Paul McLean
Born 1953, 30 tests 1974-82; Brothers and Queensland
The sad thing about McLean is that he came from an athletic, talented and prestigious rugby family, but he himself was perhaps a little too conservative in his play. He had the whole range of skills for a No. 10 or No. 15 but tended to underplay his hand too often. He was also an excellent goal kicker when in form.

11. Alan Cardy
Born 1945, 9 tests 1966-68; Drummoyne and NSW
An absolute flyer and absolutely dangerous when he had the ball with any room to run. Cardy was three times rugby sprint champion 1966-68, beating national sprint champion Bob Lay in 1968, who also played rugby.

12. John Brass
Born 1946, 12 tests 1966-68; Randwick and NSW
Highly accomplished, fleet of foot, quick hands and a marvellous positional player, Brass became a dual international. He was a model of fundamentals, a coach’s dream who rarely made a mistake and did everything with consummate flair.

13. Beres Ellwood
Born 1937, 20 tests 1958-66; Wagga Wagga, Riverina and NSW
Ellwood was at one time ranked the top centre in the world. I have placed him in his less frequent centre position to include him in the exercise. A sound rather than spectacular player, he was an unsurpassed defender but alert for a break.

14. John Cole
Born 1946, 24 tests 1968-74; Randwick and NSW
Not quite as handsome as Cleary or as big or as fast, but a close second. Cole had excellent positional sense and was a great finisher. He was a fine craftsman with a high workrate.

15. Russell Fairfax
Born 1952, eight tests 1971-73; Randwick and NSW
In reality Arthur McGill has the stats, but Fairfax wins on potential, or ‘if only’. Indeed only two of his eight tests were at fullback, with the rest at flyhallf. But I think many of us remember Fairfax in his first year of rugby league in 1974 – long blond hair flowing, spindly legs effortlessly darting past despairing defenders time and again, thrilling spectators almost every time he touched the ball. That’s the Fairfax we all want to remember.