Epics: Why some games are remembered for generations

After reviewing some of the greatest games in AFL history, I have narrowed down the five reasons that lead a match to be deemed an ‘epic’.

1. A close finish
Just about any game that goes down to the wire will be remembered. We love a close finish – at least when your team is not involved.

After sitting on the edge of your seat for what may feel like a 45-minute fourth quarter, there is no better feeling than seeing your team in front when the siren sounds.

These are the games that see one set of fans full of joy and the other in complete despair, and for that, they just never seem to be forgotten.

2. A compelling backstory
A common theme among many great games is the story behind the team having the success, seen in recent years with the Western Bulldogs’ 2016 finals series.

Fox Footy’s list had the grand final against Sydney at number four and the preliminary final against Greater Western Sydney as the second greatest game since 1970.

The contest at Spotless was up there with the best ever, but the so-called ‘last dance’ did not endure the same last-minute drama.

Yet despite other matches, such as the 2010 and 2012 grand finals, having much tighter and more tense finishes, the Dogs’ famous run from seventh on the ladder is held in higher regard.

Whether it be breaking a drought or an underdog bandwagon, everyone loves a feel-good story, and therefore when these fairytale scenarios come true, they will be looked back upon for generations to come. 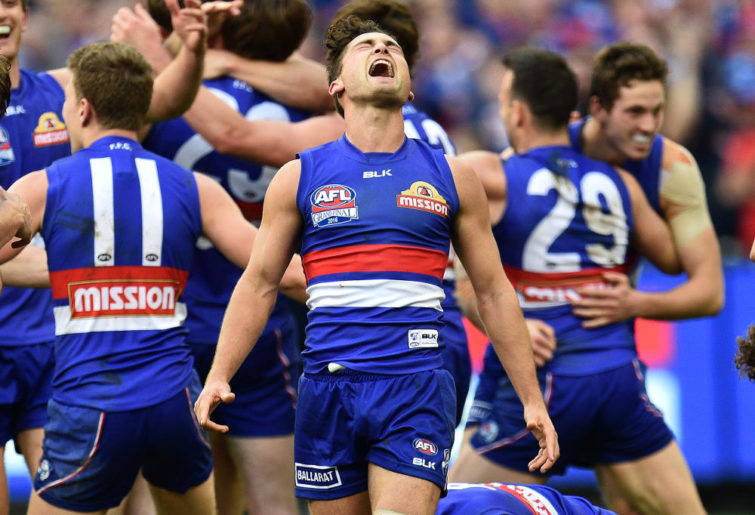 There are so many ‘what ifs’ in the course of Aussie rules that would have altered the record books. If the ball had have bounced left for Stephen Milne, if Leo Barry didn’t cling on to his famous mark, or if Dom Sheed’s set shot swayed just a couple of metres to the right.

These fine lines are sport at its purest and in almost every great game, one or two big moments often act as the distinction between elation and devastation.

4. Everything to play for – no next week
The feeling of having no chance to redeem yourself next week and knowing that everything is on the line brings about additional pressure.

Finals games, and more specifically preliminary and grand finals – being so close to that elusive premiership – are the most-watched, most talked about and in the majority of cases the most remembered matches.

Footy fans relish the drama that September brings, with games that bring communities, families, and friends together – matches that are forever replayed by triumphant fans.

If football were to ever scrap the finals series and employ a top of the table premier, I don’t know if I could even follow the sport anymore. Surely the AFL could never consider this, even during a global pandemic, because fans live for those last four weeks of the season.

5. Rivalries
A built-up history or a sense of hatred between two sets of players and fans makes great games even better. Famous games where rivals played against each other often rank in the ‘best games ever’ conversation.

They need not even be historic rivalries, as the 2016 prelim showed, with incidents such as Toby Greene kicking Luke Dahlhaus in the face to the trades involving Ryan Griffen, Callum Ward, and Tom Boyd.

Still, many great finals have established the famous rivalries we know today. For Carlton and Collingwood there’s the 1970 grand final, and for Hawthorn and Geelong the 1989 decider.

Rivalries are an essential part of sport and whenever great foes meet in a big game it only adds to the occasion.

While few games meet each of these five categories, to be considered an epic you will need to tick a few of them. Although for many the best games are the ones where your team was victorious, especially in September, I would love to hear what anyone else factors into their view of the best ever game of footy.