With Greenberg gone, who will fill his shoes?

With the NRL reportable spending $500,000 per day to run the game, it was only a matter of time before Todd Greenberg was shown the door.

It must be pointed out that one man never acts alone and all these decisions would have been signed off by his board, the NRL Commission.

A bloated head office with Greenberg on a reputed $1.2m per year, the riches of the broadcasting deals are nowhere to be seen.

While he was a good enough chief executive at the Bulldogs to be given the top job at HQ, the arrival of new NRL Chairman Peter V’landys was to spell the death knell for Greenberg.

Years of inactivity with a river of gold flowing beneath his feat, Greenberg was not able to capitalise on an era of record-breaking broadcasting deals.

Incoming interim CEO Andrew Abdo has the backing of V’landys but is not overly liked by his colleagues. This is immaterial if he can steer the game through this current COVID-19 crisis.

It is unlikely that he will have to negotiate the next broadcast rights deal, but as the NRL Chief Commercial Officer, he has the financial acumen to do so if needed.

V’landys has got his wish earlier than many thought as Greenberg’s contract was to come to and end at seasons close. Many in the game speculated that Greenberg and V’landys had fallen out and he was not to be offered a new deal.

This turned out to be spot on. If Abdo does a good job through the next few months and has the backing of the chairman, then the job should be his.

The game is not in a position to search the world for the next CEO when there is one in the next office. The AFL did this when Andrew Demetrio retired only to give the job to his deputy, Gillon McLachlan.

Rugby league has a long history with public bloodletting in regard to how it disposes of its front office leaders. While David Gallop was not universally liked, he was a stable influence on the game as it came out of the from the Super League war.

What is needed now in these uncertain times is a leadership team that can navigate through this year in the wilderness and look to a bright future. In Peter V’landys they have that helmsman. His first mate needs to be not pulled from the ranks of the Costa Concordia.

While it would be cruel to suggest that Greenberg is the Chrissie Hynde of chief executives, the curse of the great pretenders has struck again. Will Raelene Castle next door at Australian Rugby headquarters be the next Belmore alumni to be booted into touch?

Next Wednesday looms as D-Day for Tyrone May’s Panthers future with the utility set to front the board over a controversial social media post.

The ‘One’ player who could change everything for each NRL side

Like Morpheus, NRL clubs and fans are always searching for the ‘one’. 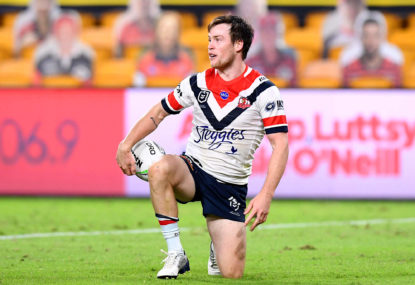 The ‘One’ player who could change everything for each NRL side

The greatest grand finalists of the 1980s

This is the fourth article in a series where I’ll name who I think were the best players to play in a grand final in each decade, focusing this time on the 1980s.

The greatest grand finalists of the 1980s

The NRL doesn’t need a draft. Clubs need to get better at developing talents and managing their salary caps.

I wasn’t going to submit this piece because it’s inherently negative and might elicit a few angry responses.