Another day, another group calling for Raelene Castle’s head – amongst others. Or rather the same group, albeit with a few more voices.

It contains little more than broad generalisations with naught in the way of specificity. Take these two paragraphs:

In recent times, the Australian game has lost its way. It is a defeat inflicted not by COVID-19, or an on-field foe, but rather by poor administration and leadership over a number of years.

Our rural clubs, junior clubs, sub-districts and community clubs have been let down and we firmly believe transformation is needed across the game in this country. There’s no time to waste.

It’s all very well to say bad leadership has been the root cause of rugby’s maladies, but would it have hurt to include, say, how exactly this current administration has contributed to that? Or in what way the community-driven levels of the game have been let down by those in charge right now?

On that latter point, while there’s still something of a disconnect between Rugby AU and what could be termed the game’s grassroots, many – not all, but a fair helping – speak of that relationship improving under Castle’s management.

Without resorting to analysing the letter word-by-word – although it is worth reading in full – suffice to say the sweeping statements continue (“Australian rugby needs new vision”, “Create a much-needed-sustainable, commercial rugby business”, “Our youth deserve to be inspired”).

The crux of the letter, though, is these three paragraphs:

It is with this in mind we ask the current administration to heed our call and stand aside to allow the game to be transformed so we emerge from this pandemic with a renewed sense of unity and purpose.

There is only one question that needs to be answered at club level, at state level and at national level: Is this decision in the best interests of Australian rugby?

Only when we can answer that question openly, honestly and transparently at all levels can we restore Australian rugby to greatness.

One wonders if any of the 11 signatories grasped the irony – some could quite convincingly argue hypocrisy – in calling for renewed unity in the same sentence they asked the current administration to sack themselves and get out of running the game.

If we’re talking about openness, honesty and transparency, then surely we need to discuss the merits of those who this call is coming from.

Nick Farr-Jones, by all accounts the leader of the group. Excellent captain, one of the best three or four halfbacks to have played for the Wallabies. Also a committed Christian who, understandably given his faith, was heavily critical of Rugby AU’s handling of the Israel Folau matter last year.

He also spent some time in rugby administration, serving as chairman of NSW Rugby before he stood down in controversy after authorising a loan to former Wallaby Jim Williams using funds from the Learn Earn Legend program. Farr-Jones was later cleared of misusing federal funds. 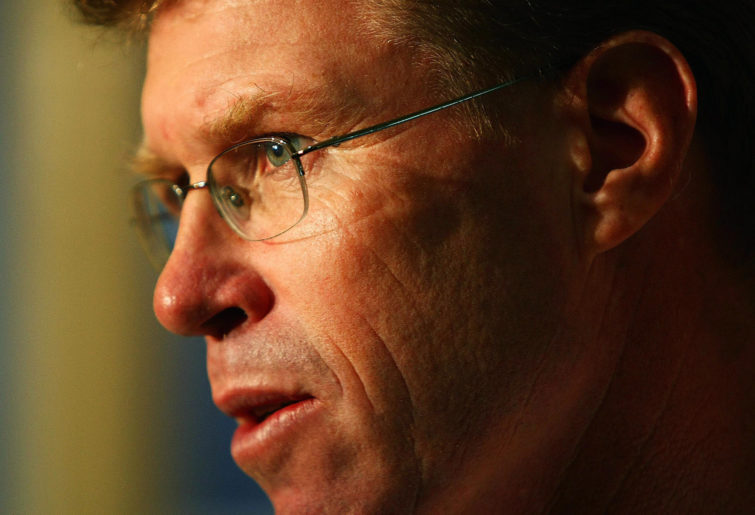 How about Phil Kearns? He was touted by some, including Farr-Jones, as the choice to replace Castle, and indeed lost out in the race for CEO when the latter was hired. He commentates for Fox Sports, the broadcaster which was furious with Castle after she opted to take rugby’s broadcast rights to open market.

Simon Poidevin is banned from providing financial services after withdrawing his request for an Administrative Appeals Tribunal review.

Others have been involved in various rugby boards – George Gregan with the then-ARU starting in 2012, Stirling Mortlock at the Melbourne Rebels from 2013, and Nathan Sharpe joining the QRU board in 2016, for example. Maybe their insights into the administration during their tenures forced the conclusion that they had to act now, although equally the cynical out there may opine they had a crack at rugby admin and contributed to the current malaise.

That isn’t written to tarnish their characters or render the entire group’s opinions instantaneously void. It is merely to point out that their criticisms of Rugby Australia ought to be examined in the proper context, and their proposals evaluated on their merits, not on the name-value the signatories have.

Fantastic players they might have been, but that doesn’t mean they’re best placed to offer administrative solutions.

Indeed, any ‘solution’ which calls for mass resignations needs to be treated with due scepticism, particularly given Castle has been in the top job fewer than three years. That is not sufficient time to turn around all of rugby’s ills, nor is it long enough to see the effects of developments made under her leadership.

Take the point about young rugby players needing to “feel a connection with the Wallaby jersey”. The most sure-fire way for that to happen is the Wallabies start winning a hell of a lot more games. The Castle administration’s predominant developments on that front – hiring Scott Johnson as director of rugby and Dave Rennie as coach – will only bear fruit in the coming years. Change wasn’t viable there due to Michael Cheika’s contract extension signed prior to Castle’s arrival.

If it’s progress and rugby’s best interests these 11 men truly want, one wonders why they’ve called for a new administration rather than working with the current one on the game’s ills and answers.

It’s not often one would advise looking towards football in Australia for sports administration advice, but six members of the greatest-ever Socceroos team combining for an enlightening roundtable on the state of that sport made for a far more constructive public discourse than what Farr-Jones and company served up.

While the appearances of Gregan, George Smith, Mortlock, Michael Lynagh, Poidevin, Stephen Moore, Jason Little, Rod McCall and Sharpe provide more credibility than what the last round of Farr-Jones’ criticism had, the names of the former captains who haven’t signed the letter are equally worth noting.

Included in that group are John Eales, Australia’s other World Cup-winning captain and, like Gregan, a former Rugby AU board member. Tim Horan, like Kearns a commentator with Fox. Throw in Andrew Slack, James Horwill, Rocky Elsom, Will Genia, David Pocock, David Wilson, Mark Ella and Mark Loane and you have a collection of non-signatories as illustrious as the signatories.

Ultimately the 11 former captains are entitled to their opinions on rugby and the way it’s run. But that doesn’t mean they’re speaking nothing but gospel truth.

They say only one question matters: “Is this decision in the best interests of Australian rugby?”.

No one will disagree with that, but it is awfully difficult to argue that a wholesale administration change in the midst of a pandemic which has put all rugby on hold, forced broadcast negotiations to be postponed, and put an awful strain on Rugby AU’s finances is in the game’s best interests.

Note: since this story was published, Michael Lynagh has removed himself from the list of ex-captains calling for the Rugby AU administration to stand down.