In order to be the best, you have to beat the best. If there is any international rugby left to be played in 2020 – and there is considerable doubt about that – the Wallabies will be taking aim at South Africa.

The Springboks’ victory at the 2019 World Cup in Japan was achieved mainly by defence and forward play, and nothing epitomised their attitude better than the last quarter of the final against England.

With the game at 18-12 in the 66th minute, the Bokke scored two tries out of defence to put the result beyond doubt:

Both were scored on the phase immediately after a change of possession – via a kick return in the first example, and a turnover in contact on the second. Neither were creative in the strictest sense – if we mean the ability to construct moves over a number of phases in order to break down a defensive structure. In the final analysis, it doesn’t matter of course.

If the Wallabies suffered from a particular delusion in the Michael Cheika era, it was probably the hypnotic idea that winning rugby has to be creative. That led to a distinct attacking bias in selection, which manifested in the preference for Will Genia over Nic White at 9, Samu Kerevi instead of Tevita Kuridrani at 13, and Kurtley Beale instead of Dane Haylett-Petty in the quarter-final versus England.

Australia lost that match 40-16, which was typical of their results against England in the head-to-heads between Eddie Jones and Cheika in the World Cup cycle between 2016 and 2019. It was Eddie seven, Chekko zip.

Nothing illustrated the Wallabies’ preference for attack at all costs better than their results at home against their two most difficult opponents, Eddie’s England and Steve Hansen’s All Blacks:

Australia won only two of these eight matches while conceding an average of 35.5 points per game in front of their own people. The Wallabies only held their opponents to fewer than 20 points on one solitary occasion in four years.

At the level below Test rugby, the Sharks are built very much in the image of Rassie Erasmus’ World Cup-winning Springboks. They create little in terms of phase or set-piece attack, and the principal sources of their tries are turnover returns and the use of the driving lineout in the opposition red zone.

On their recent Super Rugby tour of Australasia, the Sharks won their two games against Australian opponents – 36-24 against the Rebels in Round 4, and 33-23 over the Reds the following week. Sounds familiar? Yes, it’s that 35 points per game average conceded at home again.

The pebble in the shoe is that both the Rebels and the Reds would probably have emerged victorious if they hadn’t given up five tries between them off soft turnovers.

Just like England in the World Cup final, the Reds were well in touch at 16-21 with only ten minutes of the match remaining, before allowing one try by interception, and a second via turnover which put the result beyond any doubt:

The first score is a simple interception taken all the way back by number 13 Lukhanyo Am, after reading the second pass by his opposite number Hunter Paisami. The second is a turnover run back by the outstanding Sharks number 8 Sikhumbuzo Notshe past four weak tackles (three by Queensland forwards) and finished by speedster Madosh Tambwe. Two scoring sequences containing only one pass – nice work, if you can get it.

The intercept try by Am illustrates one of the Sharks’ primary methods of creating defensive pressure and turnovers. Let’s look at ‘Lucky’ Am’s positioning in more detail as Paisami goes to make the fatal delivery: 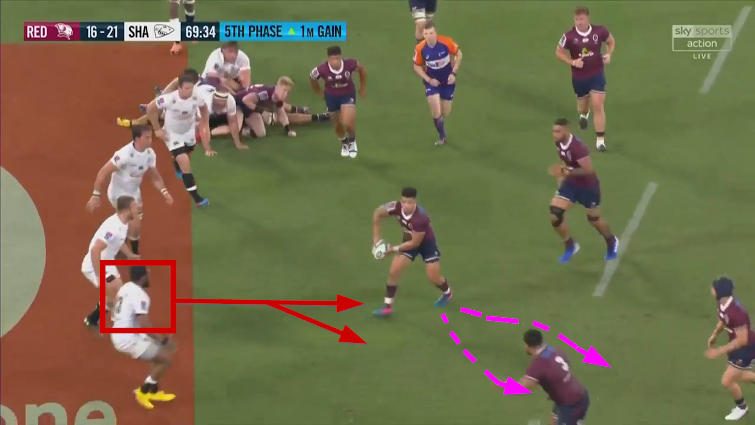 As the pass is made, Am is looking in at the distributor (Paisami) and aligned opposite the next backs receiver (Hamish Stewart in the headgear). Ideally, he wants to penetrate the gap between Paisami and his flat option, number 3 Taniela Tupou. As soon as Am reads the flat pass, he ignores the receiver and breaks on the ball.

The Rebels game contained a protracted example of what happens when the pass goes behind to the backs option (represented by Hamish Stewart) if there is only a mechanical attempt to disguise it:

Twice in the space of 20 seconds, Am’s replacement at outside centre, Jeremy Ward, is able either to break on the second pass and ‘sack’ the receiver behind the advantage line, or force him back inside into the grasp of some very large men indeed. By the end of the second sequence, the Rebels have been driven all the way back to half-way, having started inside the Sharks’ 22-metre zone.

Unsurprisingly, the ball was lost to a turnover penalty a couple of phases later, and a major attacking opportunity went with it.

Not for the first time, at home against South African opponents over the past couple of seasons, the Rebels were largely the architects of their own demise:

As with those second-pass plays, there is a strong sense of the mechanical in the Rebels’ lineout activity, with insufficient attention paid to detail or nuance. First, Ross Haylett-Petty’s decoy jump at the front of the lineout is telegraphed and deceives none of the Sharks defenders.

More importantly, the receiver in the “+1” halfback position, number 7 Richard Hardwick, is already giving away the target area for the throw by standing opposite the intended receiver (Matt Philip) right from the very start. That makes it an easy defensive read for the Sharks lineout: 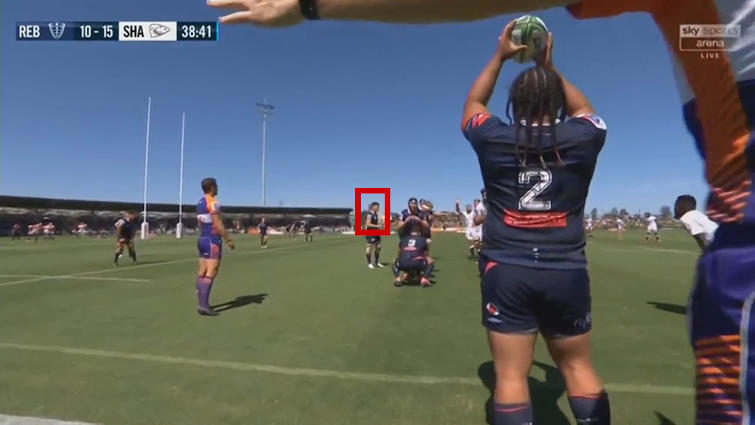 Two other tries in the same game bore a strong resemblance to both the tail-end of the Reds game, and the Springboks’ kick return which finally put away England in Yokohama:

In the first example, the box kick by Ryan Louwrens is too long for the main outside chaser, number 14 Andrew Kellaway: 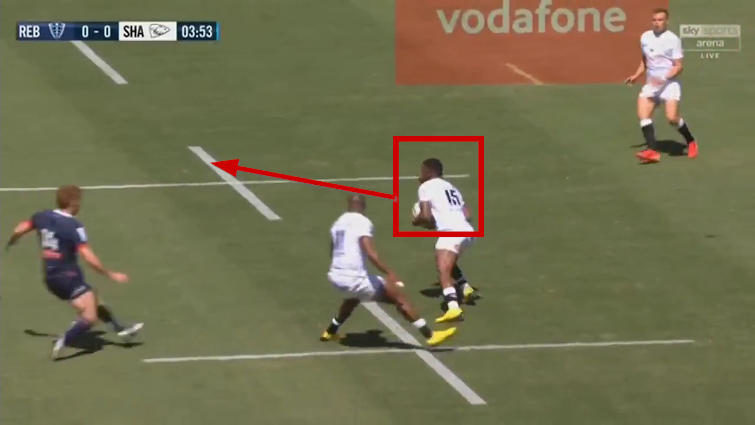 With Kellaway out of the equation, Sharks fullback Aphelele Fassi is free to look inside at three of the Rebels forwards – Haylett-Petty, Hardwick and loosehead prop Matt Gibbon. As with the Reds forwards against Notshe the week before, the kick or turnover chase does not cast the tackling ability of Australian forwards in its kindest light.

On the following play, the South African instinct is always to look back to the short-side, with Fassi recycling himself in time to put an excellent short kick in behind for Notshe and Makazole Mapimpi to finish fluently out on the left.

The sequence in the second example in the 72nd minute is more straightforward. Andre Esterhuizen rips the ball away deep in the Sharks 22, and two passes later Mapimpi is in under the posts. Five tries in the two games against the Reds and Rebels only cost the Sharks six total passes, eight total phases and one short kick.

Summary
South Africa pointed the way at the World Cup. There was nothing fancy or innovative about what they did, but it worked and it brought home ‘Bill’ to Johannesburg airport.

If he arrives as planned, Dave Rennie’s first task as the new head coach of the Wallabies will be to dispel the more romantic attacking notions of the Cheika era and ensure that his Australia is a tighter, meaner unit altogether – much less generous to the opposition.

That means more balanced selection in all positions, with the heavy weighting towards attacking potential subtracted. It means finding forwards who can chase and tackle effectively – and get up off the deck to do it again and again. It means finding more subtle devices to beat the rush defence if you want to take on the likes of Lukhanyo Am.

Above all, it means not giving up the ball up in either red zone quite so readily and handing the opponent cheap points which they don’t really have to work for. If Dave Rennie can pull that rabbit out of the hat, he may even have a shot at turning Eddie’s England over – now that really is a thought to savour.