The 11 former Wallabies captains calling for the Rugby Australia administration to resign have lost a member, with Michael Lynagh withdrawing his support.

Lynagh, who played much of his international career alongside the group’s leader, Nick Farr-Jones, pulled out of the movement on Wednesday.

“This is not the way I do things and I have withdrawn from the whole thing,” Lynagh said to the Australian.

“It doesn’t mean that I don’t support the change but I had quite a few questions about what they were proposing. [Rugby Australia] now have a new chairman and three new board members. They have got to be allowed to implement change.” 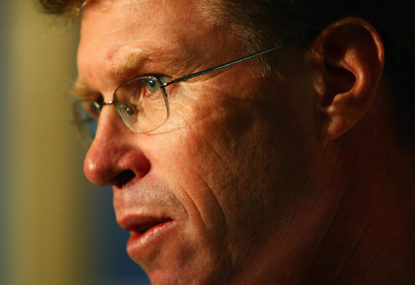 Meanwhile, John Eales, one of the former captains who declined to sign the letter, came out in support of Rugby Australia, telling the Sydney Morning Herald “We all recognise that rugby is going through a very difficult period”.

“I did not sign the letter because I felt it better to act on concerns directly, as a group, with the chairman, as he is already enacting considerable change,” Eales continued.

“What I know is that there are good people across all levels of rugby working hard to solve complex problems. Paul McLean is at the front of making that change and renewal. Everyone wants what’s best for Australian rugby.”

Fifteen-time Wallabies captain and former Rugby AU president Tony Shaw, who wasn’t offered a chance to sign, was more forthright in his appraisal of the letter.

“I’m gobsmacked,” he told the Herald.

“Why put it in the public domain when you have a chairman, who was a captain, just like you, who’s done every job in rugby known to man – from player, captain, coach, administrator and president – and worked his butt off to work through the pandemic fallout in a short time frame.

“I’m surprised they didn’t take the option to pick up the phone and set up a meeting behind closed doors. When Paul McLean steps down as interim chairman, which is happening soon, there will have been a 50 per cent turnover on the board, they’ve got new blood, including world-class businesspeople, and the front door is always open.

Mark Loane, who also wasn’t approached to sign the letter, has also spoken out in support of McLean.