It has now been more than a month since we were last treated to the sizzling spectacle of Super Rugby.

It could be a while before we see this great competition once again, if we do at all. Time will tell on that.

Its future may be uncertain, but with 24-plus years of Super Rugby etched into the history books there is plenty to reminisce about.

We need to wind the clock back a couple of decades to remember Canberra cult hero Ipolito Fenukitau. The abrasive loose forward was an ACT Brumbies original, having worn the number six jersey for their first ever Super 12 game back in 1996.

Fenukitau played five seasons with the Brumbies. They were Australia’s most successful team during that span, making the final in both 1997 and 2000.

It had been an interesting rugby and life journey for Fenukitau prior to joining the Brumbies. Born and raised in Tonga, he first came to Australia in 1993 as a member of the touring Tongan national team.

In one of their lead-up games before playing the Wallabies, the island nation side travelled to Canberra to take on the ACT. It was in that contest that local club, the Queanbeyan Whites, became captivated by Tonga’s 20-year-old flanker.

Fenukitau would make a second flight to Australia later that year, and this time he would be staying for good. The Whites got their man.

“I thought to myself that’d be a great start for me – a great opportunity to move from Tonga to another country and carry on with my career,” he says.

Little did Fenukitau know just how great. Rugby turned professional a couple of years after he touched down in his new country, and the ACT was awarded Australia’s third Super 12 franchise.

The best players in the ACT – including Fenukitau – were combined with some discards from NSW and Queensland to form the inaugural Brumbies team.

Many years later, Fenukitau still vividly recalls the build up to the first season of Super 12 rugby.

“It’s been over 24 years but I think that I remember every moment that I shared with my teammates training up in the Snowy Mountains during the pre-season,” he says.

“It was an amazing time that we enjoyed together. It’s a great memory to be a part of the beginning of the Brumbies and be one of the original 22 boys.” 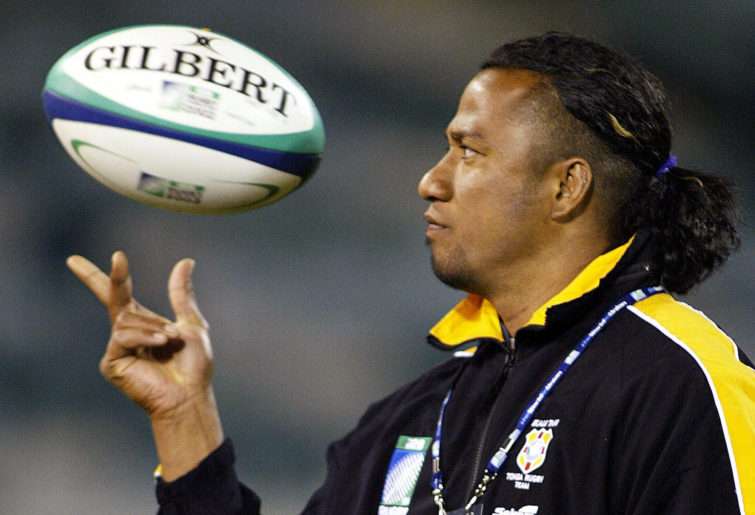 Things would only get better. The Brumbies won their opening Super 12 match against Transvaal 13-9 at Canberra Stadium.

It was a massive upset, and it left the brash visitors stunned. Next week, the Brumbies toppled the Wellington Hurricanes with Fenukitau bagging his first Super 12 five-pointer. Two wins from two, thank you.

You bet they did. Fenukitau was prominent again, scoring a double for his team as they dispatched their much-fancied opposition 40-34.

It wasn’t just his tries that were impressive. Fenukitau was throwing his body whole-heartedly into everything that he did on the field. The fearless flanker exemplified the sort of commitment being espoused by the start-up team.

“We played with a lot of heart and mongrel back then. The game was something that we wanted to go out and grab,” he says.

This spirited, smart and sassy Brumbies team ended up winning seven of their 11 matches in ‘96. It was good enough for fifth on the table, just a single point outside the semi-final places.

The following year, ACT not only cracked the semis they made it all the way to the final. Unfortunately, they got pipped by the Blues in Auckland. Fenukitau was used as a substitute in that 23-7 defeat.

Three years later, the Brumbies made it to their second big dance. This one was played at home and Fenukitau got the start at number seven. The result was the same, though, with Canterbury trumping the favoured Brumbies, 20-19.

Fenukitau regards playing in these two deciders as the highlights of his days wearing the blue, white and gold jersey.

“The grand finals were both very special moments,” he says. “It’s something that you wait for and train so hard for. It’s something I’m very proud of.”

Fenukitau made an indelible mark in his handful of years with the team, and was a true Brumbies fan favourite. He was a warrior on the field and had a knack for scoring big tries.

In addition to that brace against the Blues, Fenukitau also touched down in a huge 21-20 home win against table-toppers Queensland that season. A year later he scored a hat trick in a famous 49-29 home victory over Canterbury.

In those early days, there was tough competition for spots in the Brumbies back row. Fenukitau, Brett Robinson, Owen Finnegan and Troy Coker were among the loosies vying for starting jerseys.

“None of us would be happy on the bench, but we did everything as a group and we agreed on things,” says Fenukitau. “We accepted our role and played for each other. We didn’t put our head down.”

Fenukitau had some truly memorable performances coming off the Brumbies’ bench. In that ’97 rout of the Crusaders, his trifecta of tries came after being subbed on with just 25 minutes of the game remaining.

Cameos like these led to Fenukitau becoming known to Brumbies supporters as the super sub. He remembers with delight the fans chanting his sobriquet whenever he was injected into the fray.

Another special feature of Fenukitau was his Pacific Island background. In the inaugural Brumbies team, just two of the starters were of Pasifika heritage.

“I’m very proud to be one of the first Islander players to play Super Rugby in Australia,” says Fenukitau.

“Back in our first game in 1996, it was myself and (Elisi) Vunipola who were the only two Islanders to start for the Brumbies.

“In Sydney, there was Daniel Manu, Willie Ofahengaue and Fili Finau playing for the Waratahs. I think only (Toutai) Kefu was playing for the Reds. There was only a small amount back then. Today the numbers are growing.”

They sure are. In fact, the Brumbies team that defeated the Reds in their opening Super Rugby game in 2020 had nine starters of Pasifika origin.

The heartbreaking defeat in the 2000 final was Fenukitau’s last Super Rugby game for his beloved Brumbies. After 55 appearances over a handful of seasons, he opted to leave Canberra and continue his professional career abroad.

“I had an option to stay, as well as an overseas option,” he says.

“The young players were coming through like George Smith and Radike Samo. Peter Ryan and Jim Williams were also pushing for selection then in the back row.

Fenukitau played eight seasons of club rugby in Japan with three different teams. He then returned to the ACT in 2008 to toil two more years semi-professionally before finally hanging up his boots.

Now aged 47, Fenukitau works these days in security at a hospital about a mile from his old stomping ground, Canberra Stadium – the place where the shouts of ‘super sub’ still echoes through time.