Rugby league fans aren’t stupid. No matter how much anyone tries to tell you we will be returning to the NRL on May 28, it just may not happen.

And while there is still time up the proverbial sleeve to get a competition played this year, the coronavirus pandemic is unpredictable at best and being locked down gives a man a lot of time to think.

The first weekend in September is apparently the latest a mightily shortened competition could kick-off, but that would see the grand final in mid-December and frankly, it’ll be a struggle to get around a competition as disjointed as that would look.

So, if we do miss May 28 and go for much longer without footy, I’d be proposing to forget about club rugby league for the remainder of 2020.

Instead, let’s form eight representative teams and play a seven-week competition, followed by a two-week finals series. That could realistically start as late as October.

This proposal, if you could call it that, sees New South Wales and Queensland split up into City and Country, New Zealand split up into Auckland and the remainder, and the other two teams made up by the affiliated states and expats (i.e. The English Raiders), plus the Pacific Islands.

The only rule regarding player eligibility is that you must be born there. No exceptions.*

It makes for some fascinating teams and combinations, which could have NRL fans excited with the novelty of it all, as well as live sport for two months before allowing clubs to build into hopefully a full 2021 season.

*I was forced to make one exception. Jordan Pereira was born in New Zealand, but played footy in Western Australia. The affiliated squads roster was a player short, so voila. It’s the same deal with David Kidwell and Kristian Woolf coaching the rest of New Zealand and Pacific Islands respectively.

Coaches were picked based on ladder position at the end of the 2019 season, while the distinction between city and country in New South Wales and Queensland is based on Sydney in New South Wales, and the combination of Brisbane, the Gold Coast, Sunshine Coast, Townsville and Cairns in Queensland.

Now, I won’t lie. This is fanciful thinking and a bit of fun. But if we get to October, it really should be seen as an option by the NRL to get something on TV this year.

There are two potential issues: only roughly half the competition gets to play any footy through this method, and the fact of the matter is some of the teams are likely to get beaten up pretty badly.

But it’s half of the competition getting to play, which is half more than we may otherwise get if the pandemic situation doesn’t improve. 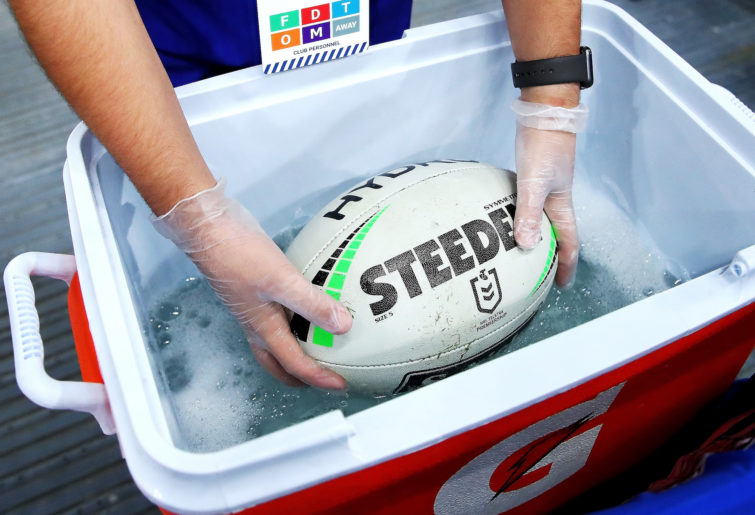 Some fans, as they do with the NRL’s representative weekend, are likely to turn their noses up at such a concept. However, after months with no footy, the novelty value of this to close out 2020 could be great fun.

It’s that novelty value, as well as the lure of live sport, which makes a proposal like this work. Before the Big Bash League got carried away with ridiculously long seasons, we all saw just how well that worked on TV.

Rule changes could be trialled, teams could use their entire squads and games could be played in different parts of the country, should travel restrictions allow it, and most fans would likely get around something like this. And it all neatly fits into a two-month window to keep the sport relevant ahead of a monster 2021 season when club rugby league returns.

Again, most of this is a worst-case scenario where holding an NRL competition is unfeasible, which it could well be.

Auckland taking on the rest of New Zealand and Country New South Wales versus Country Queensland pose as matches that could get blood boiling, with fans on the edge of their seats and players passionate.

It’s also a chance for fans to see combinations they otherwise would have no chance of seeing. The West Australian-born Kalyn Ponga working with English hooker Josh Hodgson for example, or the Auckland-born front row of Josh Papalii and Martin Taupau going up against Payne Haas and David Klemmer in the New South Wales City outfit.

When it comes to relative strength of the sides, it’s Auckland who must mark themselves as the most talented rugby league city in the world.

That team, led by Jason Taumalolo, would contend for an NRL premiership without a doubt. And when you have Jesse Bromwich, Sio Siua Taukeiaho, Joe Ofahengaue and Isaiah Papali’i coming off the bench with Moses Leota and Alex Glenn not even getting a run, it speaks volumes.

All four city and country sides would hold their own. The Queensland Country team looks to have a particularly strong spine, while New South Wales City get James Tedesco and Damien Cook to run the show.

The states and expats would give a good account of themselves thanks to a predominantly English forward pack, topped up with Paul Vaughan from the ACT and Liam Knight from Alice Springs, while the rest of New Zealand side is also outrageously talented in some areas, particularly up front.

Unfortunately, it’s little surprise to see the Pacific Islands side flush for outside backs but struggling up front, the side completed with Papua New Guineans and Fijians who play locally.

As I mentioned in the piece, this is a bit of fun. It’s highly unlikely to happen, but I had a blast putting the teams together and letting the mind run wild.

And to put it on the record, in this neat little fantasy world, Auckland beat New South Wales City in the final.

If this was to happen, Roarers, who wins it and why?