1. North Melbourne Kangaroos: Five wins, one loss at 227.2 per cent
They were premiership favourites even before the first bounce and this season they showed us why, only losing one game by two points, which was in the opening round against Melbourne.

North Melbourne were a team everyone feared and their ability to move the ball around the ground and apply pressure around the ball was exceptional. But they saved their best game until last.

North Melbourne’s semi-final win over Collingwood was a heart-stopper where they ended up winning by two points. Their composure and pressure late in the fourth term showed how good this side is. After being down at halftime, they came back late and held on.

Their midfield performance was the best in the completion. Their depth is what made them impossible to match. Just when clubs thought they had the midfield battle on their terms, an outside player would rotate in and throw the balance back the Kangaroos’ way.

The Kangaroos need to be able to continue to fight when the game is on the line. But their ruck structure is one they need to get right as they had various different players rotate into the position. Finding that number one ruck will help them control more of the game from the first touch.

They were a team that definitely could’ve challenged for the premiership this season and one that potentially could’ve taken it out, so they’ll be one to watch next season.

2. GWS Giants: Four wins, two losses at 123.2 per cent
The Giants were able to double their winning streak this year from last year, making their first appearance at the final series and ending their season with a loss to Melbourne in the semi-final.

Their best win was in the opening round, holding on to win by one point in very poor and wet conditions against Gold Coast. Although they didn’t score a goal until the second half, their pressure around the ball and defence in those poor conditions showed how tough they are. They slogged it out for four quarters and in the final term just about held off all of the Gold Coast attack.

Their forward line was a work in progress but once they got the correct formation they were able to hit up targets and put scoreboard pressure on.

However, their accuracy in front of goal is something that needs to improve. They were very inconsistent and inaccurate when kicking in front of goal. They are exceptional at kicking on the run, it’s those set shots that they need to work on in training. They had the third-worst accuracy in their forward 50 in the competition.

They’re a side continually improving each and every season and one day they could grow into a great team. If they can stay together and not have too many list changes and fine-tune their skills, they could push for the premiership.

3. Brisbane Lions: Three wins, one draw and two losses at 107.0 per cent
After four seasons no one should ever write the Brisbane Lions off. They made the grand final twice in the first two seasons of the AFLW and they had a poor 2019 season with many expecting the Lions to be at the bottom again this year.

They were able to turn the tables around this season with some better performances than last year, but were nowhere near their best. Getting an away win is always great but getting a come-from-behind away win is the cherry on top.

The win in question is when Brisbane beat Geelong down at GMHBA stadium. The Lions were two goals down at halftime but in the third term they went to work, keeping Geelong scoreless in the third to their three goals and then another two goals in the fourth to the Cats’ one point.

It was a shift in momentum, the Cats went missing and struggled to find answers as the Lions just ran away with the game with Jesse Wardlaw ending the game with three goals next to her name, almost beating Geelong all on her own.

Brisbane struggled with list turnover over the break. With Gold Coast coming into the league and their key defenders leaving they struggled to find like-for-like players to feel those key positions. However, their leaders stepped up and really helped guide their young side through the season.

They were inconsistent at times but with so many list changes that’s going to happen when a new side comes together. With more games together as a whole group the stronger they will get.

Over the offseason, their forward unit needs to focus on their goalkicking as well trying to hit up a target when coming into the forward line. Getting back to basics is key.

4. Gold Coast Suns: Two wins, one draw, three losses at 101.3 per cent
A team predicted to go nowhere. Well that definitely wasn’t the case. They were able to make an impact in their first season in the AFLW by qualifying for the finals series, but sadly lost in the semi-final to Fremantle before the season was cut short due to the coronavirus crisis.

Their best win out of the two came against the Tigers in Round 2 winning by 11 points over another new team in the competition. At quarter time the teams were level at two goals apiece. The battle was won in the second and third where Gold Coast was able to score another three goals to Richmond’s three points.

Being able to hold on and keep finding a way forward when the game was in the balance was the reason they were able to come away with the win, along with Richmond’s inaccurate kicking in front of goal, with the Tigers kicking two goals and ten behinds to Gold Coast’s five goals three behinds.

Jamie Stanton was a standout in that game. Even though she wasn’t able to finish due to a shoulder injury, she was still able to make an impact and score a goal as well.

Being a new team in the competition, the young talent that they picked in the draft was good but sadly inconsistent. They have serious potential and if they can continue to grow and develop and give those girls more game time as a unit they will get better. 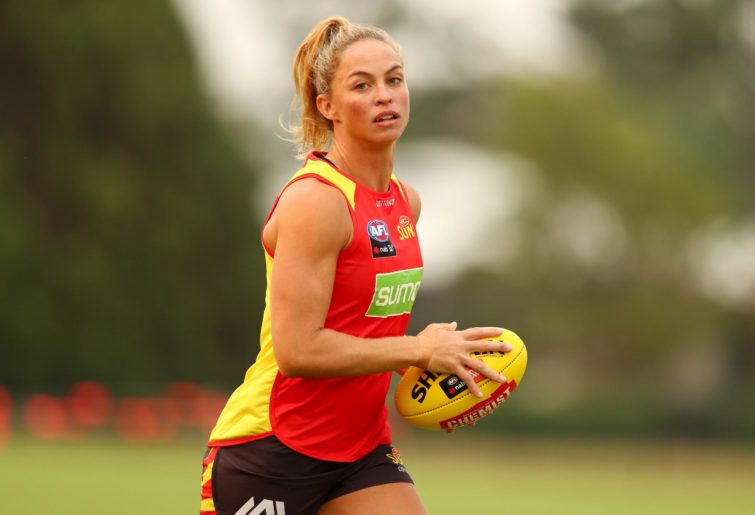 The inconsistency shows areas to improve. Their midfield showed they had the ability to match with the best, but just struggled to control the ball when they had it. Gold Coast was second-last in clearances so that is an area in the offseason to build on with star ruck Lauren Bella.

Their two wins came against two new teams who were in the same position as them, but they lost to the teams who had more experience in the competition at the AFLW level. With another year of improving and bouncing back from this season, the Suns can look to contest teams who have been around since the beginning and potentially beat them.

They came close to Brisbane who did make the grand final twice in three years, but sadly couldn’t win it.