For the duration of the social distancing measures, the Greater Western Sydney player moved back to the family farm, located on the outskirts of Holbrook near the New South Wales southern border.

It’s meant that while many of us are trying to learn a new skill, juggle family commitments or master new technologies, for Parker it’s back to business as usual.

“Anyone who knows what it’s like to live on a farm knows that it can already be quite isolating, so my situation isn’t too different to what it would normally be,” says Parker.

Parker’s family are sheep farmers, so this has certainly kept her busy over the last couple of weeks. In fact, when I speak to Parker she is standing in the middle of a paddock ready to do some fence repair.

“A couple of days ago we finished cropping, so we’ve been busy trying to get the crops in,” she says.

“It involves many hours of tractor driving, which I have done during the last couple of weeks. I love it, I could probably do it all year round.

“Hopefully we get some rain this week and we can get some feed to put the sheep out.”

It’s also hard to be lonely when you have 5000 sheep, some alpacas, dogs, cats, chooks and ducks. 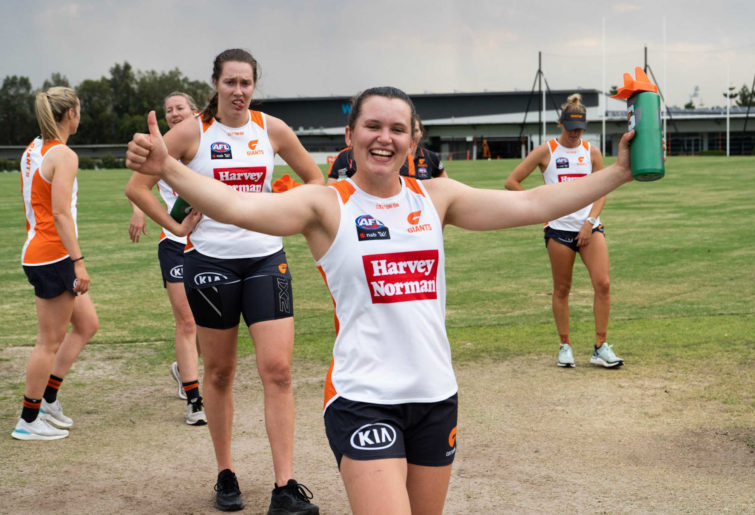 Just over a month ago, Parker and her Giants teammates were playing what would be their final match of the season.

Following the outbreak of the pandemic, the AFL moved quickly to change the structure of the 2020 season. The plan was for the finals to progress over three weeks, with the Giants featuring in their first finals in the history of the competition.

Unfortunately, GWS lost their first game to Melbourne by three points and then the following week, the season was postponed due to new restrictions which made travelling over state borders near impossible.

Despite the disappointment of bowing out in week one, 2020 will be a season Parker remembers with fondness – not only because she played in her first finals, but also because this week, Parker was named in the AFLW All Australian team.

Parker was the only Giants player named in an exceptional squad – including some of the biggest stars in the game like Maddy Prespakis, Karen Paxman, Isabel Huntington and Libby Birch – and was shocked at her inclusion.

“It wasn’t something I expected and I never would have thought was possible at the start of the season,” says Parker.

“I knew I had a lot of developing to do and I’m still one of the youngest in the team. I feel like there is a long way to go, but to be recognised alongside some of those names is a huge honour, especially since it includes so many players I look up to, not just now but since even before I was drafted into the AFLW.”

The 19-year-old had an incredible season in the midfield, with a disposal efficiency of 61 per cent and an average of 21 disposals per game.

Modesty comes easily to Parker, who credits the many people around her who have provided her with support including her family, coaches and teammates.

Leading into the season, connection was something GWS focused on, given half the squad comes from interstate.

“That connection was a big focus during pre-season. It is something we talk about a lot – the culture piece. When you have a good culture at a club, like we have at the Giants, it allows you to play good footy,” says Parker.

“When you gave good trust and care for your teammates, that’s when you play a good brand of football, just like we did this year.

“I have never been part of a team or a family of people that support each other so much and thrive on each other’s success. It is amazing to be part of.”

While some might consider the transient nature of the squad a weakness, for Parker it is one of the reasons the group is so strong.

“The fact that a lot of us move away from home can make it a challenge, but when you are all in it together it makes it much easier to support each other,” she says.

“The fact we come from many places, brings us all closer together.”

The downside of this closeness is that Parker is missing her teammates, particularly ‘Kids Club’, which is made up of players under the age of 23.

“When I was drafted as the youngest player in the squad, I missed having people my own age that I could just be a kid with,” says Parker.

“My good friend Tait Mackrill and I knew there would be some younger potential draft picks, so we came up with the idea to bring the group together.

“It was a place for those young girls to feel comfortable and to find their way into the team and the club.”

For the moment, Kids Club operates over Zoom, but in good time Parker will be back and ready to make another finals series in 2021.

And while Parker has a few more years in the Kids Club she helped establish, with initiative and care for her teammates like that, she will be a future leader at whatever club she plays for.