Apart from a 37-year drought between 1980 and 2017, the club has generally been successful and can rightly claim to be at the top of the tree with two premierships in the last three years.

That is why it is remarkable that the current list at the club includes eight players who are members of the Tigers’ top 100 all-time game-players list and this is after the premature loss of two other members, Alex Rance and Brandon Ellis, since the end of the 2019 season.

This highlights the fact that Richmond is a talented and settled team that has developed players over a long period of time and these players have maintained form and fitness for long enough to now be among the club’s elite.

I first became aware of the development of the Tigers’ dynasty in Round 21, 2016 when Ty Vickery played his 119th (and last) game for Richmond. Vickery moved on to an ill-fated season with Hawthorn but that 119th game at the Tigers had been enough to unseat five credentialled players who were sharing the hot seat at the club in 100th position in the Tigers’ top 100 game-players list.

Between them, these five players had won three premierships, three best-and-fairest awards, two leading goal-kickers, captained a premiership, finished second in a Brownlow Medal, won a Norm Smith Medal and an All Australian and coached the club for three years but were no longer members of the game-playing elite.

The next year Vickery lost his top 100 spot to Brandon Ellis and slipped further down the list, being overtaken by Dylan Grimes, Nick Vlastuin and David Astbury.

The three top game-players at the club, however, are undisputable as they are the only three to play 300 games in the yellow and black. 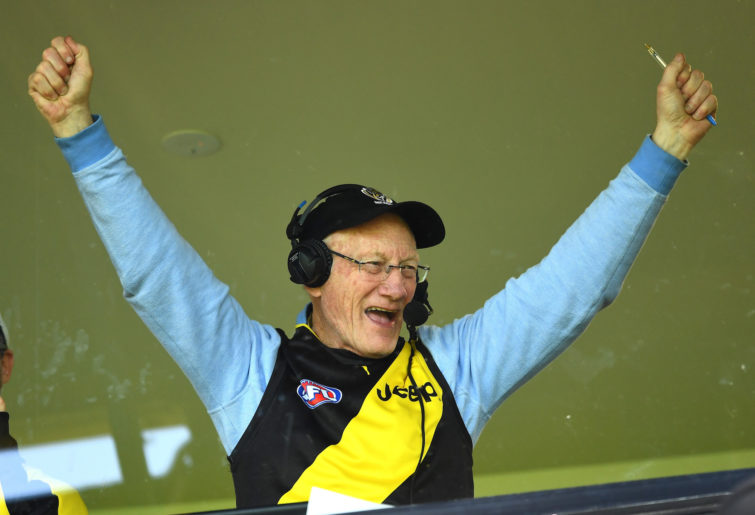 Kevin Bartlett not only played 300 games, but passed the 400-game mark, finishing on 403. One of only four players to reach that mark, he remains the third greatest game-player in the AFL despite finishing his career 37 years ago. His trophy cabinet is impressive with five premierships, five best-and-fairest awards and a Norm Smith Medal. Called ‘Hungry’ because of his refusal to handball, particularly around the goals, he won four leading goal-kicker awards at Richmond and notched up an impressive 778 goals over his 19 years at the club.

Number two on the list is Jack ‘Captain Blood’ Dyer, who also notched up 19 years at the club. Dyer chalked up an amazing six best-and-fairests including four in a row between 1937 and 1940. Even more impressively, he had won his first five years earlier and won his last six years after his four-peat, meaning there was a 15-year period between his first and last medals.

Like Bartlett, Dyer also won the leading goal-kicker award twice, played in premierships twice, including one time as captain-coach, and captain-coached the club for nine years before another three years as non-playing coach. Afterwards he became a much loved commentator on the game.

Francis Bourke, number three on the list, started his career two years after Kevin Bartlett and finished two years before. In common with both Bartlett and Dyer, Bourke played in premierships (five), won the best-and-fairest (once), captained the club (two years) and coached the club (two years). Bourke finished his career on exactly 300 games in 1981.