Not surprisingly, these three clubs finished in the bottom three positions on the ladder for their first next three seasons.

It wasn’t until Footscray broke the mould and rose as high as seventh in 1928 that any of them broke from the bottom of the pile, but it was still to be a decade before any of them made the finals. It was again Footscray that made it first, in 1938, and qualified intermittently thereafter, in 1942, 1944, 1946 and 1948.

North Melbourne broke through to finish on top of the ladder in 1949 and eventually became the first of the three clubs to play in a grand final in 1950.

The third member of the trio, Hawthorn took until 1957 to break the finals ice but in 1961 became the second of the three clubs (after Footscray in 1954) to raise the premiership cup. Since that time the Hawks have been the most successful club in the VFL/AFL, with 13 premierships.

With only two premierships in their history, it’s not too surprising that the first three players in the Bulldogs top 100 game players of all time never played in a premiership. What is surprising is that we need to scroll down the list to No. 8, Matthew Boyd, to find one who did. Admittedly No. 6 on the list, Robert Murphy, missed the 2016 grand final win only because of injury.

First on the list of Bulldogs top 100 game players is smiling assassin Brad Johnson, who played 364 games. He also scored 558 goals to be second on the Bulldogs top 100 goal scorers list. A much loved and respected footballer by both Bulldogs fans and the general football public, Johnson had an almost perpetual smile on his face and outstanding ability that enabled him to successfully play full-forward despite not being the size of most successful forwards.

Though he failed to play in a grand final despite a number of close preliminary final losses, he won three best and fairest medals, was the leading goal kicker five times and an All Australian six times, including captain in 2006. Johnson also captained the club for four years. 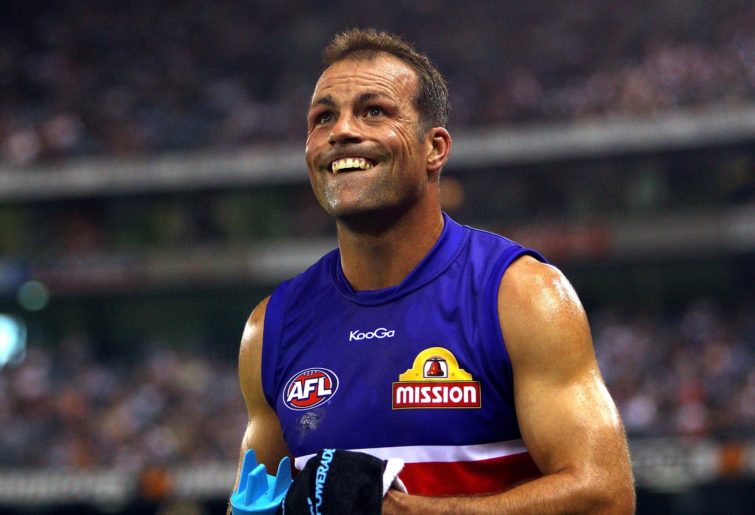 The player Johnson took over the record from, Daylesford boy Chris Grant, is often the topic of conversation when football fans of any club loyalty gather, firstly because of his extremely low pick in the 1988 national draft. Chosen at No. 105, Grant was the only player to play more than 300 games and kick more than 500 goals from that year’s draft.

Secondly, he is remembered as the player who because of a one-week suspension was ineligible for the 1997 Brownlow despite polling the most votes.

In his first year of AFL football Grant kicked 51 goals as a 17-year-old, the youngest player in AFL history to do so, and won the Bulldogs goal kicking award. Like Brad Johnson, he played under both the Footscray and Western Bulldogs monikers and captained the team. He won two best and fairest awards and made the All Australian team on three occasions.

No. 3 on the Bulldog’s list, Doug Hawkins, was still at the club in 1990 when Chris Grant played his first game. In 1994 when Brad Johnson played his first match Hawkins played his last for the still named Footscray Football Club.

Hawkins played one more year at Fitzroy to bring up his 350th and last game. While at the Bulldogs Hawkins won the best and fairest in 1985, leading goal kicker in 1991 and captained the team for four years.

No team has been more bitterly disappointing across the first two rounds of this AFL season than the Western Bulldogs.