Why fan-led blogs are the future of sport media

The current lockdown has given us all the opportunity to consume more media than we otherwise would have had the inclination to do.

While no live sport is being broadcast, replays of vintage games with the overlay of modern commentary and perspective have become staples of pay television. I am, however, enjoying the sit-down conversations with the unused talent that eats up hours of the television schedule on pay TV at least.

What has also grown in consumption is appetite for opinions from mainstream fans. The average fan has never had their opinion aired on either free-to-air or pay television platforms and the current situation has not changed that status quo. With the time we now have on our hands with no live sport to watch, people’s opinions have come to the forefront, if not in the mainstream media, then on fan-based blogs.

You are reading this on The Roar, which is the leader of the pack in the Australian landscape. This has given thousands of supporters the opportunity in a 24/7 environment to air their opinions on any sport subject they choose and get feedback from the readers who consume the content. I joined in 2008 but didn’t get involved until this year. The longevity of the site means that it is working and growing as fans want their voice heard.

But The Roar does not stand as a beacon on a deserted hill. Every sport and almost every team has their own fan-led blogs and forums the average punter can add their two bob’s worth. Fan sites and independent sport media allow the reader to become a contributor. It lets fans interact with other fans and debate anything they wish to with humorous banter or serious commentary.

One of the best known is a YouTube channel called Arsenal Fan TV. This relies 100 per cent on interaction with fans immediately after a match has finished. It’s grown from a one-person operation into a fully-fledged business that has branched out into a website, podcast and merchandise. While this may be at the top end of the scale of fan blog success, many if not most don’t seek to turn a quid. In fact due to the scale of blogs out there it would be impossible to do so. They are done purely for the enjoyment and consumption of the fans.

A football site like Empire of the Kop has a wider appeal than NRL-based forum The Chookpen would have. But that’s not the point. The appeal isn’t how many likes or reads they get but the chance to vent your frustration at the team management or the poor (in your eyes) decisions the coach has made. Fan-led media gives you that opportunity that the mainstream media never has and probably never will.

In the UK they used to have fanzines, publications produced and printed by enthusiasts of a sport, club or band. Internet self-publishing meant the end for the printed fanzine, but it also led to the growth of the internet fanzine, or blogs, that we have today.

England was fertile ground for the printed zine and many of the football ones had a life of their own and outsold the official matchday program. Ther season for their success was the unfiltered opinions, with writers saying what many of the fans were thinking. Total Rugby League in the UK has a foot in both camps, with printed editions as well as a large online presence.

The fan blog would seem to suit the minority sports in a large market as they’re often the only, or one of a very few, ways supporters can interact with others of their mindset to get their opinions out there.

We are now a society almost fully dependent on the internet for our news and entertainment. The fan-led media that has been growing as a part of our daily media consumption will only get bigger given it’s mostly a free entree to the news when so many others have set up paywalls. 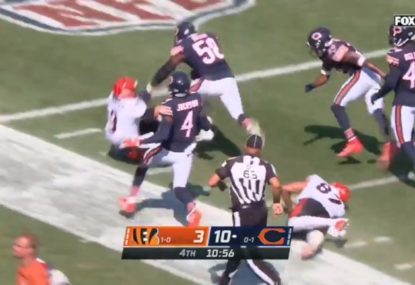