When we were kings: Is there still room for rugby’s Quade Coopers?

It is an age-old question argued over by rugby followers across the world, sitting in front of their pints of ale and pounding their fists on oak tables, as the flames of an open hearth lick the pub walls behind them: who do we want running our game from the pivotal number 10 position? The idealist or the pragmatist? The magician or the navigator? The cavalier or the roundhead?

Although the argument goes on, it has lost some of its vivid colours in the professional era. The great debates between Mark Ella and Michael Lynagh in Australia, Stuart Barnes and Rob Andrew in England, and Carlos Spencer and Andrew Mehrtens in New Zealand have lost some of their bloom as the selection battle has been resolved relentlessly in favour of the pragmatist.

In recent times, Danny Cipriani has found himself out in the wilderness in favour of either Owen Farrell or George Ford with England, and even in the home where all rugby romantics go to die – Wales – the roundhead has been firmly in the ascendant via the choice of Dan Biggar.

Only in Scotland does the cavalier survive, although even here he (in the shape of Finn Russell) has been cast out by the coach who nurtured his professional development, Glasgow’s Gregor Townsend. 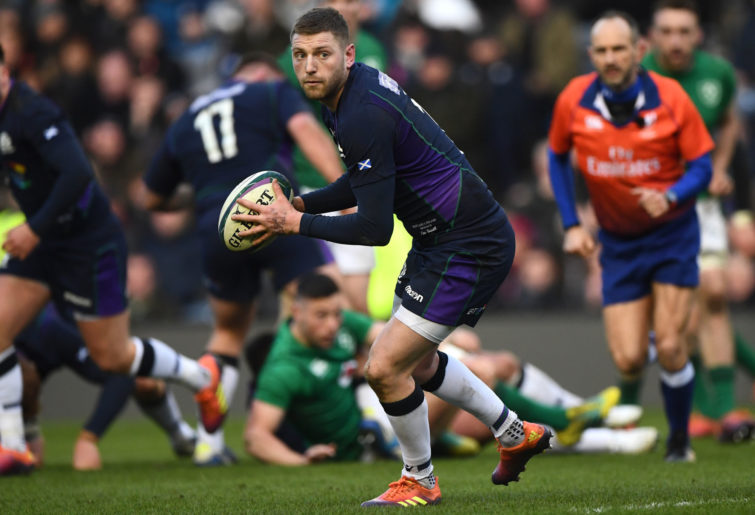 In Australia, the same great battle has been fought out for many years between Bernard Foley and Quade Cooper, at least up until the 2019 World Cup. As Cooper’s star faded in the Michael Cheika era, so Foley eventually matched Quade’s total of 70 national caps, and it took him three fewer seasons in gold to do it.

Coaches love consistency, and they love to know exactly what they can expect from each one of their players. That is how they predict outcomes, and adding x-factor to the mix can be a volatile experiment. X-factor players tend to sharpen the ups and downs on the risk-reward seesaw, and that does not do many coaching careers – or nervous dispositions – a lot of good in the long run.

Even the stand-off half with perhaps the most extravagant natural gifts of all – Mark Ella – provoked controversy during his four years and 25 caps as a Wallaby between 1980 and 1984.

Ella started at number 10 for the Wallabies in their first Bledisloe Cup series win for 31 years in 1980, but he was also picked in the series defeats against the All Blacks in 1982 and 1984. By 1986 the realist Michael Lynagh was at the helm, as the Wallabies won the cup back again.

Mark Ella’s unusual, remarkable array of talents can be viewed on this highlight reel:

With Ella standing no more than five to seven metres from his halfback and frequently passing short outside, the Australian backline attacks of the early ’80s were both straight and condensed. First phase rarely moved much beyond the far post before either the openside winger received the ball or the break was made inside him.

It was no accident Ella was at his magical best when there was a strategist to do the navigating (and goal-kicking) alongside him. The Wallabies of that era reached their peak on their 1984 Grand Slam tour of the home nations with Ella at 10 and Lynagh at 12. In the Bledisloe Cup losses of ’82 and ’84, Michael Hawker had been Ella’s foil at inside centre.

The magician needs a strong supporting cast around him, but when Cooper made his final bid to reclaim the number 10 jersey in 2016, his insurance policy was Foley, who had never played number 12 for the Waratahs or the Wallabies previously. 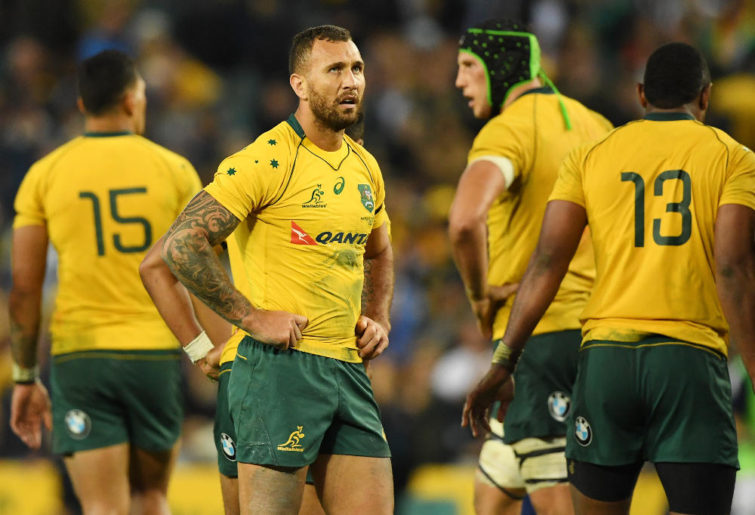 When Cooper was provided with the right support, his talent stood a greater chance of fulfilment. On the one occasion I was able to watch him in the flesh, against Wales in Cardiff back in 2013, that back-up came from the solid Christian Leali’ifano.

With Leali’ifano supplying the extra pair of eyes and hands and doing the goal-kicking, Quade was able to relax fully into his attacking game, and it was an electric sight to behold.

Like Ella, Cooper had an extraordinarily fine nose for space in the wide channels – both how to preserve it and how to exploit it:

Here is the classic Ella double touch in a very different professional scenario. Wales have the width of the field well-covered and there is nothing really on when Cooper executes the wrap play around James Slipper. But the second touch achieves an important aim – it repositions Quade opposite a Welsh forward (Sam Warburton) defending just inside his winger (George North).

By running at North and delaying the pass to the last moment, Cooper sucks both men in to create space for Joe Tomane down the right sideline.

Quade had already performed the same trick to light the fuse for Australia’s second try of the game. This time the shot is from overhead:

The left-arm fend keeps the inside defender away from the ball, and Cooper waits until the last man (North again) stops and turns in towards him before releasing another offload: 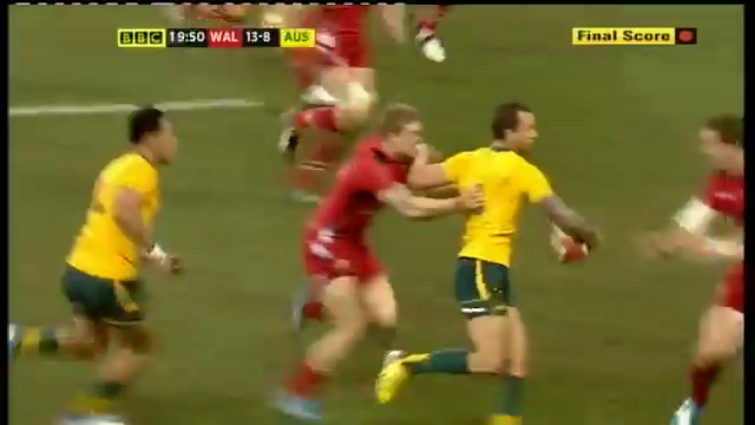 As this example illustrates, one of the most difficult aspects of defending Cooper was presented by his ability to anticipate opportunities from a long way off in the backfield, but only exploit them right in the teeth of the defence. This is probably why Robbie Deans first had the idea of deploying Cooper at fullback in certain situations at the time of the 2011 World Cup:

In the first instance, Cooper receives a kick and saunters towards the chasing line. On this occasion, he uses the threat of the offload to the winger to create space down the five-metre line for a break. He only makes his decision when he is in contact with the defence, not before.

In the second example, Cooper’s kick-off hangs up long enough in the air for Adam Ashley-Cooper to reclaim it above Halfpenny. Cooper is already running from halfway, picking his side to attack and gesturing for Folau to come up on the in-pass option underneath him: 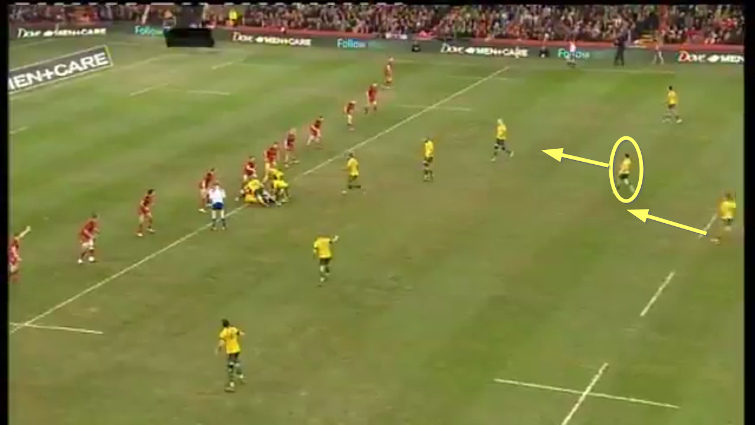 It is a game of cat-and-mouse for the defence, educated guesswork to understand when Cooper will make his run to the line from behind that screen of forwards:

Quade is fully ten metres behind the line when Scott Fardy first bends the line on a short carry off Will Genia. After the dent has been made, he is suddenly at the line on next phase, squaring up the defenders in front of him and floating a long pass out towards Tomane on the right: 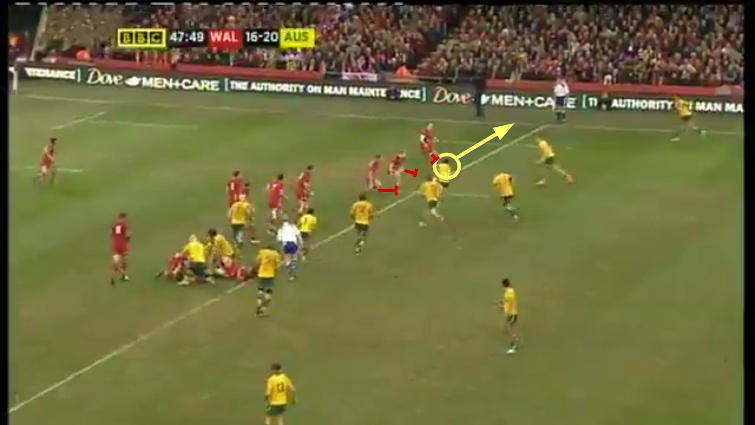 The game in Cardiff was also one of Quade’s best with the boot, whether it was stitching Halfpenny into coffin corner or finding space from his own half:

At the same time, the game finished with Cooper fluffing a drop-goal attempt (all along the ground from in front of the posts) and receiving a yellow card for an early tackle on a player without the ball. That left Australia hanging on for dear life in the final ten minutes for a 30-26 win earned the hard way.

Maybe the insurance policy for Cooper should have extended to his replacement by Foley in the last half hour.

Summary
With both Quade Cooper and Bernard Foley now finished with international rugby, there will be a new king at number 10 for the Wallabies in 2020. Whether he is a cavalier (Isaac Lucas or Noah Lolesio) or a roundhead (Matt Toomua or Will Harrison) remains to be seen.

The debate between the pragmatists and the idealists at stand-off will continue, if not quite as a fiercely as before. But a nagging feeling persists that Australia never quite extracted the best from Quade Cooper, despite his 70 international caps. 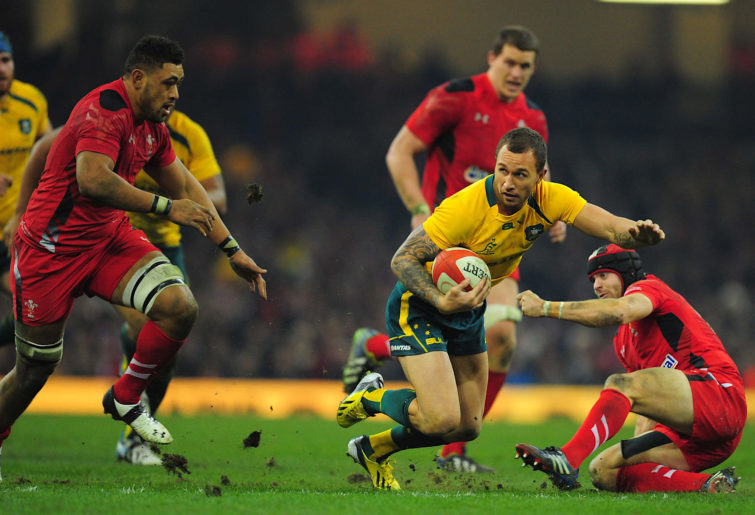 Was he given the right support from inside centre, a strategist to complement his talents playing in the teeth of the defence? Was the policy of substitution ever as fully worked out as clearly as Wales formulated it in the 2019 Six Nations, with the risk-taker (Gareth Anscombe) starting the game, and the hard realist (Dan Biggar) finishing it off in the last 30 minutes?

Back in the 1980s, Mark Ella was at his best as the ball-in-hand magician with Michael Lynagh to do most of the other spade-work outside him. After he retired, ‘Noddy’ took over the reins in full.

Perhaps keeping that balance is the only way to resolve the historical debate over a pint in a new age. We do not want to lose the magic from our great game.