All hail the K League!

Bendtner52
Roar Rookie
7th May, 2020
1
Join the conversation
Advertisement
Write for The Roar

Tonight eyes all over the globe will be tuning in to the K League, and hopefully the folks in South Korea will put on a show.

The K League is the highest-ranked league in Asia and a competition that features ten of the 2018 Korean World Cup squad, five Socceroos, a host of Brazilians and many other footballing nomads.

This comes as a relief for many of us. Those of us who have missed football as a form of escapism have had to fill the time over the last eight weeks watching numerous Premier League years or classic games from the 1982 World Cup. But this Friday night offers us a chance to see some actual live football.

For Australian audiences Optus Sport has pulled off quite a coup in purchasing the rights to two live K League games a week to cement the channel’s place as the home of football Down Under, while a live stream will also be available on YouTube globally.

The K League will be the first example of authorities deeming it safe to play a contact sport after a lockdown, albeit behind closed doors and with a list of new rules prohibiting excessive spitting, blowing your nose or even talking.

Nevertheless, for those of who are new to the K League, it will not be the same product as its original form, as empty stadiums will show a sterile and eerie atmosphere. It may act as a proof of concept for the Bundesliga, the Premier League and indeed the A-League to see the pros and cons of football without fans. But for now the show must go on, and the Korean Republic is giving us a curtain-raiser to kick off proceedings.

Friday night sees Jeonbuk Motors taking on the Suwon Bluewings, which pits the reigning champions against the current Korean FA Cup holders. Sydney-based fans may be familiar with the Bluewings as they travelled to Sydney to take on Steve Corica’s men and came away from Carlton with a 2-2 draw.

The home side, which hails from the south-west of Korea, have enjoyed a glorious decade, winning six of their seven titles in the last ten years, and are looking for their fourth championship in a row. However, this may prove a hard task, as the core of the team, such as Korean internationals Kim Shin-wook and key creator Moon Seon-min, have departed, as has Brazilian hitman Ricardo Lopez.

Portuguese coach Jose Morais, a former assistant to Jose Mourinho, therefore has quite the job on his hands and will be hoping former Nottingham Forest and Sparta Rotterdam striker Lars Veldwijk can turn out to be a worthy replacement. In true Mourinho style he can depend on a solid defence, as two of the backline featured in the 2019 K League team of the year: former Augsburg centre back Hong Jeong-ho and Korean international right-back Lee Young.

Added to this, the recent signing of 2018 World Cup squad member Oh Ban-Suk will complete the back four alongside international teammate Kim Jin-Su to form a formidable backline as a base to defend their title.

Their opponents will be determined to shed their reputation as a cup team, as despite winning four of the last 11 KFA cups they haven’t won the title since 2008. With two Australians – last season’s golden boot winner, Adam Taggart, and former Melbourne Victory favourite Terry Antonis – they may generate quite a bit of interest Down Under as they have potentially the most exciting attacking line-up. Taggart, with his 20 goals in 2019, made it into the team of the season alongside Korean international left fullback Hong Chul and will be hoping to score even more in 2020. 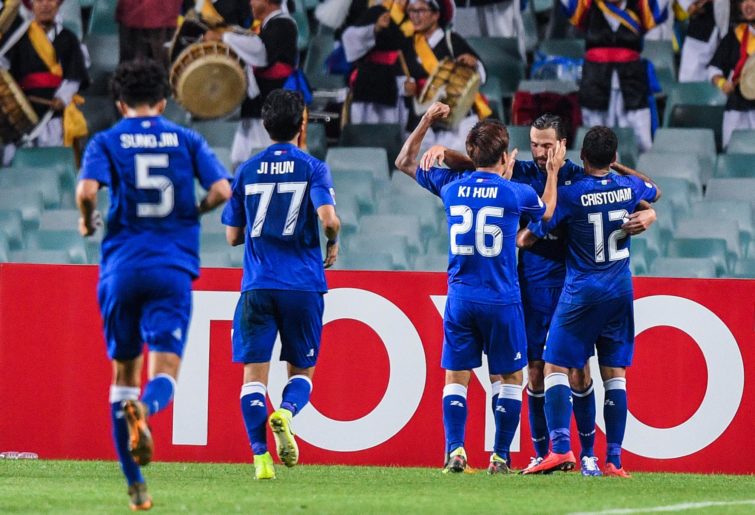 The signing of Canadian International centre back Doneil Henry will provide some solidarity at the back, given he formerly played for both West Ham and Blackburn Rovers in England. Antonis’s ability to influence games as a box-to-box midfielder is clearly missed in Melbourne, but what is the Victory’s loss in the Bluewings gain as he will look to establish himself in his first full season in Korea.

Other challengers to Jeonbuk’s throne include Ulsan Hyundai, Pohang Steelers, Daegu FC and of course the club from the capital, FC Seoul.

Making up the numbers are Busan, Gangwon, Gwangju, Incheon, former Korean giant Seongnam and Korean military team Sangju, all of which are not expected to challenge.

Pohang Steelers, who finished fourth in 2019, have a strong foreign contingent featuring a Russian and a Serbian and have added to this by signing Colombian Manuel Palacios and former Sydney FC midfield lynchpin Brandon O’Neill. They did lose their key playmaker, Brazilian Wanderson, but they’ll be hoping former Huila man Palacios can step into his shoes.

Ulsan Hyundai has possibly the most underrated player of the 2018-19 A-League season, Jason Davidson, and it’s not a surprise Perth have not shown the same attacking threat down the left since the wing-back departed. With Davidson patrolling the left side of the pitch and potentially supplying even more goals for Junior Negrao, who netted 19 goals last season, only one shy of Taggart’s output, the 2019 runners-up could be a dangerous opponent in 2020.

With a supporting cast of Norwegian forward Bjorn Maars Johnsen, former Crystal Palace winger Lee Chung-young, CSKA Moscow veteran Kim In-sung and ex-Cardiff man Kim Bo-Kyung, expect this side to be the league’s top scorers. Also, 22-year-old winger Lee Dong-gyeong is one to look out for. Whether their potentially leaky defence, featuring Dutchman Dave Bulthuis alongside Korean internationals Park Joo-hoo and Kim Tae-hwan, can keep enough goals out is another question and will be their biggest risk in mounting a title challenge.

FC Seoul will want to build on last years third-place finish. With former Arsenal flop Park Chu-young still leading the line, they will depend on exciting on-loan Serbian attacker Aleksandar Pesic to contribute with goals and running, while the attack-minded right-back Go Yo-han was a secret weapon from last season.

Finally, making up the Aussie contingent is Rashid Mahazi, who, though playing for Incheon, a more modest club than some of his compatriots, will also have a chance to show Australian audiences what they are missing in the centre of the park.

Ultimately, despite the list of challengers, it’s likely Friday night will be showcasing the next 2020 K League winners, so victory for either side will be one step towards glory.

Overall it’s an opportunity for football fans across the globe to not only embrace a new league that wouldn’t have necessarily been top of their lists but also get used to what is likely to be the new norm of football behind closed doors. Everyone has an opinion on this, but I think we should give it a chance, otherwise its back to YouTube clips of days gone by.