Many a little older might suggest that Les Johns challenges their place at the top of the Bulldogs’ pecking order.

Personally, Lamb is the best I have seen. Tough, resilient and more skilful and quick than many opposition fans gave him credit for. Lamb built a reputation for excellence, but also one of ruthlessness that occasionally led to controversy and subsequent animosity from outside the kennel.

Since the retirement of the man affectionately known as ‘Baa’, the Dogs have craved a new leader who possesses similar qualities and the innate fighting spirit of Lamb. Despite a premiership in 2004 under the astute leadership of Steve Price and Steve Folkes and consistent semi-final appearances in the Des Hasler era of 2012 to 2017, the club has fallen well short of recapturing anything like their glorious achievements of days gone by.

Some proud and competent men have led the team. Andrew Ryan, Michael Ennis and James Graham all brought their personal leadership skill set to the task.

Yet in looking for a new embodiment of the qualities of Lamb, Bulldogs fans’ eyes often shifted to the man affectionately known as ‘Grub’. 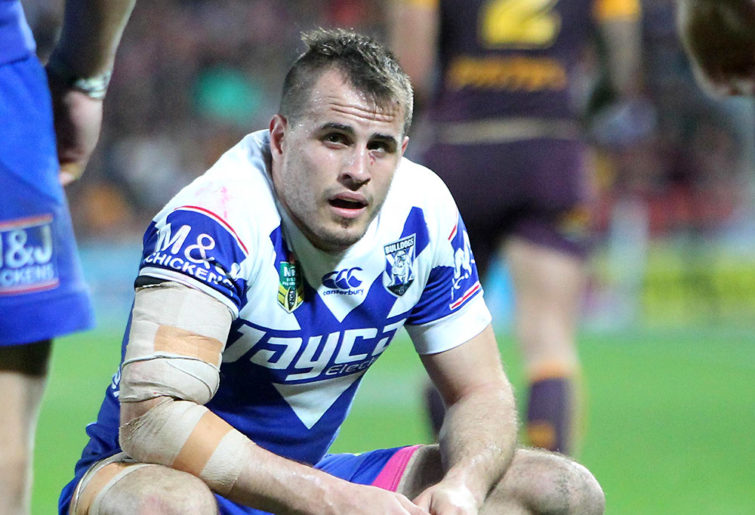 Josh Reynolds debuted for the Bulldogs in 2011, played hooker, and managed ten first-grade games. It didn’t take long for Canterbury fans to gravitate towards him and opposition fans to develop a distinct dislike for the boy from the rough-and-tumble suburbs of inner-west Sydney.

There was always something fractious about his play. Reynolds became that less than intimidating physical figure who appeared to care little about the big boppers around him. He was keen to engage in verbal and physical confrontations whenever the blue-and-whites needed a boost.

He was far from the fastest man on the field, nor was he blessed with amazing footwork, ball-handling or kicking skills. Weighing in under the 90-kilo mark, Reynolds was incapable of imposing himself on a game by towelling up some of the biggest men with a series of monstrous defensive plays.

Instead, the Marist Kogarah graduate hustled and bustled his way through defensive work, grappling and wrestling players to the ground. Occasionally there would be a more dominant tackle, however, Reynolds’ sheer effort and desire to compete kept him in the game.

Without it, he was doomed.

In attack, he would often drift across field looking for runners on angles that challenged the defensive reads of the opposition backs. Time and again, with seemingly not much looming, metres were made. A dummy here, a step there, a busted tackle and Reynolds had created the half chance.

It was nothing like the poetic backing-up of Lamb through the centre of the field that led to so many tries, yet his efforts embodied the same spirit and energy as the Bulldogs great.

Despite obvious limitations, Origin became a reality for Reynolds in 2013 and ’14. Significantly, he played five-eighth in New South Wales’ 2014 series victory that ended a long period of domination by the Maroons.

In 2017, after 138 games in the colours he seemed likely to wear into the twilight of his career, the Wests Tigers came knocking to the tune of a reported $3 million deal over four years. Since then, Reynolds has played just 14 games for the Tigers and rumours emerged during the week of a potential return to Belmore.

For the Bulldogs, it would be a step backwards. With 11 players potentially coming off contract at season’s end, the club is finally in the position to invest in the talent they need to be competitive. It has taken three years to overcome the back-ended contract dramas created by Hasler and co. And if there is any club in the NRL needing to invest heavily in the future and separate itself from the present and past, it is Canterbury.

Reynolds will turn 32 early in season 2021. He has been physically busted for some time and after the consistent unavailability of Kieran Foran in recent times, the last thing the Bulldogs can afford is another long period of absence from one of the men charged with organising the team in the centre of the field.

Such a view will alienate many Bulldogs supporters and as emotionally charged as a return to Belmore for Reynolds may be, the time is nigh to move forward.

Investing in and persisting with young talent such as Jack Cogger, Brandon Wakeham and Lachlan Lewis and finding the right combination to enhance a floundering attack should be the main focus of coach Dean Pay.

With some money to spend, signing a proven, healthy and classy half may also serve the club well. That would enable the younger men to continue to develop – something the Bulldogs need to foster if they are to return to consistent competitiveness.

Josh Reynolds is wanted back at Belmore by many fans, some players and sections of the administration. However, no matter how emotionally comforting and fitting that move might be, it is not what the Bulldogs need right now.