From the vault: NRL Round 10

Avatar
Roar Guru
12th May, 2020
1
Join the conversation
Advertisement
Write for The Roar

This week, we look back at a grudge match between the Roosters and Knights, five finals matches, the 2009 grand final, and a Dragons miracle in Brisbane.

New to this series, we will also tell you what the number one song on the Australian music charts was at the time of the match.

To the current state of affairs first, and for the first time since the suspension of competition, contact training has been permitted among the clubs, while the Melbourne Storm will be expected to return home after the Victorian government approved outdoor gatherings of up to ten people this week.

In the meantime, the series of throwback matches will continue for at least another two weekends, before the rescheduled reboot of the season on May 28.

With both the Knights and Roosters in the top eight, this Round 20 clash in Newcastle shaped as a genuine blockbuster.

Lighting the fuse was the match-up between ex-Bulldogs premiership teammates Willie Mason, who was now in Newcastle colours, and Sonny Bill Williams, who was enjoying an impressive first season with the Roosters after his five-year ban from the NRL expired.

It was also to be SBW’s first appearance in Newcastle since being sent off for a high shot on Andrew Johns in the opening round of the 2007 season.

The match exploded after 15 minutes, when Williams, of all people, put a shoulder charge on Mason, which left the 2004 Clive Churchill Medallist nursing a fractured eye socket, while he also suffered an unrelated calf injury later in the game.

Upon the Nine Network replaying the incident, chief commentator Ray Warren reminded Johns, who ventured into the media upon his retirement in 2007, of the incident in which he was KO’d by Williams six years prior.

Not long after, Shaun Kenny-Dowall scored the first try of the match for the Roosters, but then Darius Boyd hit back for the home side with a length-of-the-field try, outsprinting Roger Tuivasa-Sheck.

An intercept try to Michael Jennings saw the Chooks take a 12-6 lead into halftime.

Former Knights junior Boyd Cordner then scored to put the result beyond doubt before Williams scored at the death to give the visitors a 28-12 victory.

Williams copped a two-match suspension for his shoulder charge on Mason, but returned in time for the Roosters’ ultimately successful premiership campaign.

2014 second semi-final: Bulldogs 18 defeated Sea Eagles 17 at Allianz Stadium
Number one song on the ARIA Charts: ‘Shake it off’ by Taylor Swift

The Bulldogs here became the first team from outside the top four to reach the penultimate weekend of the season since the revamped finals series came into effect in 2012.

After finishing seventh and beating the Melbourne Storm in their elimination final at AAMI Park, the Dogs advanced to the second week where they faced the Manly-Warringah Sea Eagles in the semi-final at Allianz Stadium.

Canterbury raced to a 16-0 lead within a ten-minute period in the first half, before Jayden Hodges (the cousin of former Brisbane Broncos captain Justin Hodges) scored for the Sea Eagles to see the scoreline read 16-6 at halftime.

There was no score for the first 25 minutes of the second half, but Brett Stewart scored with 15 minutes remaining to reduce the margin to four points.

Then, Michael Ennis committed a clanger in defence, allowing Cheyse Blair to score for the home side and lock the scores at 16-all going into the final ten minutes. Compounding matters was Reni Maitua being sin-binned for throwing a punch in the all-in brawl that followed Blair’s try.

After Jamie Lyon missed the conversion, the Bulldogs went up the other end, where halfback Trent Hodkinson potted a field goal to give his side a 17-16 lead.

Excellent defence from Canterbury prevented Cherry-Evans from gaining the field position required to kick another field goal, while Brett Stewart was also unsuccessful in his attempt.

Hodkinson then stepped up to kick his second field goal send his former side, grand finalists the previous season and premiers in 2011, crashing out of September in straight sets.

Round 26, 2003: Dragons 26 defeated Broncos 25 at Suncorp Stadium
Number one song on the ARIA Charts: ‘Where is the love?’ by Black Eyed Peas

When St George Illawarra flew to Brisbane for the final round of the 2003 season, few gave them a chance of toppling the home side.

With half their best side on the sidelines due to injury, the Dragons were next to no chance of playing finals, their hopes having been extinguished the previous Sunday when they lost 42-8 to the Knights at Kogarah Oval.

However the Broncos had lost their last six matches and were looking to avoid a record seventh consecutive defeat.

The half-strength side, with names such as Trent Barrett and Mark Gasnier out injured, stunned the crowd with two tries in the opening ten minutes. However, the Broncos hit back with three unanswered tries to take an 18-12 lead.

They later led 22-18 until Dragons hooker Mark Riddell forced his way over and converted his own effort to take a 24-22 lead.

There was more drama to follow as Petero Civoniceva was sin-binned for fighting. Shortly after, centre Michael de Vere kicked a penalty goal to lock the scores at 24-all with ten minutes to play.

With six minutes to go, the Broncos appeared to have the match won when fullback Darren Lockyer slotted a field goal, only for Riddell to pot over an unlikely long-range penalty goal at the death to deny the hosts their second win at the newly rebuilt Suncorp Stadium.

The 2010 season saw the Gold Coast finish in the top four for the second straight year and despite injuries to key players, including former Dally M Medallist Preston Campbell, the Titans performed strongly in their second ever home final, leading 22-6 at halftime.

William Zillman, who stepped up in Campbell’s absence, scored two first-half tries and put on a try assist for Kevin Gordon in the second as the Titans claimed a 28-16 win.

As of 2020, it remains the only win by the Titans in a finals match.

2017 first elimination final: Cowboys 15 defeated Sharks 14 at Allianz Stadium
Number one song on the ARIA Charts: ‘Look what you made me do’ by Taylor Swift

These sides had a habit of facing each other in September, with the Sharks winning a controversial elimination final in 2013 and then a preliminary final in 2016 on either side of the Cowboys’ landslide 39-0 win in the 2015 semi-final.

North Queensland entered the post-season without injured co-captains Matt Scott and Johnathan Thurston, having scraped into September in the final round after results went their way.

The reigning premiers scored after just two minutes throug halfback Chad Townsend, but the major turning point came when James Maloney was sin-binned before halftime, his side leading 8-2.

The Cowboys hit back ten minutes after the resumption, with Kyle Feldt scoring their first try that Ethan Lowe failed to convert, but Jack Bird scored shortly after for Cronulla to lead 14-6.

A try to Jason Taumalolo, followed by a conversion to Lowe reduced the scoreline to 14-12, before Lowe potted a penalty goal at the death to force extra time.

In finals matches, two periods of extra time played, five minutes each way. If scores are still tied after that, then golden point is invoked.

But Michael Morgan kicked a field goal in the first period of extra time that wound up being enough to knock the Sharks out of September.

Round 13, 2010: Eels 24 defeated Storm 10 at Parramatta Stadium
Number one song on the ARIA Charts: ‘OMG’ by Usher featuring will.i.am

It may have been the first meeting between the two sides since the previous year’s grand final, which the Storm took out 23-16, but Melbourne had since had that premiership and other team honours stripped due to salary cap breaches.

It was therefore no surprise that the Storm were booed when they ran onto the since-demolished Parramatta Stadium, with Eels supporters holding such signs as “grand final forecast: no Storm” and “Go home you cheat$”.

Sadly, history will tell us that the Eels did not receive the premiership that was taken off the Storm, neither did Manly receive the tainted 2007 title. Instead, those premierships remain blank in the history books.

The match itself was spiteful, with Origin opposites Jarryd Hayne and Billy Slater both involved in a second-half scuffle that saw the latter sin-binned, much to the delight of the 7572 fans in attendance.

Slater was first to score for the Storm, but the Eels dominated the rest of the match to win 24-10 and partially gain some revenge for the previous year’s grand final defeat, which was the Eels’ second this century after the upset loss to the Newcastle Knights in 2001.

After five years without finals, the Panthers, coached by ex-Raiders mentor Matthew Elliott, rocketed up the ladder in 2010, finishing just behind the Dragons on the ladder with the best attack of any team in the competition.

The Raiders, meantime, continued a pattern in which they made the finals every second season, having not reached consecutive finals series since 2003-04 (a hoodoo that continues to the present day).

The match started on time, however the Nine Network missed the opening minutes owing to the extra-time thriller between the Wests Tigers and the Roosters some 60km away at Allianz Stadium, which the Chooks won 19-15 in golden point extra time.

Neither side extended their lead beyond six points in the first half, and Canberra led 18-12 at oranges.

When winger Reece Robinson scored after the interval and it appeared the Raiders were on their way to a huge win. The home side hit back through Sandor Earl, although Gordon missing the conversion left Penrith trailing 24-16.

Earl scored his second try in spectacular circumstances, which was converted by Gordon, to set up a grandstand finish, but ultimately the visitors hung on for a 24-22 win.

Though they did make the finals in 2007, the Rabbitohs were still rebuilding when they faced the Wests Tigers at the SCG in a Heritage Round match that marked the 40th anniversary of the 1969 grand final between Balmain and Souths, won by the former.

After it had been 10-all at halftime, the Tigers, who hadn’t made the finals since winning the premiership in 2005, raced to a 22-10 lead early in the second half thanks to tries from soon-to-be NSW Origin debutant Robbie Farah and fullback Tim Moltzen.

But the Bunnies would not give it up without a fight, as Fetuli Talanoa scored with less than 20 minutes remaining.

Then, with less than five minutes remaining, Beau Champion crashed over and Issac Luke converted for a 22-all scoreline.

Farah attempted a field goal for the Tigers, but it went wide, then Craig Wing had his attempt charged down.

But the Bunnies were not to be denied, with Nathan Merritt stepping up to kick his first career field goal at the death to give his side a 23-22 victory.

“It’s the best field goal I’ve ever kicked in my life I think,” Merritt said after the match. 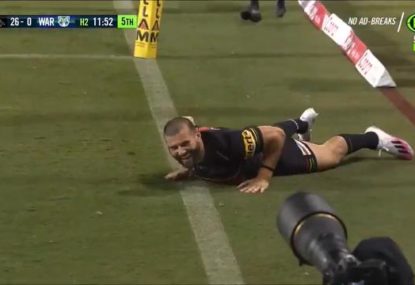