adriandon
Roar Rookie
14th May, 2020
3
Join the conversation
Advertisement
Write for The Roar

Here we are, the start of December 2026, and what a month of football we have ahead of us to finish a great year.

It all started in March, and after 30 rounds for the A-League and 26 for the B-League, we had tight league finals last weekend.

Western Sydney Wanderers claimed the A-League premiership in the last round during the simultaneous Saturday night matches. South Melbourne won the B-League to secure automatic promotion, and Central Coast was confirmed for automatic relegation after finishing the A-League in 16th position.

In June we paused for the World Cup in North America and were proud of Australia’s Round of 16 finish and New Zealand’s respectable group stage performances.

Now we have 15 big matches to end 2026. Here is a guide to this month’s festival of football:

Friday, 4 December, at 7:30pm
The FFA Cup final between Adelaide United and Melbourne Victory is sold out at Adelaide’s new CBD stadium, which has provided large and boisterous crowds all season. The cup this year has once again been a huge drawcard for the local game, with the pick of the upsets being the Moreland Zebras win over Sydney FC in the Round of 16 back in May. Will the final see Johnny Warren Medallist Tom Rogic claim silverware in his first season back at Melbourne? 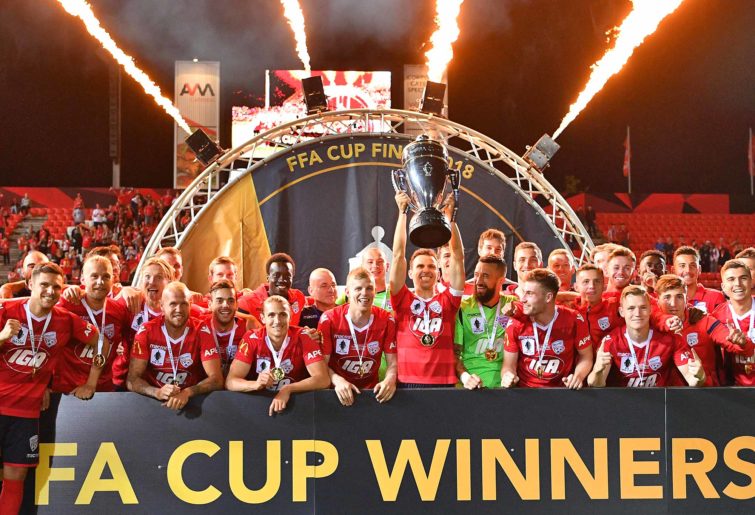 Sunday, 6 December, at 6pm
The first leg of this promotion play-off semi-final sees the fourth-placed Melbourne Knights hosting third-placed Tasmania. Can the young Viduka brothers find a way to get the Knights off to a strong start in this play-off?

Wednesday, 9 December, at 7:30pm
The first leg of the A-League relegation play-off has the 15th-placed Canberra hosting the 14th-placed Newcastle. Will cards be a factor again, like in the fiery clash earlier in the season between these rivals?

Friday, 11 December, at 7:30pm
The second quarter-final sees fourth-placed Adelaide host fifth-placed Sydney. How will the Adelaide crowd react to the return of Al Hassan Toure after Sydney poached him in the off-season?

Saturday, 12 December, at 5pm and 8pm
The third and fourth quarter-finals see second-placed Victory host seventh-placed Wellington followed by third-placed Brisbane Roar hosting sixth-placed Perth Glory. With some of the most attacking teams in action, will this Saturday night double-header be a goal-fest?

Thursday, 17 December, 7:30pm
It’s D-Day when Newcastle hosts Canberra in the second leg of the A-League relegation play-off. Can Ernie Merrick’s Canberra topple his former side?

Friday, 18 December, 7:30pm
The A-League championship first semi-final will be between the winners of Wanderers-Western and Adelaide-Sydney. Will we see a Sydney derby at Stadium Australia that breaks the all-time attendance record?

Saturday, 19 December, at 7:30pm
The second semi-final will be between the winners of Victory-Wellington and Brisbane-Perth. Can Perth do the unthinkable from sixth again?

Sunday, 20 December, at 6pm
If the B-League promotion play-off final is half as thrilling as last year’s match, we are in for a Christmas treat. When the winners of Auckland-Wollongong and Tasmania-Knights battle it out at the home of the highest-placed team, will penalties be the promotion decider again?

Saturday, 26 December, at 7.30pm
The A-League championship final on Boxing Day evening has become one of the highlights of the annual sporting calendar not only in Australia and New Zealand but also for the growing fan-base in Asia. Some big clubs are in contention this season, so could last year’s ratings bonanza be surpassed?

All games will be live on Optus Sport, with SBS also showing some of the games (check your local guides). It promises to be a fantastic conclusion to a brilliant 2026!