With Hyundai now severing $6 million worth of ties to the FFA and Foxtel circling ominously with a likely intention to lessen its commitment to football, some Australian fans of the beautiful game have been concerned and jumpy over the past week.

The sheer dollar impact of Hyundai’s decision to step away from its long-standing and vital corporate involvement with the game will be considerable.

Both decisions will leave holes in a budget that must right now appear about as uncomfortable as a Donald Trump press conference for the FFA board.

No one blames James Johnson and his new administrative team. It would be stupid to do so with world sport continuing to experience the global effects of COVID-19, as it continues to rage through many nations.

Thankfully, and potentially due to Australia’s remote location, sports are about to recommence. Rugby league should be the first to do so, as long as the players can behave themselves long enough to allow that to happen.

The AFL appear to not be too far behind, with a June 11 restart date appearing likely and training about to recommence for the clubs around the country.

Rugby union appears to be in a desperate state, potentially without a broadcaster. A limited domestic competition between the local Super Rugby teams is the best the game will be able to provide its fans in the short term.

A-League football is rumoured to be circling a month of action in August, when the final five rounds of home-and-away matches will be played, in addition to the finals matches that normally encompass three weeks.

To say that the culmination of the 2019/20 A-League season will be brisk, chaotic and frantic is something of an understatement.

Playing eight weeks of football in a month will be sheer mayhem. Fun, but mayhem.

All the while, the financial implications for professional sport around the country continue to pull headlines, and rightfully so. For the A-League, a $3.2 million salary cap appears unsustainable in the near future, considering a potential slashing of the broadcast funds provided by Foxtel and the need to locate and commit a sponsor as generous and loyal as Hyundai.

Discussions around the challenges of maintaining the minimum wage for A-League players have already begun, as has talk around the task of keeping the higher paid international and marquee players in Australia for clubs who simply will not have the funds to do so.

While they are both realistic concerns in the medium term, it strikes me that the 2019/20 A-League season is likely to recommence in August and play out to a full conclusion with Sydney FC and Melbourne City battling out the grand final in a fan-less stadium.

Then, the players will remain in training for the most absurd turnaround between seasons and a start to the 2020/21 campaign some time in November.

Frankly, it all sounds a bit mad and surreal. However, fears of the death or demise of the domestic league may well have been exaggerated, with the significant issues of international travel and many countries still grappling with the effects of COVID-19 potentially protecting the Australian game from catastrophe.

With Australia appearing to have ridden the worst of the coronavirus wave and hopefully emerging far less affected than other parts of the globe, football will be a pleasant distraction after the most unusual of times.

The A-League will resume before many international leagues and likely amid a more confident and positive environment than those existing in many nations.

Hence, despite pay cuts, sponsorship and commercial concerns, broadcasting stress and a restraint in spending that appears a certainty for all 11 A-League clubs, the players themselves are certain to play.

Where else could they possibly go? 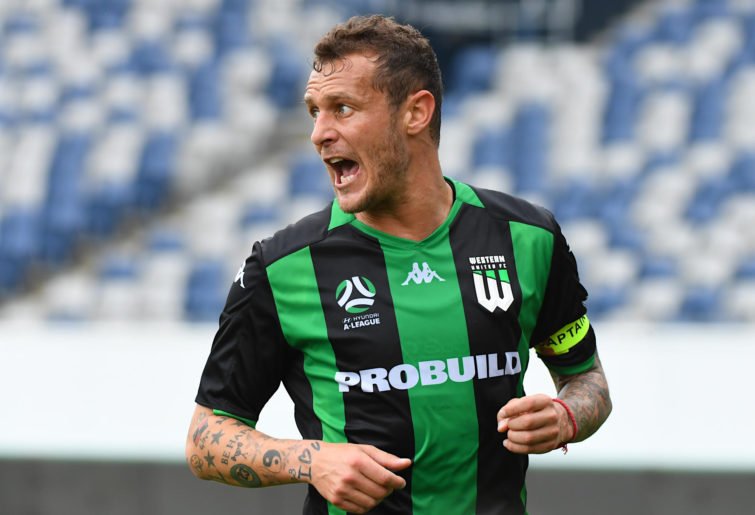 Will marquees like Alessandro Diamanti stick around in Australia? (AAP Image/James Ross)

Marquee players like Ola Toivonen, Panagiotis Kone, Alessandro Diamanti and Gary Hooper may well have nowhere else to go and the A-League may acquire their services, at a reduced cost, for yet another season.

The situation may also afford the opportunity for domestic stars like Jamie Maclaren and Riley McGree to remain in Australia for another season, with interest from off-shore waning until a financial rebound begins to gain momentum.

There is a great deal of guess work going on in the world right now. However, with Australia beginning to ease restrictions and slowly open up its economy and society, a brisk return to A-League play and a lack of opportunity elsewhere may well keep the elite competition viable in spite of a seemingly weakening financial position.