Australian and world sporting codes have been interrupted before with the Spanish Flu impacting sport in 1918.

The global coronavirus has gone one step further, causing Australian and world sporting codes to pause. It is our love of our sporting teams and nostalgia for the past that will always continue despite these hard times ahead.

The impact of playing on had its ramifications, though, as “The VFL season went on without disruption although up to eight people involved in the sport off the field are said to have died”.

Rugby league was similarly impacted by the flu. Rugby league historian Terry Williams writes “when you read the newspapers of the time you get an understanding of the impact the Spanish flu was having from the number of forfeits and cancelled fixtures”.

Ramifications were felt more severely overseas, though. Journalist Phil Thompson writes the World Series of 1918 between Babe Ruth’s Boston Red Sox and the Chicago Cubs “still went on as planned, fuelling the plague and infecting patrons at Fenway Park”. It has even been reported that Babe Ruth, who played in the 1918 series, also fought the disease.

The Spanish Flu and the coronavirus have had a negative impact on Australian and world sport. Fans will continue to love their sport and support their teams despite the disappointment that no sport is being played at the moment.

American journalist and author Mark Shields writes “To be a Boston Red Sox fan is to have grown up with disappointment and defeat”.

Similarly, being a fan of the South Sydney Rabbitohs has had its ups and downs over the years. Most notably the Rabbitohs were kicked out of the competition in 2000, combined with having an NRL trophy drought of 43 years, which ended in 2014. Despite our teams’ historical lack of success, the popular support for our respective sporting teams continues on.

Despite hard times throughout sporting teams’ history, we see teams honour their past by wearing retro and throwback designs. Two of the most popular sporting codes in Australia, the AFL and NRL, have a retro round every year.

For example, the Geelong Cats released a retro jumper for the AFL’s retro round last August. The jumper included the crouching cat logo on the collared jumper, meshing the Cats’ VFL/AFL history of the 1910s through to the 1980s. The love for the past continues.

It is because of our love of our sporting teams and our desire to rekindle the glories of yesteryear that we will continue to carry nostalgia for sport in these hard times.

Will future generations continue viewing their teams’ sporting past with such nostalgia? History has taught us that fans will continue to be nostalgic for their team despite the negative aspects of the era.

When all this social distancing is over, we will see fans cheering on their favourite teams of the past, future and present.

The winners of 21 premierships, the South Sydney Rabbitohs are a foundation club established in 1908. 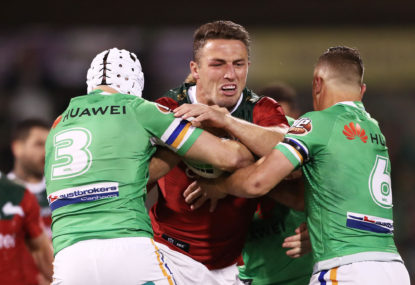 South Sydney are the first team in 20 years to lose three straight preliminary finals, but Wayne Bennett is confident his team can only improve next season.