Possibly the most curious case in the NRL over the most recent few seasons has been the under achievement of a stacked North Queensland side.

After surging to a shock grand final appearance in 2017 without their star halfback Johnathan Thurston, the consensus was that with his return in 2018, premiership glory was within reach.

Yet they didn’t only fall short of that glory they missed the top eight altogether, and followed it up in with another dismal season in 2019 where they finished even lower on the ladder.

Throughout this slide down the NRL pecking order there have been a lot of different narratives supplied by the clubs coaches, the media, and interested onlookers. All of which, with the luxury of hindsight, turned out to be half truths.

Almost everything and anything was off at any given time, or all at the same time. The once vaunted Thurston/Michael Morgan halves combination now seemed clunky.

Matt Scott, the game’s premier big man, had a chronic neck injury which plagued the finish to his career and caused constant reshuffling of fairly thin front row stocks.

Te Maire Martin showed flashes of a future, most notably when he and Morgan blitzed everyone to scrape into the finals then stomp their way to an unlikely grand final, but then was tragically forced into premature retirement. 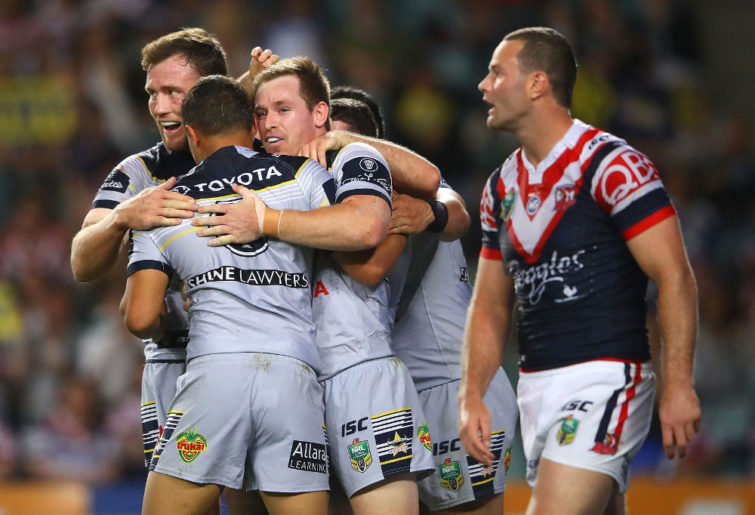 The Cowboys in better times. (Photo by Cameron Spencer/Getty Images)

They lost Kalyn Ponga. I’ll repeat that they let Kalyn Ponga go in favour of keeping a fading Lachlan Coote.

Ben Barba’s off-field problems imploded his Cowboys career before it even started.

Their winning formula became stale. The no errors, minimise risk, force repeat set, multiple block play out the back attacking approach was predictable and slow. They ranked dead last in offloads in 2018, and 12th in 2019.

Morgan did not fire coming out of Thurston’s shadow as expected and suffered numerous injury setbacks. He is now the club’s captain and co-franchise player and the added burden of responsibility seems to have hindered more than helped his performance.

The positives were very thin over the last few seasons, I can only really count two. Franchise player Jason Taumalolo just always delivered, not once has his historic ten-year contract ever seemed like a bad investment.

Kyle Feldt overcame a hot and cold form trend to become one of the side’s most consistent attacking contributors, he was actually extremely unlucky to miss out on State of Origin selection.

And here in 2020 they now sit at 1 loss – 1 win from the first two rounds. Naturally with the shoddy resume of the last few seasons after that first-round loss, the knives were out for head coach Paul Green.

A second-round win offers some small respite but he seems destined for the ‘will they or won’t they’ sack him media conjecture this year.

Can they get back on the horse and tilt for a title? I’m admittedly very biased but I definitely think so, and that this interrupted season will very much play in their favour with more time to settle into new on field partnerships.

Much and more has been made of the return to the NRL of Valentine Holmes and whether or not he is an out and out fullback. The noise surrounding that subject doesn’t seem to be affecting Paul Green though.

Val was bought as a much-needed first-choice fullback and it very much looks like he will be given all the rope he needs to settle into the position.

He improved markedly from Round 1 to round 2 and showed a similar progression as a fullback in previous seasons with the Cronulla Sharks despite a shaky start at back with them as well. Morgan will need to find ways to get Holmes’ attacking talents as involved in the game as possible, but being brothers-in-law you can pretty safely assume those conversations are being had verbatim.

Scott Drinkwater was an astute pick up for the Cowboys late last season after falling down a stacked pecking order at the Storm. He showed an instant attacking threat injection into the Cowboys lineup which has continued this year despite the shift into the five-eighth jersey to accommodate Holmes.

Speed, skill, a massive dummy, with a step and a swerve. He is the type of player that can make do with even only half an opportunity, or sometimes even seemingly no opportunity.

The most important piece of the Cowboys puzzle in my eyes and very much the least hyped pickup is Esan Marsters. His addition is the most considered and relevant change of direction for the club since Lachlan Coote helped complete their attack for a 2015 premiership drive, or even Johnathan Thurston for similar reasons in 2005.

Centres are undervalued and some would argue under utilised in modern rugby league. The constant use of out the back block plays for the fullback to ball-play on the fringes has taken space away from them and reduced the centre’s attacking options/lines they can run.

Modern centres have been relegated in attack to wingers who stand one man in and wait patiently for a glimpse of the ball.

There is no real early ball in the NRL at the moment except for perhaps Latrell Mitchell and James Roberts, you need to possess the absolute pinnacle of game-breaking talent before coaches and halves will even consider offering time and space to their centres.

Marsters is a very different type of centre to Mitchell and Roberts though. He produced the most offloads for an outside back in the competition last season, and has already more than doubled his average per game to sit atop the comp for offloads outright this season.

The real key though is that Marsters plays at right centre on a stacked Cowboys right edge. Morgan has been playing a lone hand seeking to spark the Cowboys attack for a long time now, with four true opportunities now being thrown his way per game there a real chance for him to turn those into rolled gold and elevate himself back to his competition leading attacking form of 2014–2018.

The key word of course being chance. In their stadium-opening Round 1 loss to arch rivals the Brisbane Broncos, Morgan had one of Marsters peach of an offload landed in his lap. 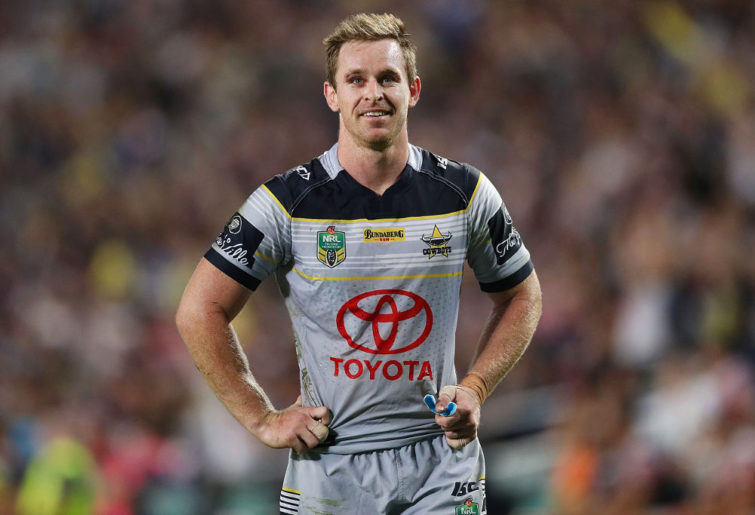 I screamed at the television as Morgan stood still then dished an average pass choosing to point and direct, rather than push and run. Marters offloads will do no good if they are not going to be used and Morgan’s shelved running game very much needs to dusted off and reinvigorated.

If he continues to not push on Marsters offloads Paul Green may have to face some disharmony with his captain and shift him to the left and offer the very attacking minded Drinkwater the benefits of Marsters playmaking.

The Cowboys question looms and for me personally the 29th of May cannot come soon enough.