In a season has been below average for the Central Coast Mariners, Gianni Stensness has shone brightly in the heart of midfield.

Playing his first full season in the A-League, he has been an instrumental member of their midfield, starting every game bar one this season. He has combined tremendous athleticism with composure on the ball, and the Mariners will be relieved to have him on a multi-year deal.

This is the fourth interview in my ‘Footballs Future series’, which offers a unique insight into the A-League and W-League’s best young stars.

Jack George: What have you been up to during self-isolation?

Gianni Stensness: I’ve been waking up in the morning and doing some exercise, doing football training or if the surf’s good going for a surf. I’ve been doing university at the moment as well, so during the day I get stuck into some study, and I’ve been chilling out when it gets to the afternoon and night time.

JG: What have you been studying at university?

JG: Oh wow, I’ve been studying those electives at school! What has then under twenty world cup done for your career?

GS: That was probably the thing that made a name for myself. I had only had five caps in the A-League for Wellington and only one start so no one really knew me, but when I started and scored three goals at the world cup it really boosted my profile and I think it really opened my eyes to the big stage as well.

It was probably the biggest competition I’ve played in.

JG: It was a great goal as well! Who is your favourite football team?

GS: I’d say Barcelona. I have been supporting them from a very young age.

JG: Who were your footballing idols growing up?

GS: I think Ronaldinho’s definitely my favourite player ever. I liked to watch his videos and he really gets me in the mood to play football. I think we’re probably not like match players in the sense that he was a very attacking player and I’m more of a defensive midfielder, but he just loved football and portrayed that when he was playing. 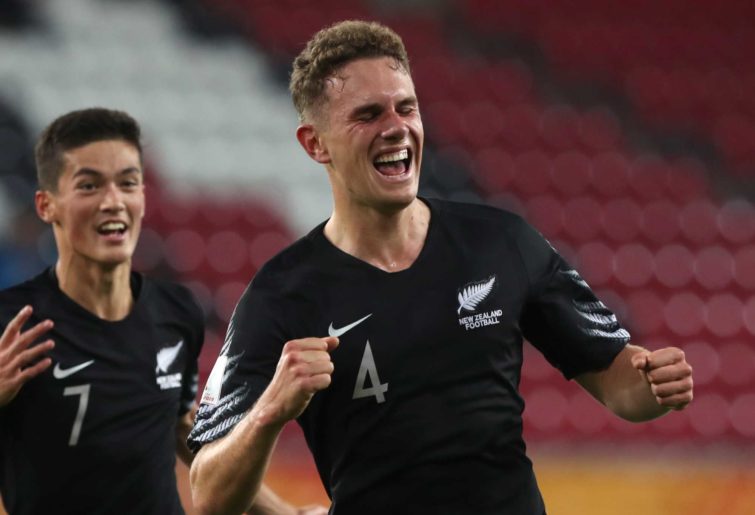 JG: But you have played as an attacking midfielder for the Mariners once or twice this season. Do you feel comfortable playing in that position?

GS: Yeah, in the game we played against Brisbane Roar I started in that ten role. We had a few sixes at the time. Giancarlo (Gallifuoco), (En Sun) Kim, Nizzy (Josh Nisbet) and myself, and I think there was a couple of injuries in the ten position. Especially at the start of the season I was doing some dribbling and stuff and I like to drive forward with the ball, so he (Alen Stajcic) asked me during the week if I was comfortable playing attacking midfield.

I had played that position when I was growing up and a year early, but not recently. I am very comfortable playing there and I love playing attacking midfield.

JG: What are your goals for your career?

GS: I’d say that one goal for my career is to start being much more successful with the Mariners, as I’ve got a long term contract with them. I want to help lift them to a better position in the table. We started off alright this year but didn’t keep the results going.

JG: How did it feel to make your A-League debut?

GS: It was pretty amazing! It was funny that it was at Central Coast Stadium, where I’d been many times before, watching the first team play with the youth team. I was actually pretty sick that week so I was loaded up with meds and stuff, but I got out there and Mark Rudan was really keen to debut me there. All of the training and time I had put in came to fruition there.

JG: Did you watch Australian football when you were a kid?

JG: What was it like scoring that bicycle kick as your first goal for the Mariners?

GS: I was very proud of that goal and it was a pretty special way to kick off my goalscoring tally in the A-League. It was unfortunate that it came during that game, it meant that I couldn’t really celebrate it and it was a mix of emotions because we were losing pretty badly and we weren’t playing very well, but it always feels good to score especially when it doesn’t come that often.

GS: I think it was a good season for me. It was my first proper season in the A-League and I managed to stay in the starting eleven every game bar one. It was a very successful season for me.

It was a long season and it was hard not to get down when we were losing a lot of games, and I think I wasn’t improving much at the end whereas at the start of the season I felt I was improving. But overall for me, it was a very successful season.

Wellington Phoenix are coming to Australia to complete their A-League season but the coronavirus pandemic has wiped out grassroots football for at least a month.