Sandro Tonali has the potential to be one of the world’s best holding midfielders in the near future.

Born and raised in northern Italy, he grew up in the province of Lodi, which is very close to Milan. Tonali says he grew up as a Milan supporter and modelled his game after legendary defensive midfielder Gennaro Gattuso.

Sandro Tonali stands at five foot 11 inches, and his footballing abilities and maturity far exceed his young age of 20.

Tonali made his first appearances in 2015, playing for the Brescia under-17 team and the Brescia second team up until halfway through the 2017-18 season, when he broke into the first team, who were still playing in Italy’s second division.

His performances over a two-year span in the second division brought a lot of attention. Three goals and seven assists helped the side to a promotion to the top flight of Italian football, Serie A, and he was awarded Serie B player of the year.

Brescia has had no success in Serie A this season at all, sitting at the bottom of the table with only four wins from 26 games. Despite the disappointing campaign, Sandro Tonali is the undisputed leader of the group, at 20 years of age. 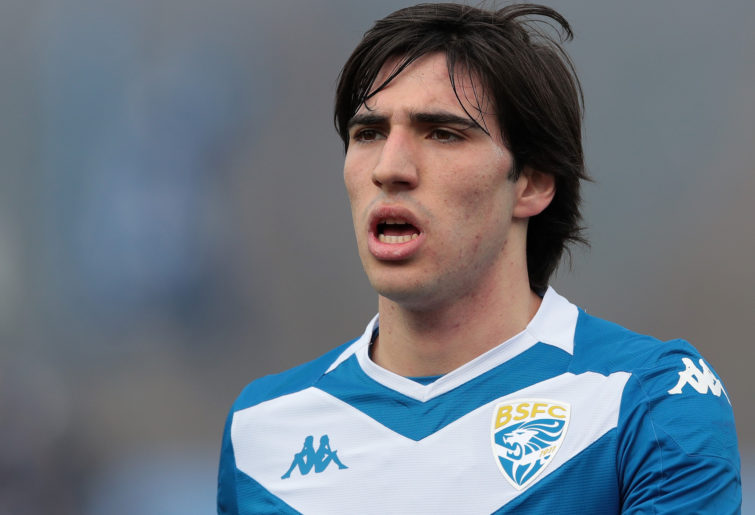 He has still been able to shine, with a stunning free kick against Genoa drawing comparisons to Andrea Pirlo. So has his elegant passing game and the ability to take hold of a game and dictate the speed of the match. There are too many similarities, including the hair, to ignore.

We also see qualities similar to Gennaro Gattuso, who was an idol for Tonali at a young age. Tonali has the defensive edge that a lot of midfielders can lack. His hard-working nature in the midfield causes real problems for an opposition’s attack.

Tonali has gained praise from Pirlo recently, with the legendary midfielder stating that Tonali is the best player in Serie A and that the Brescia youngster is much more complete than he was.

This is all being said while Tonali is playing for an under-performing team.

Tonali has also made an impact with the Italian national side, already having played six games. Tonali is expected to play a major role in Italy’s squad for the Euros, whenever that will take place.

Inevitably European giants have started to focus on signing the midfielder. A race for Tonali’s signature has heated up over the past couple of weeks, with Inter Milan and Juventus reportedly fighting it out until the end for the young Italian.

We will have to wait and see, but it is hard to see Tonali staying another year at Brescia.

Sandro Tonali has a big future ahead of him. With so many comparisons and rumours surrounding the 20-year-old, he has kept his head and is producing week after week.

The heir to Pirlo’s throne? Only time will tell.