My brother was five years older than me and a huge Wayne Pearce fan so naturally I would follow whatever he did. After back-to-back heartbreaking grand final losses for the Tigers in the late ’80s, I was in my early teens by then and decided it was time I followed my team, the St George Dragons.

Only two years later my team was in the grand final but lost consecutive grand finals to Brisbane. I was convinced I was cursed, so by the time 1994 rolled around, I wasn’t paying too much attention to my beloved Dragons, for fear I was the dreaded jinx.

I had finished school the year before and went straight into work as a wedding DJ, so my weekends were non-existent, meaning the only time I could let my hair down was during the week. Thankfully there was a place I could go.

The Roundabout Hotel, or Rounders as it was commonly referred to, was located on Forest Road in Hurstville.

On a Tuesday night they had dollar drinks, so one Tuesday in 1994 I found myself there with my best mate ready for whatever the night may bring.

As we chatted away, my mate stopped mid sentence, his jaw dropped and he struggled to get out his words before blurting out: “Oh man, that’s Gorden Tallis!” 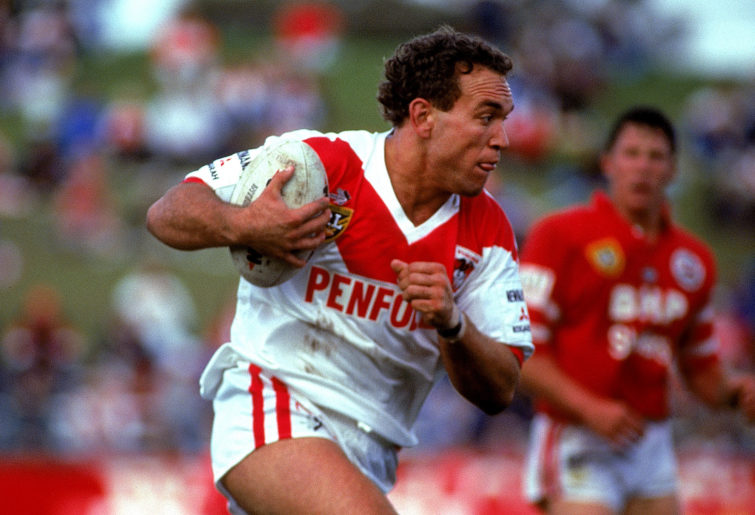 “Who is that?” I said as I turned around to see who my friend was so enamoured with.

“What! And you call yourself a Dragons fan”.

He had a point, but as I eluded to earlier, the pain of my fandom jinxing two teams to lose consecutive grand finals within a few years of each other had me trying reverse psychology, and my support was by not paying attention.

My mate went on to explain what a damaging runner this Gorden Tallis was for St George and how he would lead the club back to the the grand final. This was long before YouTube and social media existed, so I had to imagine all my mate told me on this exciting young prospect.

A few hours passed and we were at that point of a night out where it can go either way, but hey, it was dollar drinks and it was my weekend so I wasn’t going to bail early.

My mate went and got another round while I made another trip to the bathroom. It was empty, most patrons had left hours earlier, no doubt due to having to get up and go to work early the next day. Not me, though, I was going to sleep in and get up at the crack of noon.

As I stood and let the dollars I’d spent flow, the door to the bathroom opened and then slowly closed. A figure stood next to me, but as far away as possible, almost as if they were practicing social distancing way before it became a thing.

I could see a hulking figure in my peripheral and decided to break the golden rule and turn to greet the man mountain, only to realise it was none other than Gordy himself.

I felt like I should say something, so I managed to get out “Hey mate, how’s your night going?”

Tallis turned his head and looked through me like a cane toad ready to crush the cockroach that I was. I don’t want to exaggerate, but it was almost as bad as what Gordy did to poor Brett Hodgson some years later in Origin, but with no physical contact.

The silence was deafening, to say the least. I quickly looked down and made a beeline to the sink to wash my hands and leave the bathroom before I was rag-dolled like Brett Hodgson.

Now the night had gone either way. I went and found my mate and said: “Let’s go after this one”.