Loose
Roar Rookie
25th May, 2020
23
Join the conversation
Advertisement
Write for The Roar

Participating as a shot-putter while studying at the University of Queensland, Tom had Australian Olympic squad trials until converting to rugby.

“I won state championships from U-9s to U-15s and also competed in other throwing events,” he says. “If I had the same attitude towards nutrition, training and recovery I had later with rugby, it might have been a different story, but I was fresh out of home and clueless about how to treat my body.”

Taking up rugby in the process of receiving a third-level education, it’s testament to Court’s determination and self-belief that he reached the heights he did.

“Considering what I’ve achieved, it’s hard to wish I did it differently,” he says. “I had a colleague involved with the Fijian side and he tried to tempt me. There were other chances, but if you change the past, you might not end up where you are.

“I didn’t have the injuries that other kids did playing through high school. Because I was older, I figured this was my last shot of making it. I did well at shot-putting but hadn’t kicked over to competing nationally. Plus, I was having dizzy spells and my blood pressure was really high, so I needed to make a change health-wise.

“People said I started too late and would never make it to the top. It’s nice proving people wrong, but wouldn’t recommend basing a career on it.” 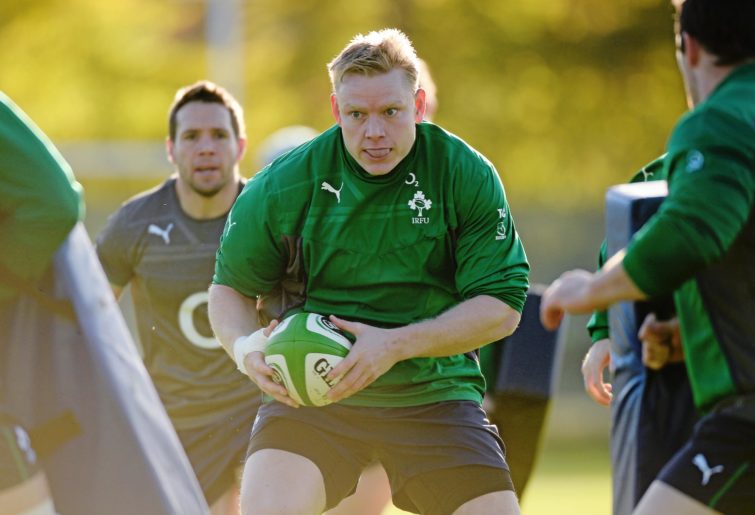 Brisbane born and raised, Tom had no qualms about leaving for Ulster to further his prospects, a move ultimately leading him to declare for Ireland.

“With the Queensland Reds, if you play more than four games, they have to give you a full-time contract. I was a late addition but played the first three games. They had no injuries so didn’t offer a current contract, hoping I’d hang around and develop for the next year.

“My agent looked around Australia first, but the other states didn’t have any opportunities. I looked abroad and Ulster offered a contract. Two weeks later I quit my job, packed up university and left my fiancee to move to Belfast.

“Playing in Ulster doesn’t commit you to play for Ireland, but there was an opportunity to go on the Ireland A tour. I couldn’t pass it on, and that tour spurred me on to match what other internationals were doing.”

Upon the young prop’s arrival, Ireland’s lack of depth in that area and Court’s flexibility between loosehead and tighthead further enhanced his future expectations

“To the uninformed it looks easy, but at international level the difference is worlds apart. It was difficult because being able to cover both provided the opportunity into the international squad, whether you felt comfortable on one side or the other.

“It’s easier to cover loosehead if you’re playing tighthead, but the opposite is almost impossible. I’ve had a lot of sleepless nights and anxiety over playing loosehead and trying to catch up at tighthead over a few training sessions in international camp.

“Even with muscle memory and how your shoulders react to looseheads staying up and tightheads staying down, where your weight and balance is are extremely different.”

Thriving at Ulster, Tom went on to feature during Ireland’s memorable 2009 grand slam win in that year’s Six Nations championship.

“We never felt we were going to lose. That was one of Ireland’s golden generation, so to be part of it, I was pinching myself.

“My first full cap was during that campaign against Italy. I’d only been playing rugby for four or five years, so still learning how to play. I was overawed being with guys that were my idols, like John Hayes.

“I didn’t enjoy that campaign, because I was absolutely shitting myself most of the time about coming on and doing as good a job as the other guys.”

The Queenslander was also named in Ireland’s 2011 World Cup squad, playing in the 15-6 win over his compatriots, which resulted in a seemingly preferable quarter-final tie against Wales.

“I came on not long to go against the Wallabies. This was going to decide the pool winners. It was a nerve-racking scrum after scrum on our five-metre line, doing whatever you can to first hold the scrum and then keep them at bay.

“Ireland were great as underdogs, but whenever we were favourites it messed with our psyche. Wales had a point to prove and were very experienced. It was a difficult game, but Ireland were good enough to have won.

“We were prepared for battle but caught off guard and it slipped away.”

Another highlight was when Court got called into the British and Irish Lions squad as cover for the 2013 series in his home country.

“You could have thrown a blanket over Joe Marler, David Kilcoyne and myself. Joe was still on his way up and David was playing well for Munster and Ireland, where he and I were behind Cian Healy. That I was already there might have been the clincher for Warren Gatland.”

From obscure beginnings to seeing out his career by helping London Irish return to the Aviva Premiership at the first attempt, in 2017, Tom defied the odds by achieving so much following a belated rugby introduction.

“Whether the timing was fortuitous, people don’t see the hard work to become successful,” he says. “Early on I went to New Zealand to learn my job and put everything else on hold. Even at Ulster, Matt Williams came in and I begged for an opportunity. He gave me a run and then I started for Ulster for the next six years.

“You must have sheer bloody-mindedness that you’re going to make it, no matter what.”