Justin Longmuir looked to be off to a poor start as they fell as much as 28 points behind Essendon in their Round 1 clash, only for them to storm back and fall short by just six points.

It’s a new beginning for the Dockers in 2020, but with a dual-Brownlow medalist at the club, the pressure’s on to rise quickly.

Here are four burning questions for Fremantle as we approach the resumption of this season.

1. How different will we look under Justin Longmuir?

Ross Lyon’s penchant for defence above all else is well documented and immense fan dissatisfaction with his results and outdated style was reportedly a factor in his dismissal last year.

In comes former Freo player and Collingwood assistant Longmuir to right the ship.

As dramatic as Freo’s drop-off in 2016 following a minor premiership the previous season was, it’s easy to forget they were very close to a finals appearance in 2019 before the wheels came off late.

They may have been the second-youngest and second-least experienced side in Round 1 – and a full 19 games less experienced that the next side at that – but they’re coming off a season where expecting some improvement isn’t all that foolish.

The simple fact is the Dockers need to become a more serious threat up forward. So much of their trade activity over the last few years screamed ‘we want to kick more goals’ and that simply hasn’t happened. They finished in the top eight in scoring just once in Lyon’s tenure – a seventh-place finish in 2014.

Last season, they held their opponents to under 70 points on nine occasions, but only won five of those matches. That’s ridiculous. Changing that trend over the course of 2020 should be Longmuir’s main focus. 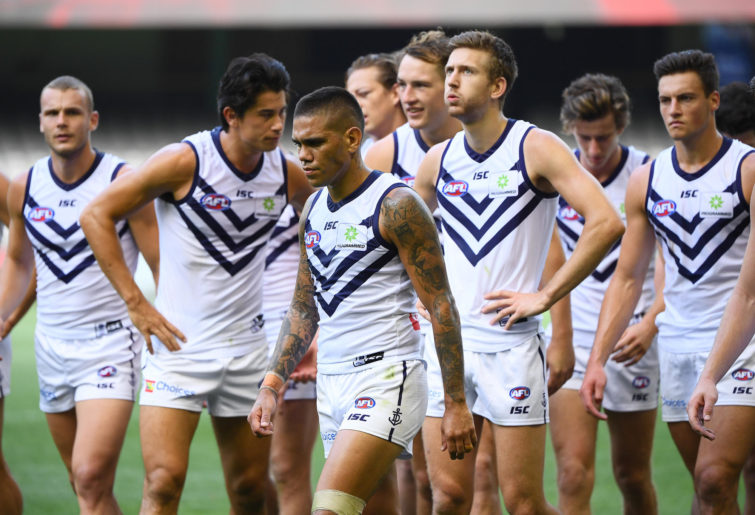 2. Do hubs hurt us more than anyone else?

Freo’s youth wasn’t that big of a deal for Round 1, but you could make an argument they’ve been hurt the most by the AFL’s Queensland hub solution to Western Australia’s strict border regulations.

Unlike their crosstown rivals West Coast, the Dockers didn’t get to play at home in Round 1 and now, after an extended layoff, play four consecutive matches in Queensland – with no guarantee of a return to Perth afterward.

Any club under a new coach has already been disadvantaged majorly by the shutdown, but Freo are far and away the youngest of this year’s group as it is.

It may have been Lyon who coined the “anywhere, anytime” mantra during the club’s run to the grand final in 2013, but Longmuir may have to readopt it if he wants to avoid a catastrophic start that could doom his side quickly.

3. What’s going on with Jesse Hogan and what’s plan B up forward?

The 2015 rising star winner has had a downright awful run of it since, with his debut season at the Dockers ruined by a foot injury – limiting him to just 13 goals in 12 games – while an extended mental-health break makes it unlikely we’ll see him back to his best in 2020.

Last season it was Michael Walters (40 goals) and Brandon Matera (30) doing the heavy lifting, although Cameron McCarthy’s return of 19 from 12 games could be a promising sign of things to come.

Debutant Sam Sturt looked excellent in his debut in March, kicking three, but he’s a few centimetres short of being able to play the key forward role.

The best-case scenario is Hogan coming back breathing fire, McCarthy and Matt Taberner breaking free from their injury woes and delivering on the promise shown earlier in their careers, and Rory Lobb recovering from a slightly down year.

But that’s a lot of ifs. It’s likely Freo will still have to get by with a strong set of small forwards.

Anything newcomers James Aish and Blake Acres can do on the wing – as well Brett Bewley, who impressed in Round 1 – and allow Walters to spend more time inside 50 helps.

4. Can we still win a flag with Nat Fyfe?

Alternatively, this can be rephrased as: how far away are we from a premiership?

Now, I’m not suggesting the Dockers should trade Fyfe, nor am I suggesting he’s close to retirement. He will be 29 at the end of this season, but he’s a strong-bodied inside midfielder with great hands and hardly any pace to lose – he could dominate for another five years.

But all good things come to an end and, for a club with just seven players who’ve played at least 100 games, you have to start wondering whether the rest of the list will be good enough in time for him to lift the cup in purple.

Freo got good compensation for Brad Hill and Ed Langdon last trade period but, while you’ve got Fyfe in his prime, is an assortment of good picks really what you want?