Here’s who I think forms the greatest XI this century.

1. David Warner
Just edging out current coach Justin Langer, Warner has transformed from a power hitter into an all-forms superstar, adapting well as a Test cricketer despite the 2018 controversy. With a batting average of 48.94 and Australia’s second highest Test score of 335 not out, he’s managed 30 fifties and 24 hundreds in 155 innings, with a strike rate of 72.85 as well.

2. Matthew Hayden
Another player who had a heap of power up his sleeve, Hayden was a part of Australia’s greatest opening pair. With Hayden being the muscle and Langer being the class, the Queenslander dominated every team in his path, averaging 50.74, while getting 29 fifties and 30 hundreds, including Australia’s highest Test score of 380 in Perth against Zimbabwe.

3. Ricky Ponting
One of the greatest cricketers of the modern era and in Australia (behind Don Bradman), Ponting transformed the way number three batsmen think and play. With an average of 51.85 and a highest score of 257, he’s scored the third most Test hundreds in the history of the game as well as having the most hundreds for Australia at 41. He also has 60 fifties to his name.

4. Steve Smith
Some might say this is also controversial, but Steve Smith is the definition of world-class. Smith has the second highest average (minimum 50 innings) at 62.84, behind only Sir Donald Bradman. Smith has also added 29 fifties and 26 hundreds to his name, despite starting out as a leg-spinning all-rounder.

5. Steve Waugh
One of Australia’s greatest captains of all time, even in the twilight of his career, Waugh was still kicking. Averaging around 55 in the later stages of his career, he had a magnificent career before nonetheless, averaging 51.06, scoring 50 fifties and 32 hundreds, including a high score of 200 in 260 innings.

6. Michael Clarke
Just edging out long-time teammate Michael Hussey, Clarke was a classy and versatile batsman, able to bat anywhere from opening to number seven. With an average of 49.10, he had 27 fifties as well as 28 hundreds, his highest score being 329 not out. He even has 31 wickets to his name in 65 innings, with an economy of 2.91, an average of 38.19 and two five-wicket hauls.

7. Adam Gilchrist
Perhaps the greatest wicketkeeper for Australia and across the globe, Gilchrist revolutionised the way keepers batted with his aggressive style. Averaging 47.60 across 137 innings along with a strike rate of 81.90, he got 26 fifties as well as 17 hundreds, with a high score of 204 not out. He was also the first batsman to hit 100 sixes, and has 416 dismissals (379 catches, 37 stumpings) to his name.

8. Mitchell Johnson
It was a tough one between him and Brett Lee, but Johnson edges out the former NSW quick. With his lightning speed combined with his bounce, especially in 2013-14, Johnson took 313 wickets at an average of 28.40, along with 12 five-wicket hauls at an economy rate of 3.33. He also has the one hundred to his name, along with 11 fifties. 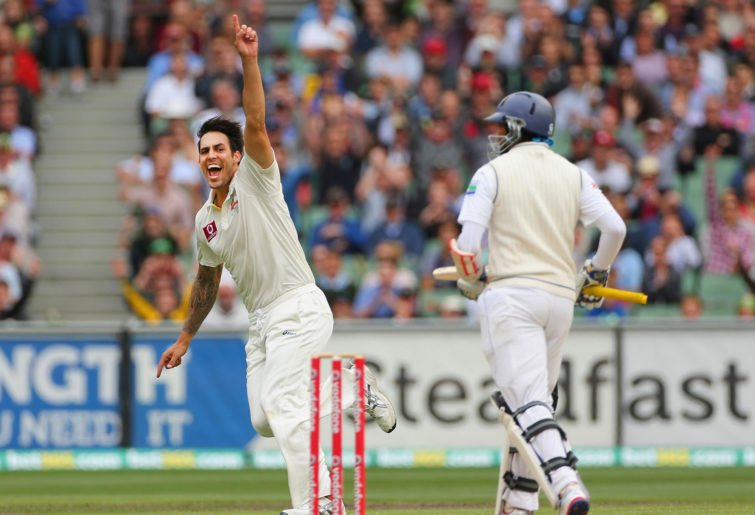 9. Pat Cummins
Currently the number one bowler in Tests, Cummins has speed and class written all over him. He already has 143 wickets in only 44 innings, he’s got a strike rate of 47.2, an economy of 2.76 as well as an average of 21.82 (just a fraction behind Glenn McGrath). Also has five five-wicket hauls along with two fifties.

10. Shane Warne
One of the greatest bowlers of all time, Shane Warne spun heads both on and off the field. With 708 wickets up his sleeve at an average of 25.41, he had a strike rate of 57.4 as well as an economy rate of 2.65 along with 37 five-wicket hauls. He was also a decent batsman, scoring 12 fifties with a highest score of 99.

11. Glenn McGrath
Considered one of the greatest fast bowlers of all time, McGrath is the most lethal and accurate bowler anyone has ever seen. With 563 in 138 innings, he also had an economy rate of 2.49, along with a strike rate of 51.9 and that superb average of 21.64. He also has the third most ducks in Test history with 35.

12th man: Michael Hussey
Debuting in his early 30s after 11 first-class seasons in WA, Mr Cricket is another man who had both power and finesse. Often teaming up with Clarke and Ponting in the middle order, Hussey averaged 51.52 in 137 innings, scoring 29 fifties along with 19 hundreds with a high score of 195. He also got seven Test wickets at an average of 43.71 and an economy of 3.12 in 32 innings.