They made last year’s second-place side look second-rate after the first quarter, powering away to a 28-point win.

It’s an interesting time to be a Hawthorn fan. The triple-premiership era is slowly fading away, but they look like they’re building for another serious crack.

Here are four burning questions for Hawthorn as season 2020 gets back underway.

1. How much better does Tom Mitchell make us?

In 2018, Hawthorn went 15-7 – including a record of 10-2 to finish the home-and-away season – and finished inside the top four. Tom Mitchell averaged 35 disposals and six tackles per game and won the Brownlow medal.

In 2019, Mitchell broke his leg at training and missed the year. The Hawks fell to 5-9 and while they recovered to finish 11-11, they missed the eight.

Was that drop off entirely due to the absence of ‘Titch’? Not entirely, but it was a huge factor – he’s that bloody good.

He barely missed a beat in his return to the big stage back in March, collecting 25 disposals and nine clearances; a pivotal effort in that win over Brisbane.

The Lions will be a hard team to read this season, and they play terribly at the MCG. Hawthorn also crushed the Crows in Adelaide in Round 1 last season before the wheels came off, so this isn’t definitive proof of a 2020 resurgence.

But adding a Brownlow medalist to your engine room over the off-season tends to work wonders and it won’t be a surprise if this leads to another finals appearance this year. 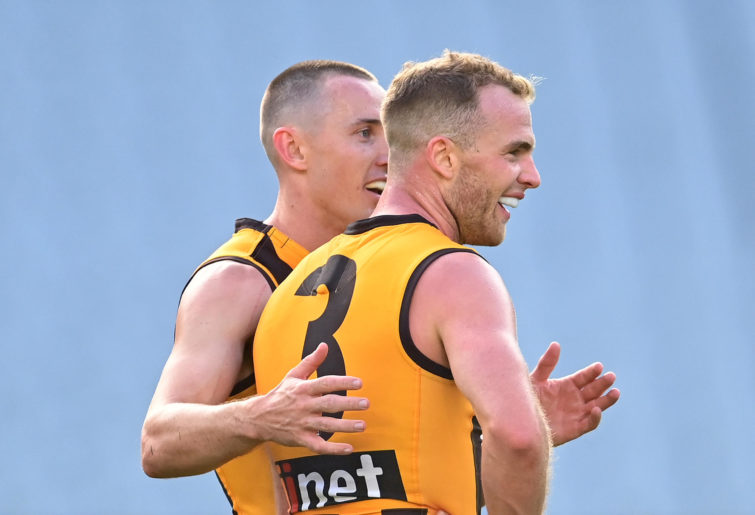 Tom Mitchell (R) returned with bang in Round 1. (Photo by Quinn Rooney/Getty Images)

2. How does the forward line work?

The second-biggest chunk of the 2019 Hawthorn drop-off pie chart would undoubtedly be poor returns from the forward line.

Only three players kicked more than 20 goals. Luke Breust continued to star as a small forward with 34 and Mitchell Lewis broke out late with 20 goals in 12 games, but Jack Gunston’s return of 26 was disappointing – his second down year from the previous three. Paul Puopolo’s ten goals was also the lowest tally of his career since his debut season in 2011.

Jarryd Roughead has obviously moved on, with ex-Giant and former number one draft pick Jonathon Patton the replacement. He put through his first as a Hawk in Round 1, but had very little influence beyond that and is coming off extensive injury history.

Gunston played a lot on the wing and in defence in Round 1, but he’ll need to make a return to the forward 50 and a return to the 50-goal output he’s regularly produced if the Hawks are interested in playing finals.

This one could almost get its own article.

The Hawks were the oldest and most experienced team in the AFL by some margin in Round 1. Their average age of 28 years and one month and average experience of 144.2 games was a full 13 months and 14 games higher than anyone else.

In fact, 2019 was the first time Hawthorn have made a first-round selection since 2015, when they picked the since-traded Burton.

It seems like a very heavy investment in a side that won’t have that much staying power.

Shaun Burgoyne, Paul Puopolo, Ricky Henderson, James Frawley, Isaac Smith, Ben Stratton and Ben McEvoy are all on the wrong side of 30. While the Hawks have done enough to ensure they don’t bottom out when that cohort retires, I’d be stunned if they were still flag contenders when they do – especially given there’s nothing exciting coming out of the under-24 bracket now beyond Blake Hardwick and James Worpel.

A lot of people also don’t realise they haven’t won a final since the 2015 decider. Their two subsequent top-four finishes have both resulted in straight-sets exits.

Clarko could, of course, be playing 4D Chess and be well ahead of everyone else’s thinking, but is there a possibility we’re witnessing a rare misstep in his reign? 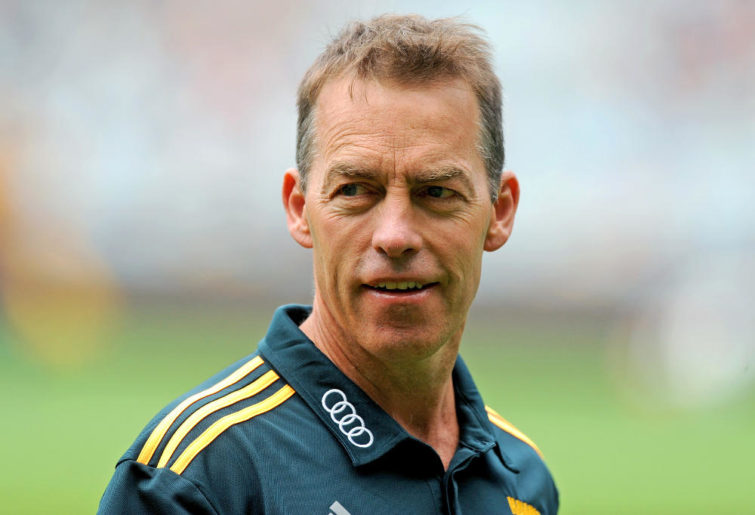 That group of over-30s has a fair few members without a contract beyond this season and given the interesting manner in which Luke Hodge, Sam Mitchell, Jordan Lewis and Grant Birchall have been managed, it’ll be interesting to see who gets re-signed and who gets shipped elsewhere or cut loose.

You’d think Stratton’s in line for a new deal as the skipper, while Burgoyne’s flagrant disregard for the withers of age make his situation impossible to predict. It would also be a bit surprising to see pending unrestricted free agent Smith sign elsewhere.

It’s not as clear on the others. Henderson has only received one-year extensions after the season for a while now and could be on the outer, while Frost’s arrival would make Frawley nervous after he too could only secure a one-year extension last year.