Chuckakhan
Roar Pro
31st May, 2020
4
Join the conversation
Advertisement
Write for The Roar

They have lost two thirds of what made them brilliant to the Tampa Bay Buccaneers with Tom Brady and Rob Gronkowski both signing with them in contentious and acrimonious ways.

They could surprise us. They’ve done it before with a gangly kid taken with pick 199. But in this exponentially more corporate world, they’ll need an experienced head to lead them.

The man to do that – the man to captain this historic franchise – is Colin Kaepernick. 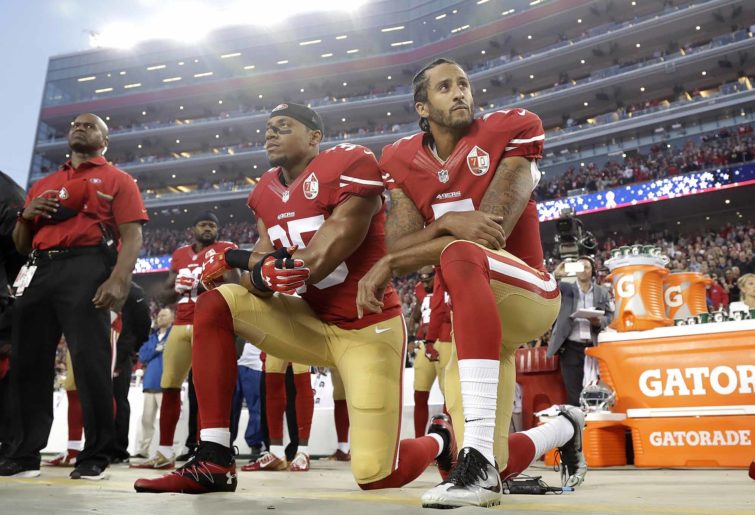 Kaepernick led his San Francisco 49ers to the Super Bowl in 2012, falling agonisingly short of the ultimate glory. He has a record of 12,271 passing yards, 72 touchdowns, and a passer rating of 88.9.

To compare that to the GOAT, it is hardly anything to sneeze at. When you consider that in concert with Kaepernick’s far better rushing stats (2300 yards, 13 touchdowns) and mobility, the case starts to become a little more cogent.

However, Kaepernick had an extremely contentious exit from the NFL, being blacklisted and waived by the 49ers in 2016 in large part due to him taking a knee during the United States’ national anthem. Kaepernick was blacklisted and settled a collusion lawsuit with the NFL in 2019.

Now that’s all over, why should the Patriots sign him?

Hoyer is the most accomplished of these players as a journeyman quarterback who has played second fiddle to Brady for years, but as a result has a Super Bowl ring.

Lewerke and Smith, on the other hand, are both undrafted free agents signed in the spring of 2020. So that leaves lucky number four, Jarrett Stidham, a fourth-round pick from Auburn University in Alabama.

I would not expect the Hail Mary pass to work twice for the New England Patriots, which is fundamentally what they are expecting with the use of Stidham as their first-string quarterback.

So they need someone with experience, and someone who can throw the ball. Kaepernick provides both of those things as a mobile running-and-gunning quarterback.

Additionally, he sends a strong message to the rest of the NFL that the Patriots are willing to be bold and aggressive with their strategies, as well as buying time for the young corps of quarterbacks to develop.

Finally, the signing of Kaepernick sends an important message to the NFL supporters within the African American community. It sends the message that we believe you, we understand your pain, and we are here to help, especially in light of recent events.

The signing of Kaepernick would be the ultimate expression of the league having learnt from their mistakes and would encourage independent thought among their player base.

First things first, Don Bradman is the GOAT of all GOATs. For anyone to argue otherwise is generally pure folly.