No one wins a premiership in May, so why is there a focus on the overall success of a team based off early records?

Below is a list of teams that recorded three losses in a row starting with the opening round, who would later win a premiership title in the last ten years.

Dragons – 2010 premiers, 0-3 losses in 2013
Paul McGregor’s Dragons are currently feeling the heat of a lacklustre performance despite some big signings along the likes of Zac Lomax, Tyson Frizell and Tariq Sims.

The Red V were made an example of by the injury-stricken Warriors in Round 3, and faced similar woes by the Wests Tigers and Penrith Panthers in the two previous rounds.

Let’s take it back ten years.

At the start of the decade, they were minor premiers two years running and could not wait to break a drought that lasted 31 seasons. After making five grand final appearances between 1985-1999, it would be a cruel joke to come so far in 2010 and not win the big dance.

Mark Gasnier made use of a Jamie Soward-kicked goal in the dead ball zone during the first six minutes, but by the second half the Roosters led the side with a joint effort from Todd Carney, Joey Leilua and then-captain Braith Anasta.

Rising up in the second half, Soward’s kicking game was an impressive six from seven, including two in the rain from the touchline. As the siren sounded, the Red V recorded their first grand final win as a joint venture club with a 32-8, a 24-point margin over their Anzac Day rivals.

Only three years later in 2013, they would begin the season with three straight losses, finishing 14th on the ladder overall despite the efforts of their premiership players Jamie Soward, Jason Nightingale and Brett Morris.

Sharks – 2016 premiers, 0-3 2010, 2014 and 2015
Paul Gallen and Andrew Ettingshausen were the stalwarts of the Sutherland Shire, and the latter was recently listed as one of the greatest players in the NRL era to never win a title.

The image of the two embracing after the Sharks 2016 premiership win really did convey the elation and bittersweet pain of all those years Gallen waited as a one-club player to final lift the Provan-Summons trophy.

To get to that point, they just had to keep swimming. 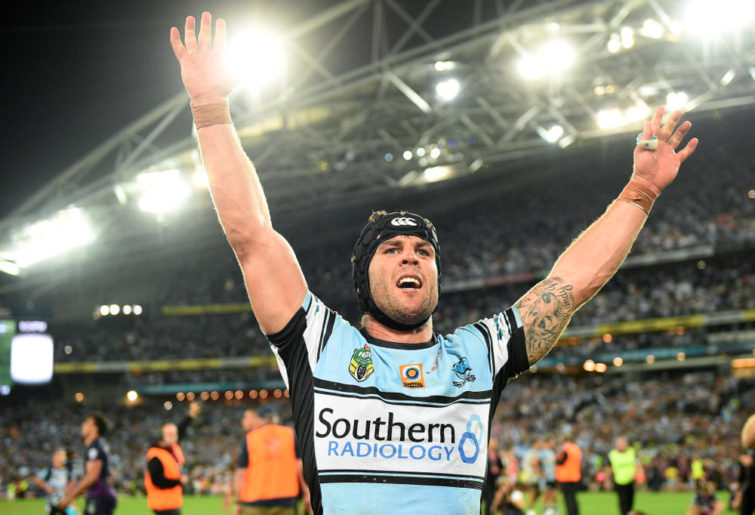 In 2010, they only scraped seven wins and finished just above the Cowboys and the Melbourne Storm (who were wooden spooners for the first time due to the salary cap punishment).

Coaches came and went, and their attack resulted in just 354 points for the season. 2014 was marred by the ASADA storm, the loss of Todd Carney and the resignation of Peter Sharp. However, Valentine Holmes was born out of the ashes and the following year was the top try-scorer.

Cowboys – 0-3 2015, won that same very year
If anybody had prematurely dropped out of the premiership tipping race in 2015, it was the Cowboys. Starting the year off with a measly 4-28 loss to the Roosters, the losing streak followed with the Knights and the Broncos pushing the North Queenslanders to the bottom of the ladder.

The Roosters were the minor premiers that year but the grand final would not host a Sydney team. From Round 4 to 15, the Cowboys were dominant.

They had a narrow loss in the Qualifying Final to their eventual foes in the grand final, the Brisbane Broncos.

As gripping as the 1989 and 1997 ARL grand finals, Johnathan Thurston’s right boot sealed the deal in extra time after neck and neck tries from both sides.

His Clive Churchill medal was well-deserved.

Two years before their back-to-back wins, the 2016 side had Latrell Mitchell in the number one jersey but without the terrific trio of Roger Tuivasa-Sheck, James Maloney and Michael Jennings, the side were only one place from the bottom by season’s end.

Only three years prior, the Tricolours added another trophy to their Bondi cabinet. The high of three-straight minor premierships would come to an end eventually, but not as dramatically as that.

Of course, their grand final wins in 2018 and 2019, has some fans excited for a three-peat. Their current tenth place position does not promise anything just yet, but as this article indicates, early losses can be turned on their head.