In 2019, Springbok forward Pieter-Steph du Toit was deservedly elected (men’s) World Rugby Player of the Year only 24 hours after he had played a major role in dismantling England’s World Cup dreams in Yokohama.

Du Toit is probably the best player in South Africa and the top forward in international rugby over the past two seasons. At 27 years old, he is at the peak of his powers. His profile is so visible that the recent contractual negotiations with his home union Western Province rapidly became a topic of international interest. If a current Springbok of du Toit’s stature moves abroad, it is a world-shaking event.

Du Toit terminated his existing contract with WP Rugby on 14 May at the end of a 21-day window which allowed players to opt out of a collective bargaining agreement (CBA) mandating salary reductions during the COVID-19 sporting hiatus. For the top players in South Africa earning over R2m ($AUD170K) per annum, this amounted to anywhere between a 25per cent and a 43per cent wage cut.

Du Toit’s situation contains some crucial differences. The 21-day window was, in fact, a transfer deadline, with the termination of an existing contract at home dependent on receiving an offer from abroad. Despite keen interest from a number of French Top 14 teams, du Toit’s agent Gerrie Swart has made it clear that it was always the flanker’s intention to stay in South Africa.

So, while the majority of du Toit’s teammates at WP and the Stormers were biting down hard on the salary reductions, his agent was busy renegotiating the contract to increase his income dramatically.

The main source of that increase was the disentangling of what are known as image rights from salary. If a player controls his own image rights, he can use it to advertise for a corporation, for example, and receive the income from that directly. 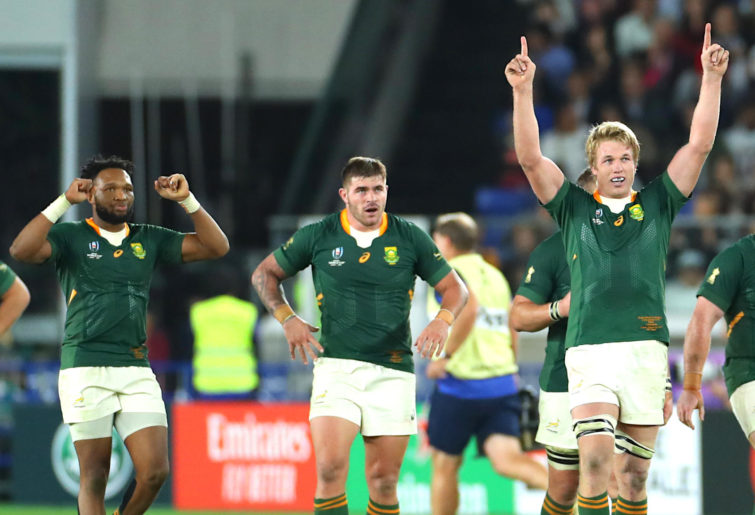 They are therefore a very important income stream for high-profile sportsmen and women. At the peak of the Saracens salary cap drama in the UK, one of the main bones of contention was the club’s overpayment for a stake in Maro Itoje’s image rights company.

In the Republic, there is a collective agreement managed by the MyPlayers rugby players association, with the trade union receiving R90m annually (AUD $7.7m) from SA Rugby in return for access to the image rights of all of its players. That money is then ploughed into insurance and player welfare funds.

The separation of Pieter-Steph du Toit’s image rights from the union agreement sets a precedent as significant as Saracens’ overpayment for same to Maro Itoje. There is a clear and present danger to an agreed, sustainable wage structure, as well as the power a players’ trade union is realistically able to wield in negotiations.

There is no doubt about Pieter-Steph du Toit’s worth on the field, whatever the debates about monetising it at a time of crisis. The essence of du Toit’s value is he is a very big man (6’7 and 120 kilos) who can run and sustain the aerobic efforts characteristic of a much smaller, lighter player.

Both his ability to accelerate and sustain speed, and his rate of recovery from intense efforts, are truly remarkable. They are so significant that South Africa can afford to subtract him from the lineout on attack and defence.

In the World Cup final against England, du Toit did not receive one lineout throw and spent most of his time out in midfield on first phase lineout defence.

Pieter-Steph du Toit has a unique ability to run further and faster than most other big men, and the size and power to really make it count when he arrives. Although Duane Vermeulen picked up the player of the match award in Yokohama, it was du Toit who set him up for success.

Most players are expected to make approximately 30 sprints of 10-30 metres per game. Du Toit made 26 important sprints on defence alone in Yokohama, and his work in leading the defensive line was key to the Springboks’ victory.

It all began at restarts:

Du Toit is positioned on the wide right because he can comfortably keep pace with South Africa’s flyer on that wing, Cheslin Kolbe. In both instances, the blond Bok flanker runs past Kolbe by the end of the play to pressure the receiver and force turnovers. Two sprints, two changes of possession.

Instead of being asked to compete on opposition lineout throw, du Toit was for the most part required to lead the line up in midfield against England:

Despite the attentions of both number 7 Sam Underhill and number 13 Manu Tuilagi, du Toit has not been effectively removed from the tackle zone, and is still on his feet and able to slow down the ruck delivery at the end of the play: 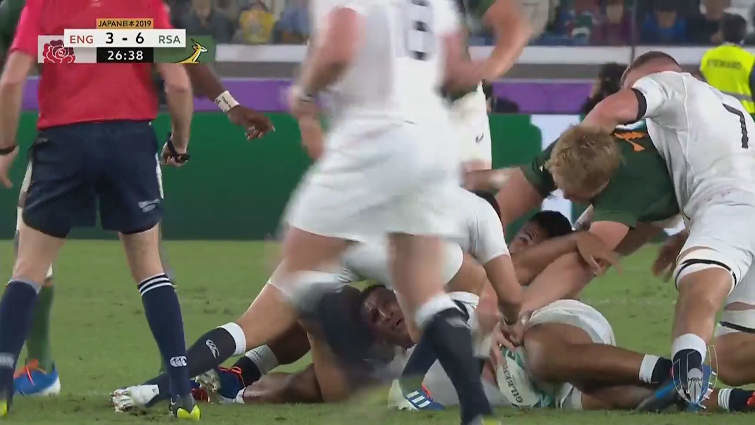 Springboks defence coach Jacques Nienaber had du Toit line up at third defender, opposite England’s first receiver whenever possible in open play. It was the Bokke breakaway who set the line-speed and pressurised either George Ford or Owen Farrell – and that is usually the task of the openside, not the blindside flanker:

Ford is at his most threatening when he can take a step directly towards the defence before passing the ball, but du Toit’s speed off the line denies him that luxury. The pressure is still tangibly there on the next phase, with England fullback Elliot Daly unable to drop back to a safe distance to make the kick.

The speed du Toit brings off the line is such that Ford can only hand on pressure to Daly. The extra men on the outside are an illusion, and the next ruck ends up being set no closer to the South African goal-line than the previous one. Four passes across field, two of them risky, for zero result.

The importance of du Toit’s ability to rush on Ford’s outside shoulder cannot be overstated: 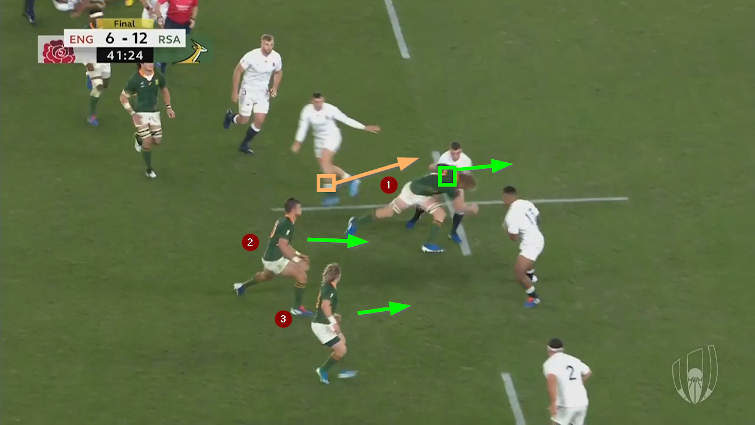 If the rush comes from the inside, Ford may still be able to take that first step forward, or manoeuvre towards space on the outside of the field. That, in turn, would commit the South African defenders beyond du Toit to a more passive, drifting attitude. Because he is running straight through Ford’s outside shoulder, it brings the Bokke wide defenders up square and straight to the target: 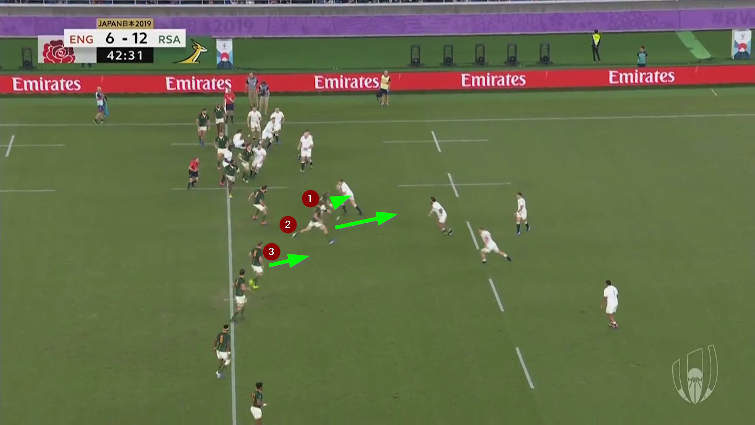 Here it is the combination of Faf de Klerk and du Toit on the rush, forcing Owen Farrell back inside and keeping the defenders outside them on that straight bead upfield.

Du Toit’s recovery rate is such that double involvements are no problem for him:

The Springbok number 7 is rushing out of the line well beyond first receiver, but he is already back in position to tackle Tom Curry on the next phase, holding him up with Damian de Allende to effect another turnover via scrum: 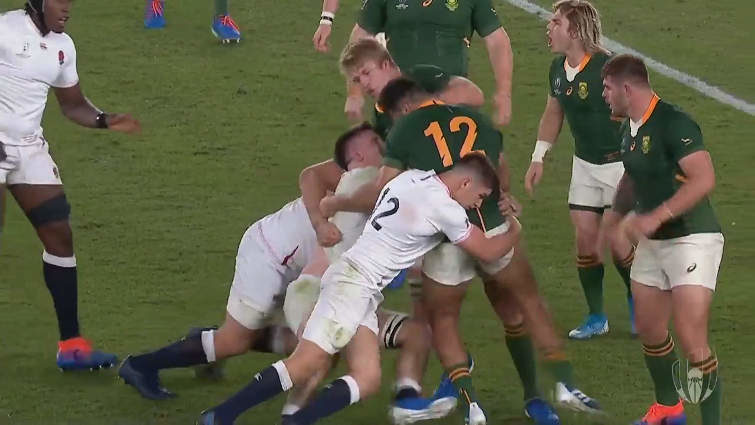 It was a moment symbolic of the match as a whole. England’s second openside flanker (Curry) and second playmaker (number 12 Owen Farrell) have been overwhelmed at the point of contact by the superior size and physicality of a flanker in a second-rower’s body (du Toit) and a boulder of a man in the centre (de Allende).

Du Toit’s extraordinary recovery rate enabled him to keep up the pressure for the whole 80 minutes:

Pieter-Steph still has the energy to rush Farrell on two successive phases in the 76th minute of the match, funnelling him into the grateful arms of Franco Mostert. When Ben Youngs tried to step up the speed of the game via a tapped penalty, it was du Toit who was the first responder for the Boks:

He not only gets to Anthony Watson, he forces the fumble and another turnover too: 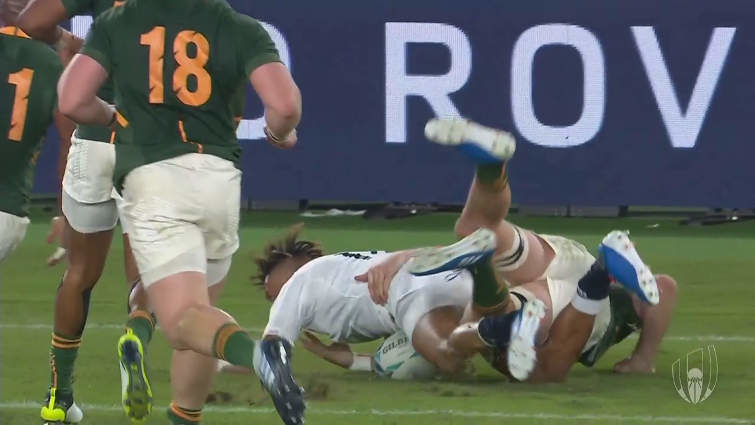 It was only natural justice that Cheslin Kolbe’s try, which finally put the game away, was be provided by the man whose running power had contributed so much to the South African cause:

Du Toit runs all the way across the field from his post at second defender to take Lukhanyo Am’s pass and make the scoring delivery to Kolbe.

Summary
World Rugby Player of the Year Pieter-Steph du Toit may never have had a real intention to leave South Africa or the Stormers. But the manner in which his existing contract was renegotiated at a time of financial crisis has raised some important issues for the future of rugby.

His home union (WP Rugby) is potentially in breach of two CBAs – one related to the acceptance of pay cuts across the board in South African rugby, and the other to the control of image rights by the South African players trade union.

If du Toit and his agent have indeed set a new precedent, it is one that will threaten eventually to separate the elite from the journeyman rugby player, and sieve the haves from the have-nots. Saracens’ overpayment for a stake in Maro Itoje’s own image rights company follows the same thread.

In England, that will conflict with the need for a reduced salary cap in the Premiership in the very near future, and a new world in which even England captain Owen Farrell has reputedly been asked to offset as much as 90 per cent of his salary over the next 18 months.

There is no question of Pieter-Steph du Toit’s value on the field. He is quite simply the best mobile big man in the game. What wouldn’t New Zealand or England have given for his presence at the World Cup?

And therein lies the crux of the problem. It’s one thing to have undoubted worth, it’s another to leverage that value when the collective is suffering as badly as it is right now, all across the world.