These are leagues that are usually dominated by only a handful of teams fighting for national glory and the single spot reserved for them in the UEFA Champions League.

There are many of these star-breeding teams that reside outside of Europe’s top five national leagues. But for now, I am focusing on Portugal’s Liga Nos, and in particular the plethora of world-class players that have been produced by Lisbon’s SL Benfica.

The following is a starting team of the best players sold by Benfica in recent years.

Jan Oblak – Atletico Madrid
The last two seasons have not seen a better goalkeeper than Jan Oblak. Still only 27 years old, Oblak effectively dictates a game’s result and is the only goalkeeper with a top-20 nomination for this year’s Ballon d’Or.

Oblak made the move to Atletico Madrid in 2014 to replace a London-bound Thibaut Courtois. In his final season with Benfica, Oblak was pivotal in securing the Portuguese treble.

Since his move, Jan Oblak has won the UEFA Europa Cup and the Spanish Super Cup while making his name as the world’s best in his position.

João Cancelo – Manchester City
Cancelo was brought over to Manchester City as a direct replacement for attacking fullbacks Benjamin Mendy and Kyle Walker. João Cancelo showed great attacking prowess in his league-winning season with Juventus, which earned him a big-money move to the world’s most expensive side.

Cancelo was also a part of Benfica’s treble-winning season before making a single-season move to Juventus. In Italy, the attacking fullback shot to stardom. He was able to secure both the Scudetto and Italian Super Cup. Cancelo proceeded to add the English League Cup to his list of accolades after a turbulent first season in Manchester.

Lindelof is yet to win silverware since moving to England but has become a regular starter and an important player for United.

David Luiz – Arsenal
David Luiz has enjoyed an illustrious career that has seen him earn trophies across two of Europe’s top five leagues. He is a defender that for a long period of his career was considered one of the best and most desired in world football. 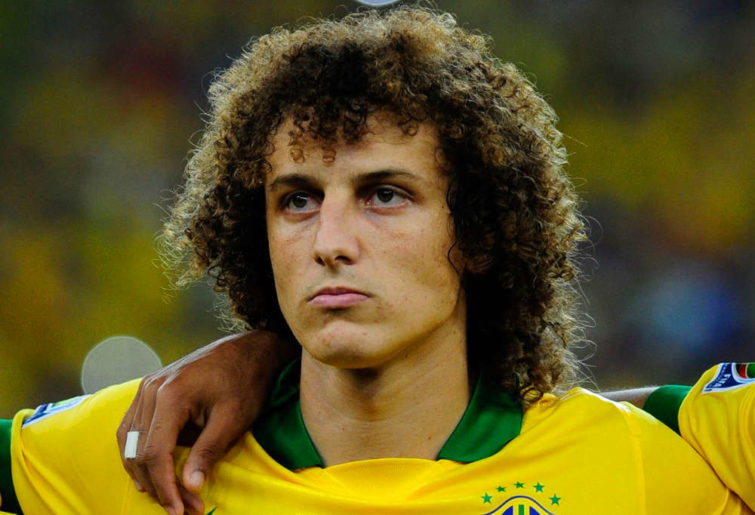 During his tenure with Benfica, David Luiz won the Portuguese League along with three Portuguese League Cups. The Brazilian made the move from Portugal to England in 2011 where he enjoyed two separate spells with Chelsea. In London, Luiz won the EPL once, the UEFA Champions League, two FA Cups, and added two UEFA Europa League triumphs.

Now approaching the latter stage of his career, Luiz resides in north London with Arsenal, where his form has remained consistent but he is yet to make a real impact or win any silverware.

Nelson Semedo – Barcelona
Nelson Semedo has fast become one of the best right fullbacks in world football. Earning himself a starting role for the Catalans has allowed the Portuguese defender to grow in both confidence and ability with a supporting cast like few others.

Before crossing to Spain, Semedo won back-to-back league titles with Benfica to go with a Portuguese Cup and Portuguese Super Cup.

Axel Witsel – Borussia Dortmund
Axel Witsel has been one of the most consistent midfielders over the past five years. The engine behind his team, it seems that any club that employs the Belgian has a fighting chance of achieving greatness.

Witsel began his professional career with Standard Liège of Belgium’s top flight, before making the move to Benfica in 2012. Already gaining notoriety for his unique midfield qualities, Axel Witsel won a big-money move to Zenit St Petersburg the following year. His time in Russia saw Zenit win the Russian League once, two Russian Super Cups, and the Russian Cup of 2016.

In his single season with Benfica, Axel Witsel was able to attain the Portuguese League Cup. Spending six years in the Russian port city had no negative effect on the Belgian’s game. In fact, it seemed that his quality improved with Borussia Dortmund employing the midfielder in 2019. So far at Dortmund, Witsel has added the German Super Cup to his trophy cabinet.

Axel Witsel is one of the best midfielders in modern football and is highly capped in a Belgian shirt.

Renato Sanches – LOSC Lille
In 2016, he helped Portugal to their very first international title at the European Championship in France. 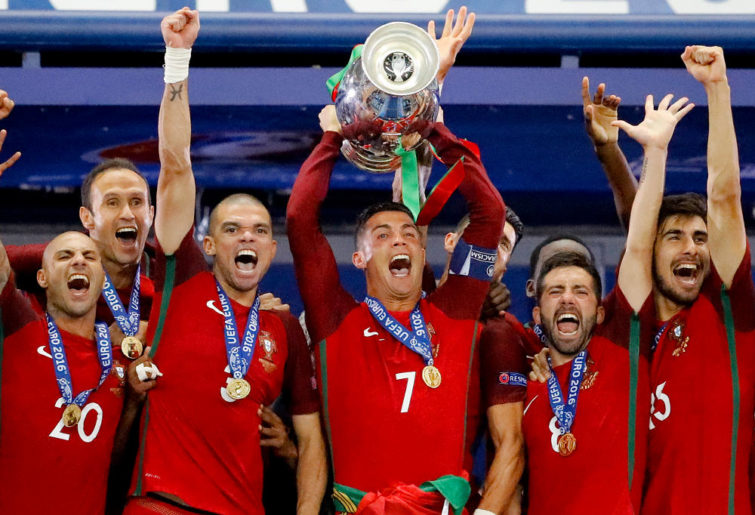 Renato Sanches is a true product of Benfica’s youth academy. Starring in the under-age teams, Sanches’ potential saw him play only one season with Benfica’s first team before being bought by European giants Bayern Munich. In this season he was a Portuguese champion and won the Portuguese League Cup.

Although winning two Bundesligas, one German Cup, and three German Super Cups, the Portuguese midfielder did not perform as expected in Munich and was later sold on to LOSC Lille of Ligue 1.

Now 22, Renato Sanches has rediscovered his form with incredible performances for his current club. His return to top form has Europe’s biggest clubs watching and a big-club move is soon anticipated.

Nemanja Matic – Manchester United
Serbia’s Nemanja Matic is the fourth player on my list to be part of Benfica’s Portuguese treble-winning side in the same season in which he was named Benfica’s player of the season.

His award-winning season with Benfica earned him a move to Chelsea in 2010, where he won the English Premier League and FA Cup in his debut year. Before making the move to Manchester United in the 2017-18 season, Matic won a further two EPL championships to go along with an English League Cup, winning every piece of silverware in England’s top tier.

Yet to win anything at Old Trafford, Matic has remained an important part of United’s rebuilding process.

Bernardo Silva – Manchester City
Bernardo Silva has quickly become one of the best footballers in the world. Manchester City manager Pep Guardiola, alluding to the brilliance of the Portuguese star, has expressed that Silva is always the first name on his team sheet come match day.

The fifth player on my list to win the 2013-14 Portuguese treble, Bernardo Silva’s rapid trajectory saw him complete a move to Monaco after only one season with Benfica’s first team. Silva has recently expressed his admiration for Benfica and says he will soon return to complete unfinished business with his boyhood club.

In 2017 Silva guided Monaco to a shock French championship that ended four years of Parisian domination.

The following year saw the Portuguese player move to England, where he has enjoyed a a successful stint with the Citizens. He has claimed back-to-back EPL titles, an FA Cup, and three English League Cups, including the English treble of 2019. 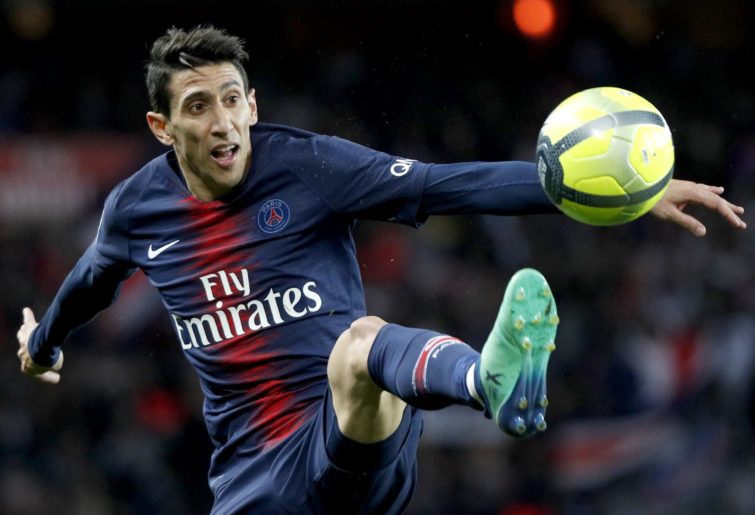 His successful tenure with the Eagles allowed him to win back-to-back Portuguese League Cups and the honour of being named Portuguese champion with Benfica in 2009.

Di Maria moved to Los Blancos, where he joined a star-studded outfit of world-class players. His time in Madrid saw him win La Liga, the UEFA Champions League, and two Spanish Cups. The Argentine then made the move to Manchester United for a single uninspiring season.

Félix was released by Porto at 17 and joined Benfica on a free transfer. The Portuguese star’s only season with the first team saw him almost single-handedly drive Benfica to league success.

In the 2018-19 season, the then-19-year-old forward managed to score 20 goals with 11 assists over 43 games. It is not only the goal contributions but the flair and confidence he exhibited that make him one of the most promising footballers in the world today.

Liga Nos is scheduled to resume on June 4 as Benfica sit one point behind northern rivals Porto. An exciting end to the season looks imminent as both sides fight for Champions League football.