They duly made their ODI debut at the World Cup, losing to Australia by seven wickets in Worcester. Their home turf of the Grange in Edinburgh hosted two of their remaining four Group B fixtures.

The first of these was against Bangladesh, winners of the ICC Trophy, on May 24. Three days earlier, Scotland had given a good account of themselves against Pakistan at Chester-le-Street – they had reduced the opposition to 5-92 before eventually losing by 94 runs in a chase of 262. Having lost their first two games, each of the teams came into this match looking for a maiden win at the World Cup.

This was only the second time that two associate sides were clashing in a World Cup match. As was the case in the ICC Trophy semi-final in which Bangladesh had prevailed by 72 runs, Scottish captain George Salmond elected to field after calling correctly.

A crowd of around 4200 and blustery conditions greeted the Bangladeshi batsmen, who soon capitulated against the pace duo of John Blain and Asim Butt.

The procession began in the third over with six runs on the board, when a short one from Blain induced a catch by Iain Philip at first slip, removing Khaled Mashud for a duck. Six runs later, Mashud’s fellow opener Mehrab Hossain fell to the left-armed Butt, due to a running catch by Nick Dyer. Soon after, skipper Aminul Islam was out leg before to Blain without opening his account, leaving the score at 3-13.

The experienced Akram Khan was also dismissed for a duck, caught by Philip off Butt. When Blain (4-37) castled Faruk Ahmed in the 11th over, the Tigers had crumbled to a disastrous 5-26, and were in dire need of a substantial partnership. It was left to number six Minhajul Abedin – who was dropped by Philip at first slip when on three – to steer the ship, and he found a willing ally in Naimur Rahman.

The duo put on a vital 69 for the sixth wicket, before Naimur (36) was accounted for by James Brinkley. Khaled Mahmud perished to the off spin of Dyer in the following over, registering the fourth duck of the innings. The score was now 7-96, but Minhajul carried on resolutely with support from the tail. He finished with a pivotal 68 not out in 116 balls with six fours, helping Bangladesh reach a fighting 9-185.

The innings included 44 extras, with 28 of them being wides, and the slow over rate meant that Scotland had an over curtailed. The hosts endured a poor start as well, with Hasibul Hossain trapping Bruce Patterson on the pads for nought off the second ball. Hasibul also added the scalp of Mike Smith, caught behind by Mashud, while left-armer Manjural Islam got the better of Philip to make the score 3-8. 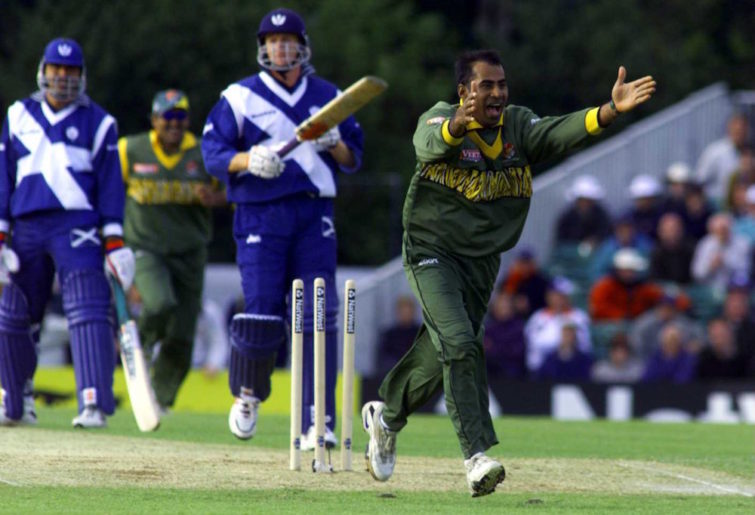 Salmond walked in at this critical juncture, but was fourth out at 37 to give Manjural his second wicket. Minhajul’s off spin added to Scotland’s woes, as it got rid of Ian Stanger to send the score nosediving to 5-49 in the 17th over. All-rounder Gavin Hamilton, batting at number six and fresh from an impressive 76 against Pakistan, revived the crowd’s hopes with another encouraging performance.

The left-handed Hamilton was joined by wicketkeeper Alec Davies at 6-83, and the pair added 55 in 15 overs. Frustratingly for Scotland, it was a run out that broke the stand, as Hamilton, who would go on to make his Test debut for England later in the year, fell short at the non-striker’s end after having hit 63 from 71 balls with four fours and a six. The equation at this stage was 48 in 45 balls with three wickets left.

Davies kept Scotland in the hunt until he became Mahmud’s second victim, eighth out at 158 for a gutsy 32. The last three overs began with 23 runs needed, but Bangladesh grabbed the remaining two wickets off the first two balls of the 47th over. Another run out, that of Blain, was followed by Butt getting caught by Aminul off left-arm spinner Enamul Haque, handing the Tigers a hard-fought 22-run win.

Minhajul was named man of the match. Bangladesh lost their next match against Australia by seven wickets, but ended their campaign on a high with a stunning 62-run win over Pakistan. Scotland’s second home outing was their final fixture against New Zealand, in which they could only muster 121 en route to a six-wicket defeat. Four days earlier, they were bowled out for 68 by the West Indies.

Scotland’s next home ODI after this tournament was only in 2006, when they again gave a scare to Pakistan – chasing 204, the visitors wobbled to 5-94 before winning by five wickets. Later in the same season, they notched their first ODI win, beating the Netherlands by four wickets in a European Cricket Championship match at the Cambusdoon New Ground in Ayr. They are yet to win a match at the World Cup.