There is no two ways around it. They were absolutely demolished by the Roosters. To the tune of 59-0. It’ll go down as one of the worst losses in club history. That’s how bad it was.

The stats don’t make for pretty reading, and nor does the history which was created in the clash.

Not only were the club held scoreless for the first time in their history at Suncorp Stadium, but they have now let in almost 100 points in two weeks, and have beaten by 50 points or more twice in the space of five games, stretching back to last year’s elimination final against the Eels.

Further to that, it’s the most points the Broncos have conceded in the opening four rounds of a season, and their worst points differential in the same time frame.

It was those same men in blue and gold which set alarm bells ringing for Brisbane last week when they picked up a 34-6 win at Suncorp in the first game back from the coronavirus-imposed shutdown of the competition.

While that loss was somewhat forgivable, considering the circumstances attached, last night’s was simply not even close to acceptable.

To be held scoreless by a firing defence of the back-to-back premiers is one thing, but to throw nothing at them in the process is another issue in itself. The proof is in the numbers of the game, with Brisbane failing to seemingly do anything right. 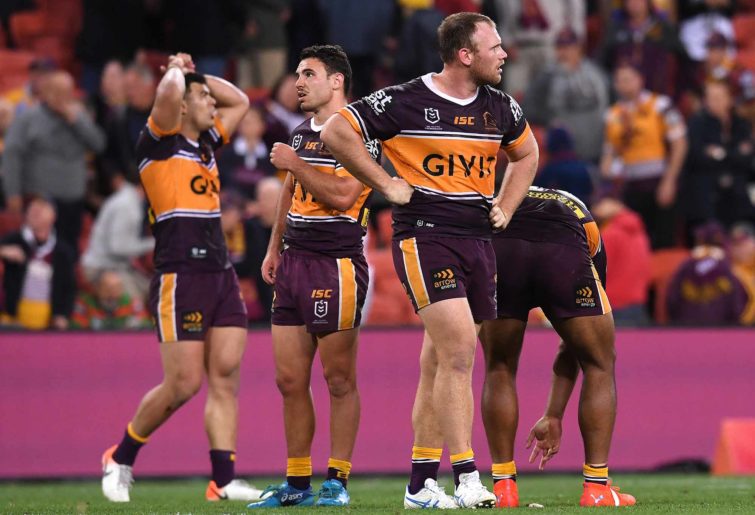 Just 29 sets with the ball, only 20 of them completed, 11 errors, eight penalties conceded, Jesse Arthars sent to the sin bin, over 1200 less running metres than the tri-colours, half the post-contact metres, a single line break against ten, only 60 kick-return metres. You get the idea.

Sometimes, stats don’t tell the whole story of a rugby league game, but on this occasion, they do. They told the story of a team who were well beaten, and for most of the night looked like they’d rather be anywhere else.

That was despite the Roosters being the club who had the disrupted build-up, with superstar James Tedesco ruled out on game day due to a high temperature. And that’s not to mention the other bundle of players who struggled to pass their temperature tests, according to commentators on the Nine Network.

That’s not to say the Broncos didn’t have problems of their own. They did, with David Fifita, Tevita Pangai Junior and Kontoni Staggs among the players who missed the match for the club. It also didn’t help that, the very week after they released Andrew McCullough, Jake Turpin broke his leg, forcing Corey Paix to be thrown into the cauldron on short notice.

So, while this was a young, inexperienced side with players out of position – like young prop Ethan Bullemor in the second row – it simply doesn’t matter.

What’s more, a lack of raw numbers in the forwards isn’t exactly a problem which the Broncos weren’t aware of. In their best 17 at the start of the pre-season, the rest of their 30-man squad had three forwards, and ten extra backs.

That, simply put, isn’t going to get you through a season. In this case, it didn’t even get the Broncos through a month, and while Ben Te’o is going to be a valuable signing, it’s going to take a lot more than that for Anthony Seibold to resurrect things in Brisbane.

And so, that brings us to the coach. The man Brisbane hunted from Souths, landed, then watched fumble with the team last year. They scraped into the finals, sure, but then were blown out in the first week by the Eels to the tune of 58-0.

This is one of the proudest clubs in the game, and that there is no disputing. Without taking anything away from the superb Roosters last night, the Broncos won’t stand for mediocrity, and thus far, that looks about all that Anthony Seibold is going to be able to muster. 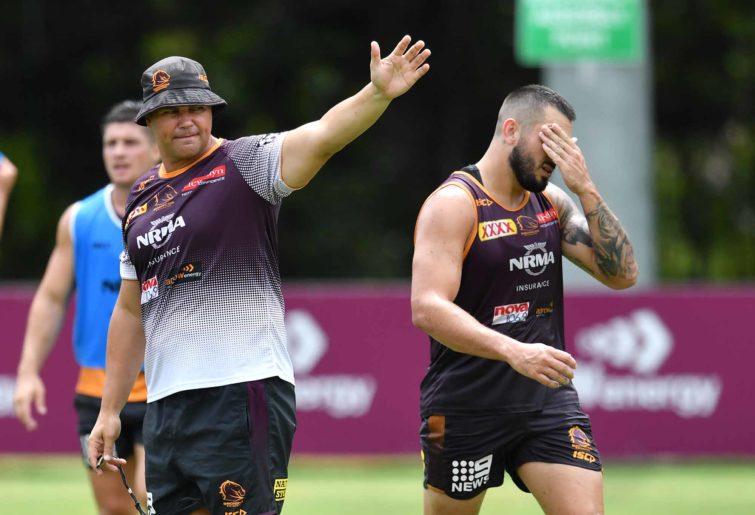 As a coach, he still hasn’t proven he has any grip over how to set up a strong attacking structure, get his players to perform for him when backs are to the wall, or demonstrated any ability to use his interchange bench effectively.

They are all major issues – issues a first grade rugby league coach should have under his grips by the time he has spent as long in the game as the current Broncos mentor. He just doesn’t though, as was evident for all to see last night when the Broncos came out and struggled more after the halftime break.

Not only that, but the manner of some of the tries let in not just last night, but last week as well, were concerning in the most extreme form, with tackles barely being attempted, and the side seemingly having no appetite for the contest.

That speaks volumes about a coach. We are seeing it in the Dragons week in and week out, and it’s only because Paul McGregor has a job that Anthony Seibold isn’t the most under pressure coach in the league.

That’s not to say the Broncos are the worst-performing team in the league, but based on expectations against results, they are right up there, and it’s hard to see the Broncos board standing by their coach without a significant run into the finals this year.

There are testy times ahead in Brisbane. Very, very difficult indeed, and they need a cool head to guide the way through.

A game against Manly on the road next week, followed by the Knights, Titans, Warriors and Bulldogs, with two trips to the Central Coast included, is going to tell us a lot more about whether Seibold is going to still have a job come January next year.

Broncos fans will hope he does, because otherwise, it could be a long winter ahead.