The quadrangular ran from May 28 to June 7, with all seven matches played under lights at the Bangabandhu Stadium in Dhaka. The defending champions were Sri Lanka, who had emerged victorious on their own soil in the previous edition in 1997.

Here is a look back in time at the tournament.

Match 1 – Bangladesh versus Sri Lanka
The hosts, who would attain full membership of the ICC within the next month, took on the holders in the opening game. Heavy rain caused a delay of 24 hours, and when play finally got underway on the next day, Sri Lanka dictated terms after Sanath Jayasuriya elected to field. The Tigers slipped to 3-27 in the 12th over, before opener Javed Omar and Akram Khan (41) put on 75 for the fourth wicket.

The run rate never really got going though, and the final total was a modest 6-175. Omar remained unbeaten on 85, consuming 146 balls. Jayasuriya and Aravinda de Silva replied with 66 for the first wicket, with the latter going on to hit 96 not out in 93 balls, with 13 fours and three sixes. Marvan Atapattu (41 not out) joined De Silva for an unbroken stand of 112 that sealed Sri Lanka’s win by nine wickets in the 31st over.

Match 2 – Bangladesh versus India
Bangladesh produced a better effort with the bat in their second game, but their bowling was found to be inadequate against the blade of Indian captain Sourav Ganguly. Thiru Kumaran (3-54) took two early wickets to reduce the score to 2-30, before Habibul Bashar (57) and captain Aminul Islam (47) shared in a third-wicket stand worth 94. When Aminul was dismissed, Bangladesh were 4-131 in 35th over.

Akram Khan injected impetus with a 52-ball 64, and the last ten overs fetched 97 to take the total to 6-249. Ganguly was in his element, adding 85 in 11 overs with Sachin Tendulkar for the first wicket, 67 with debutant Hemang Badani for the second, and 100 not out with Mohammad Azharuddin for the third en route to 135 not out in 124 balls, with six fours and seven sixes. India duly cruised to an eight-wicket win in the 41st over.

Match 3 – India versus Sri Lanka
Not for the first time, Jayasuriya proved to be India’s nemesis, as he hit 11 fours on his way to 105 in 116 balls. The southpaw set the tone by adding 58 with De Silva for the first wicket, before sharing in a second-wicket alliance of 104 with Atapattu (42). India fought back to leave the score at 6-209, but a seventh-wicket stand of 58 between Romesh Kaluwitharana and Chaminda Vaas bolstered the total to 8-276.

Tendulkar (93 in 95 balls) responded with intent, but lacked support. 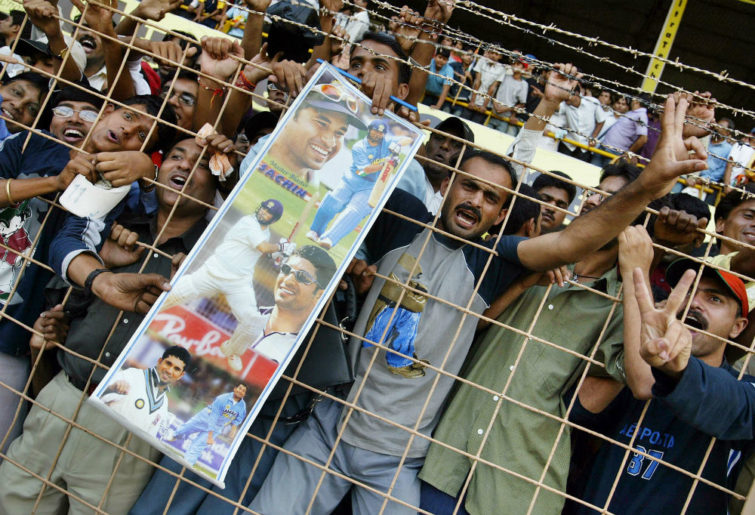 His third-wicket stand of 67 with Rahul Dravid took India to a steady 2-123 in the 26th over, but Sri Lanka kept pinching regular wickets thereafter. Seamer Kaushalya Weeraratne (3-46), who had made his debut against Bangladesh, took three quick wickets, including that of Tendulkar, to hasten India’s slide towards 205 in 45 overs.

Match 4 – Bangladesh versus Pakistan
Pakistan had arrived from the Caribbean just the day before, but made their intentions clear with a record display. In the previous meeting between the two teams at the 1999 World Cup, Bangladesh had notched a stunning 62-run win. However, any chance of an encore was ended as Pakistan built a total of 3-320 – the stage was set by an opening stand of 83 between Saeed Anwar and Imran Nazir.

Nazir (80) further added 75 for the second wicket with Yousuf Youhana (as Mohammad Yousuf was then known), who also scored 80. Youhana put on 78 for the third wicket with Inzamam-ul-Haq (75 not out), who in turn joined forces with Shahid Afridi (45 not out) for a stand of 84 not out. In reply, Bangladesh were routed for 87 in 34.2 overs, with Abdul Razzaq taking 3-5. The margin of 233 runs was then the biggest in ODIs.

Match 5 – India versus Pakistan
Four-time winners India had to win this clash if they were to stay alive for a spot in the final. Anwar and Nazir began with a rapid opening stand of 74, before both batsmen fell in the same over to the leg spin of Anil Kumble (3-43). Soon after, Ajit Agarkar removed Inzamam, while Kumble added the scalp of Afridi, as Pakistan wobbled to 4-103. Wicketkeeper-captain Moin Khan joined Youhana at this stage.

The pair grew their fifth-wicket stand to 92, until Moin was out for 46. Youhana kept going, and ended up with 100 not out in 112 balls, with nine fours and a six off the last ball of the innings. His knock steered Pakistan to 7-295, and to add to India’s woes, a slow over rate led to them losing two overs. Razzaq (4-29) helped reduce India to 4-75, and despite Ajay Jadeja’s 93, the innings wound up at 251 in the final over.

Match 6 – Pakistan versus Sri Lanka
With both teams having qualified for the final to be held two days later, this last league game didn’t have much consequence. Although they rested Anwar, Razzaq and Wasim Akram, Pakistan secured a seven-wicket win to top the table. Sri Lanka suffered five run outs in their total of 192, even as Azhar Mahmood returned a tidy 3-24. Atapattu (62) and Upul Chandana added 62 after coming together at 5-107.

Left-arm pacer Sajeewa de Silva dismissed Nazir with the score at 24 in the fourth over, before the in-form Youhana joined Mohammad Wasim (44) for a second-wicket partnership of 107. Youhana also added 57 for the third wicket with Inzamam, and proceeded to score an unbeaten 90 from 130 balls. Pakistan’s win arrived with only ten balls remaining, but they were in control throughout.

Match 7 (final) – Pakistan versus Sri Lanka
Coming into the summit clash, Pakistan had never won the Asia Cup before – their only other appearance in the final was against Sri Lanka in the 1986 edition, which had resulted in a five-wicket defeat. On the other hand, the Lions had won the title twice, in 1986 and 1997. Anwar guided Pakistan with a steady 82 in 115 balls after Moin opted to bat, and shared in a 68-run stand with Youhana for the third wicket.

By the time Anwar got out, Sri Lanka had managed to keep things pretty tight – the score read 4-173 in the 40th over. At that point, Moin joined Inzamam in the middle, and the duo changed the complexion of the game.

Inzy made 72 not out from 88 balls, while Moin clobbered 56 not out from just 31 balls, as they blitzed to an unbroken fifth-wicket partnership of 104 in the last ten overs to enable Pakistan to reach 4-277.

Sri Lanka stumbled to 3-46 in reply, before Atapattu and De Silva added 71 for the fourth wicket. Atapattu put on another 79 with Russel Arnold (41) for the fifth wicket, and at 4-196 in the 40th over, the game was on. However, the remaining wickets fell for only 42, Atapattu being seventh out for 100 off 124 balls. Sri Lanka were bowled out for 238 in 45.2 overs, thus handing Pakistan their maiden title.

Wasim Akram, Mohammed Akram and Arshad Khan picked up two wickets each in what was a combined bowling effort from the men in green. Moin was declared man of the match for his game-changing innings, while Youhana was deservedly named man of the tournament for topping the batting charts with a tally of 295 runs at 147.50. On the bowling front, Razzaq led the way with eight wickets at 9.25 apiece.