Those readers of my earlier article AFL top 100: Bring on Round 2 (Part 2) would know that I was already set to celebrate Franklin joining a very exclusive list of six players who have already completed the double-trifecta in that they are members of the top 100 lists at two different teams and also the AFL.

Bernie Quinlan, who turns 69 next month, was the first and arguably the greatest to achieve this distinction. He played his first game in 1969 and still today is ranked the tenth greatest game-player and the 11th greatest goal-scorer in the history of the VFL/AFL.

Franklin, when and if he plays his 119th game for the Sydney Swans, will draw level with 1950s player Fred Goldsmith and 1960s Traralgon defender Paul Harrison in 99th position on the Swans’ all-time top 100 game-players list.

Goldsmith was the first and only player to win the Brownlow Medal as a specialist fullback. After his win in 1955, he played most of his footy at full forward and won the club’s goal-kicking in 1957. Goldsmith – who sold his Brownlow Medal in 2000 – died in 2017 aged 84.

Joe Daniher has had a chequered career at Essendon since his debut in 2013, showing some early promise and going on to win the club’s goal-kicking over the next four years. However, since then, long-term injuries – for which Essendon’s medical staff have received some criticism – have restricted Daniher to just the first seven games of 2018 and four out of five games in mid-2019 for a total of 15 goals.

Despite this, his Anzac Medal win in 2017 followed by Mark of the Year and All Australian selection in the same year shows what an exciting player he can be to watch, and the absence of the current leading goal-kickers at both clubs will rob non-aligned fans of some interest.

At Essendon, it appears that Orazio Fantasia will also miss, so the heavy lifting may be left to Anthony McDonald-Tipungwuti.

At Sydney, Luke Parker, Josh Kennedy, Tom Papley and Isaac Heeney will have to carry the goal-scoring load.

The 222 contests between the two clubs has seen a win/loss split of 132 to Essendon, 89 to Sydney/South Melbourne with one draw.

Essendon coach John Worsfold is the most experienced coach in the league (due mainly to his long career at West Coast) but he has a poor record against Sydney’s John Longmire, who will be coaching Sydney for the 200th time next Sunday.

Longmire has won seven of the nine meetings between the two coaches, including the one final in 2015 at the SCG, which Sydney won by 65 points.

Worsfold is in his last year of coaching at Essendon with a succession plan anointing Ben Rutten as his successor, and no doubt Worsfold would like to see the last year of his career finish with success as it is now 16 years since the Bombers last won a final and 20 years since they last won a premiership. Both teams won their first-round matches by small margins and the scene is set for a tight battle for either the Swans or the Bombers to steal the march on a likely final-eight contender.

The celebration of Longmire’s 200th game may be enough to get Sydney over the line in a tight contest.

Tassie turns out for Hawks and Bombers rivalry

It was a capacity crowd for two traditional AFL rivals. And perhaps a reminder for the game’s powerbrokers that the appetite for top-level footy in Tasmania is strong. Tassie turns out for Hawks and Bombers rivalry

"He was pushed out of Hobart!" Commentators horrified as the most obvious free of the year isn't paid

Was this a free kick to Hawthorn’s Tim O’Brien? 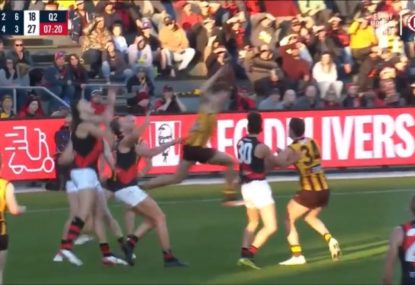 "He was pushed out of Hobart!" Commentators horrified as the most obvious free of the year isn't paid

Essendon Bombers star Zach Merrett has signed a long-term deal to remain at the club, ending months of speculation.

So, we are in the bye round for the Bombers. Instead of writing a match review like I’ve been doing each round, I’ll do a summary of the Bombers season.

Darcy Parish has arrived and the AFL is taking notice

This is the Darcy Parish Bombers fans have been expecting.

Darcy Parish has arrived and the AFL is taking notice

Welcome to the first of the bye rounds.