The Tracker: A-League Round 3

The Tracker from its New Zealand base acknowledges the Wellington Phoenix for its contribution to the A-League.

The club’s motto is “E Rere Te Keo”. It references the Māori history of the taniwha, the great water monster of Wellington harbour. 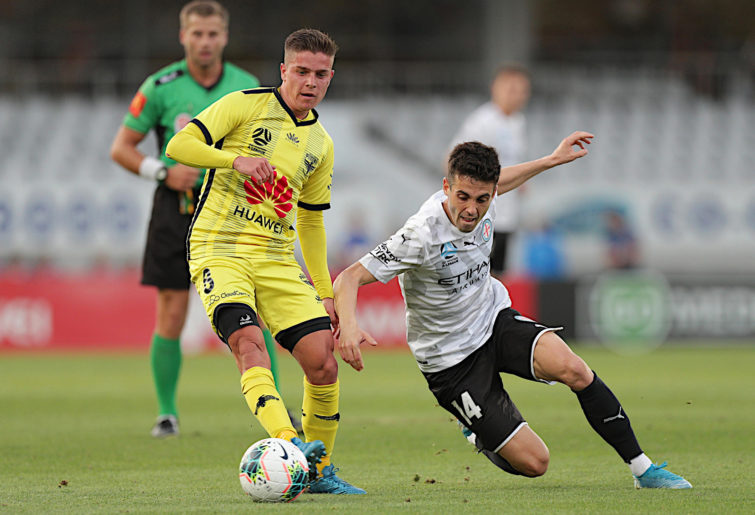 Often a tracked and marked attacker will be thwarted by the tracker’s challenge. But sometimes, despite the best efforts of speedy and alert defenders, the attacker’s guile, pace and skill prevails and a goal is scored. In this analysis the last defender is given credit where it is due under the term focused defence.

In the table below, the goal scored by Andrew Nabbout in the Round 3 match between the Brisbane Roar and the Melbourne Victory was classified in the focused defence category.

A long ball was played out of Victory’s midfield for Nabbout on the right wing to run on to. Nabbout still had much ground to cover to get close to goal. As Nabbout sprinted on with the ball at his feet, Roar defender Macauley Gillesphey caught up with Nabbout. He tracked him very closely and tried everything he could to make the tackle and clear the ball.

It was to Gillesphey’s credit that he did not foul Nabbout. Any greater contact would surely have resulted in a penalty and a red card. Ultimately the defensive effort was unsuccessful and Nabbout’s ability enabled him to score the goal. Gillesphey was fast to his man.

Riley McGree’s second goal for Adelaide United against the Newcastle Jets was scored directly by McGree from a corner. It was another example of focused defence. This time goalkeeper Glen Moss and his defenders did their best to no avail.

Ball watching featured in the two goals conceded by Wellington Phoenix against Perth Glory. These were basic errors in defence with the Perth attackers being given too much time and space. The defenders just weren’t marking tightly enough.

These defensive frailties are not only evident in the A-League. There is no intention here to detract from A-League football. These mistakes are made by all players at all levels from time to time.

Limited top-flight football is occurring around the world presently. However, the whammo of the double cross was evident for the first goal in the recent game between Bayern Munich and Fortuna Dusseldorf, won 5-0 by the Bavarians.

In the match between VfL Wolfsburg and Eintracht Frankfurt, claimed 2-1 by Frankfurt, the winning goal scored by Daichi Kamada of Frankfurt was allowed by Wolfsburg’s Xaver Schlager when he let Kamada slip away.